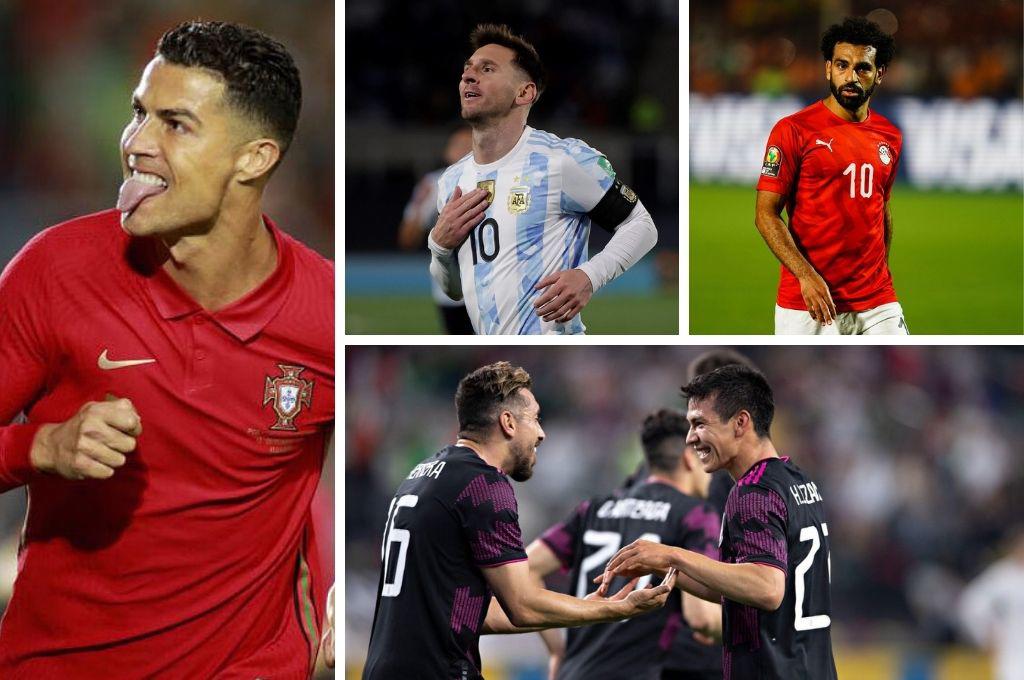 Seventeen tickets are still up for grabs (of the 32 total) for the Qatar World Cup 2022, who will experience decisive matches in the coming days in which the big names are at risk, as is the case in Europe, where Italy or Portugal play it all or nothing.

We present you how is the panorama of the World Cup qualifiers:

Europe:
Participating teams (at the start of the qualifiers): 55
Places for the World Cup: 13
Teams already qualified: 10

At least one of the last two European champions (Portugal and Italy) will not be in qatar. The draw for the European play-off teams was capricious and determined that the Seleçao and the Nazionale, if they make it through the semifinals on Thursday against Turkey and North Macedonia respectively, will have to face each other on Tuesday the 29th directly, with a ticket at stake.

Watch: The millionaire salaries of the PSG cracks come to light; Messi is not the one that receives more

The world therefore in danger for Cristiano Ronaldo or for the European champion Azzurra. If the Turks or Normans surprise, it could be the case that both the Portuguese and the Italians are outside qatar.

Two other tickets will be awarded in the European play-off, but Russia will not have it, after being excluded by FIFA, which directly qualified Robert Lewandowski’s Poland for the play-off final on Tuesday 29, against Sweden or the Czech Republic, who face each other Thursday.

Also on Thursday, Wales and Austria will meet in the semifinal of their draw. The winner will have to wait to meet his opponent in the play-off final, as the Scotland-Ukraine match was postponed to June due to the Russian invasion of Ukraine.

Sadio Mané and Mohamed Salah, the stars of Liverpool, will meet again for a new episode of their duel, after the final of the African Cup of Nations that Senegal beat Egypt (4-2 on penalties after a 0-0 draw).

In their two-way playoff, the first leg on Thursday is in Cairo.

What’s more: Portugal and Cristiano Ronaldo in trouble. The two confirmed casualties that he has for the playoff match against Turkey

Of the ten teams in the ‘playoffs’, only Mali has never played a world. His rival in the decisive pulse for a place is Tunisia.

Morocco is presented as a favorite in the pulse against the Democratic Republic of the Congo.

The other African ticket is decided between two other powers of the continent, Ghana and Nigeria.

qatar already had his ticket in his pocket as the host country of the world. Iran validated theirs in late January and South Korea in early February.

In Group B of the Asian Qualifiers, everything remains to be decided and the battle will end on March 29. The first two get a place for Qatar-2022.

In the lead, Saudi Arabia is just one point ahead of Japan and a four point margin over Australia, which has the opportunity to turn the situation around, as it faces the two teams that precede it in the table in the coming days. .

The two third-placed groups (currently the United Arab Emirates in group A and Australia in group B) would face each other at the end of the qualifiers in a two-legged duel. The winner will participate in an intercontinental playoff, round trip, against a representative from Oceania, South America or Concacaf.

Behind Brazil and Argentina, already qualified for the worldthe fight is exciting in the last two days of the Conmebol qualifiers, where the four best teams have a direct ticket to Doha and the fifth-placed team must play an intercontinental playoff.

Ecuador, third with four points ahead of the fifth, seems close to the world before his displacement to Paraguay.

The other direct qualifying place and the fifth place in the playoffs will probably be decided in a three-way battle between Uruguay, Peru and Chile, which are within a margin of three points, without forgetting Colombia, which retains options, despite being four fifth place points. The Uruguay-Peru and Chile-Uruguay duels, Thursday and Tuesday, could be worth their weight in gold.

Concacaf (North and Central America and the Caribbean):
Participating teams: 35
Places for the World Cup: 3 or 4
Teams already classified: 0

CanadaUnited States and Mexico are in pole position to achieve their World Cup ticket in the Concacaf zone, where a fourth country must play an intercontinental playoff.

Three games remain to be played in the final round of the qualifiers, where Panama and Costa Rica retain options. The Mexico-United States duel on March 24 will be one of the most anticipated of the week.

In recent days a qualifying tournament began in Qatar, with the presence especially of New Zealand, Solomon Islands and Tahiti. The winner of that tournament, designated on March 30, will participate in an intercontinental playoff.

15 of the 32 tickets for the next World Cup in Qatar (November 21-December 18) already have an owner: in addition to the host country (classified ex officio), the owners of 14 places have already been decided, 10 in Europe, 2 in South America and 2 in Asia:

17 tickets are defined: The countries that will fight for the classification and the 15 that are already in the World Cup in Qatar