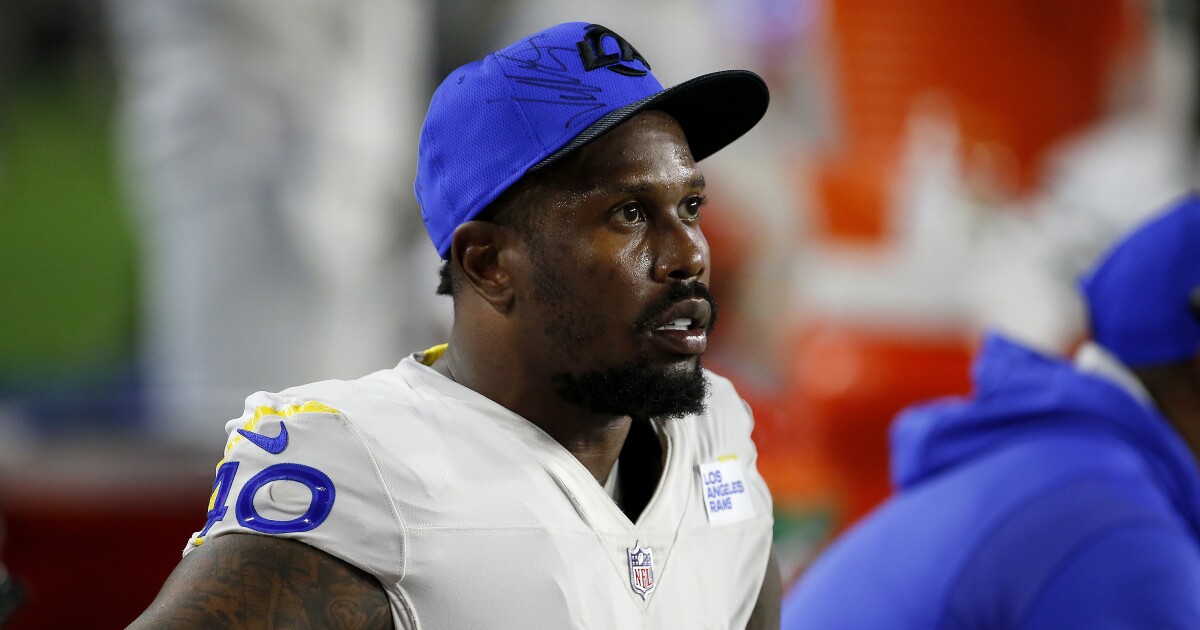 The Rams’ COVID-19 outbreak continued Thursday, with nine more players added to the league’s reserve / COVID-19 roster, potentially affecting the status of the game scheduled for Sunday against the Seattle Seahawks in the SoFi Stadium.

The Rams’ coaches and players were unavailable to the media Thursday. But the team has been in contact with the NFL to weigh the options – including the issue of not having enough players available for Sunday’s game – a team spokesman said before the latest additions to the roster were announced.

The Rams are one of seven NFL teams on intensive COVID-19 protocols, which require virtual meetings, the use of face masks and other actions.

The Rams closed their Thousand Oaks practice facility on Tuesday and Wednesday, with plans to hold a jogging Thursday. The meetings were held virtually and the players were tested for COVID, but the jogging it was canceled, the spokesperson said.

Rams coach Sean McVay has said that all but one Rams player is fully vaccinated. Players on the reserve / COVID-19 list have their vaccinations complete, the spokesperson said.

The NFL announced updated protocols Thursday that include changes to “how fully vaccinated players can be screened for COVID-19 and return from quarantine more quickly,” reported NFL.com.

If a player or staff member is fully vaccinated and asymptomatic for at least 24 hours, they could return from quarantine the day after their initial positive test, the report stated.

In 2020, the NFL rescheduled several games due to problems with COVID-19. But that was during a season in which fans were not allowed to enter most stadiums due to the pandemic.

Doing so this season could require greater logistical challenges.

Because the Rams’ facilities have been closed, the team’s coaches have been unable to treat injured players, the spokesman said.

The tackle star Aaron Donald and center Brian Allen, for example, were listed as limited in Wednesday’s injury report due to knee problems.

The Rams are coming off a 30-23 win over the Arizona Cardinals, a game they won hours after learning that Ramsey and tight end Tyler Higbee would be sidelined over COVID-19 issues. Havenstein, running back Darrell Henderson and cornerback Donte Deayon also did not play after being placed on the reserve / COVID-19 list in the days leading up to the game.

Against the Cardinals, the Rams received significant contributions from less prominent players such as offensive lineman Joe Noteboom, backup tight ends Kendall Blanton and Brycen Hopkins, and the cornerback David Long, among others.

The players didn’t have much time to prepare. But McVay said this week that late warning can sometimes help players because when given too much time “they can be meticulous to the extreme.”

“It’s a very short period where you don’t have the opportunity to think too much about anything,” he said, “you just have to go play.”

Those players could be called up again against the Seahawks (5-8) as the Rams make an effort to overtake the Cardinals in the NFC West.

The Rams also have games pending in Minnesota and Baltimore before playing the final against the San Francisco 49ers.

With 25 Rams now on the COVID list, is Sunday’s game against the Seahawks in jeopardy?