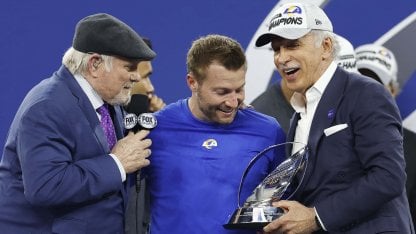 The 36-year-old Rams coach will be in his second Super Bowl and may pass Mike Tomlin as the youngest to win it.

Sean McVay, Los Angeles Rams head coach will be in his second Super Bowl. In the 2019 season he faced the Tom Brady’s Tampa Bay Buccaneers and fell defeated. He will now be before his former assistant Zack Taylorhead coach of Cincinnati Bengals.

Sean McVay began his coaching career as an assistant wide receiver with Jon Gruden as head coach for the Tampa Bay Buccaneers in 2008. A year later he would work as a wide receivers/quality control coach for the Florida Tuskers of the United Football League (UFL) under the orders of Jay Gruden as Head Coach.

For 2010 he is hired by the Washington Redskinswho had mike shanahan as a head coach, as an assistant tight end, a position in which he was promoted after one season. And he moved up one more rung, to offensive coordinator, when the franchise changed its head coach and hired Jay Gruden.

Sean McVay as head coach in the NFL

But the definitive leap was made in 2017 when the Los Angeles Rams called him up and gave him the head coaching job, a few days before his 31st birthday, and he became the youngest coach in NFL history.. In his first season he led the Rams to the playoffs but lost in the wild card round. The Pro Football Writers of America named him NFL Coach of the Year.

His best version came in the 2018 season, with a balance of 13-3 in the regular season. They then defeated the cowboys already the saints to get to superbowl. He became the youngest head coach to lead his team to the grand finals. But they fell 13-3 to the Tom Brady’s Tampa Bay Buccaneers.

The following year was disappointing. They finished with a 9-7 record and did not make the playoffs. The 2020 season saw an improvement and they finished the regular season with a record of 10-6. But they fell out of the race in the wild card round with the Green Bay Packers.

2021 arrived and the season was magnificent with the arrival of matthew stafford like QB. They finished the regular season with a record of 12-5 and ranked first in the NFC West. In the playoffs they beat the Arizona Cardinals, the Tampa Bay Buccaneers and were consecrated Conference champions against the San Francisco 49ers.

There was a mindset shift in the NFL with the disruptive appearance of Sean McVay and his thriving youth. He made me change the search paradigm for experienced but not very daring technicians. Four of his assistants were hired as Head Coaches in other teams: Matt LeFleur (Green Bay Packers), Zac Taylor (Cincinnati Bengals), Jedd Fisch (Arizona Wild Cats), Brandon Staley (Los Angeles Chargers); on the basis that new blood and refreshing ideas can have better results than “old school”.

Get the latest Super Bowl news and more!

Who is Sean McVay, the coach of the Los Angeles Rams and the youngest in the NFL?