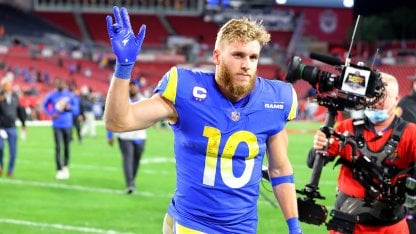 At just 28 years old, he was chosen as the best receiver in the NFL in the 2021/22 season. His beginnings, his draft and his record-setting season.

The 2021/22 NFL season is being dreamed for Cooper Kupp. And it is that not only will he play the Super Bowl with the Los Angeles Rams, but was also chosen as the best wide receiver. However, to get to this point he had to make sacrifices. Next who is Kupp, the star of the Rams.

Born in Yakima, Washington, Cooper had a whole life linked to sports. Before finding the sport that would take him to stardom he practiced basketball, until he started football and was praised by the coaches for him playing wide receiver. His level was so high that he finished his senior year with 60 receptions, 1,059 yards and 18 touchdowns.

In 2013 he entered the E.Washington University and signed to be Eagles new player. He quickly became the starting catcher and finished his first year with multiple rookie records. In turn, he received Freshman of the Year award and was the first freshman to make the All-American team since Randy Moss in 1996.

During his time at the university he continued to grow his incredible numbers and became the owner of different records. In his third stage as a student, there were rumors whether or not he would come back due to the nfl Draft 2016, but in November of the previous year it had already closed back. Totalfinished his student stage with a total of 428 receptions, 6,464 yards and 73 touchdown receptions, breaking the FCS all-time record in all three categories.

At Draft 2017, Kupp was the seventh receiver selected in the third round by the Los Angeles Rams, signing a four-year contract. He was named as the fourth in that position within the team, and made his debut with the Rams in the first game against Indianapolis where he made his first touchdown. During his first seven games, he became the first receiver in the “red-zone” and third down. At the end of that season, he was placed on the “All-Rookie Team” by the “Pro Football Writers.”

in 2018 promoted to first catcher of the team, and began the year with nine receptions for 162 yards and two touchdowns, including a 70-yard touchdown reception. However, not everything was joy since suffered an anterior cruciate ligament injury in his knee that caused him to miss the remainder of the competition. He made his big comeback in 2019, against Carolina.

During 2021, he had his best year in numbers. She took the triple crown for a wide receiver with most sacks and receiving yards during the regular season. At the same time, Los Angeles Rams got a record of 12 wins and 5 lossesin addition to win the NFC West Division title.

Get the latest NFL news and more!

Who is Cooper Kupp, the star receiver of the Los Angeles Rams