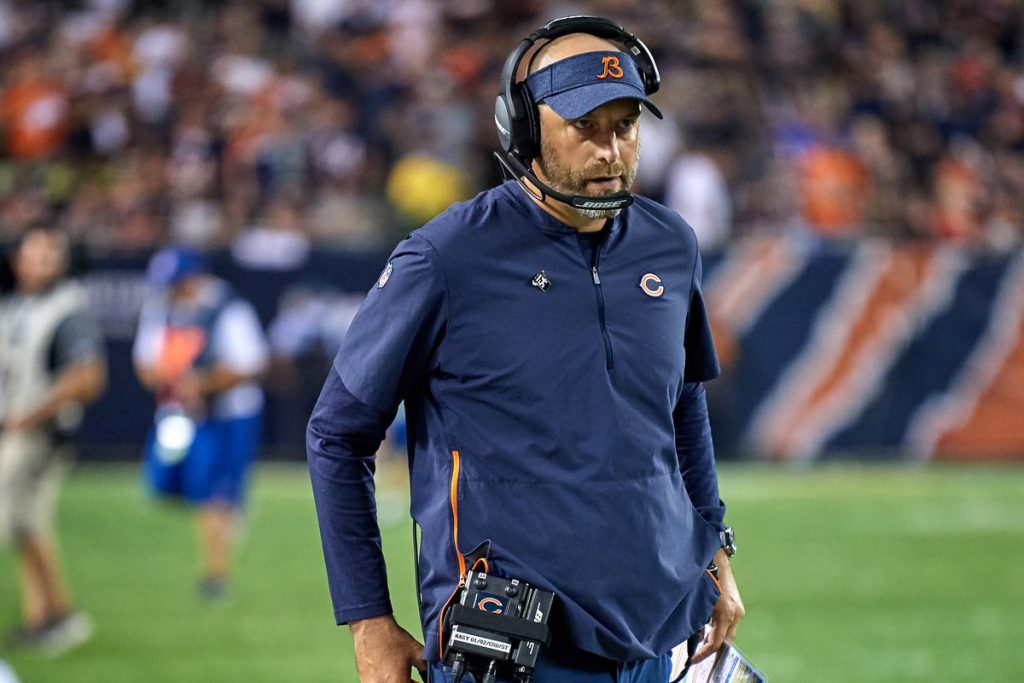 In the centuries-old history of the Chicago Bears, they have never fired a head coach before the end of the season, although it must be said that the fact that the team’s owner, George Stanley Halas, was the head coach in four years Different stages, it has helped that record a lot, no owner of an NFL team ever fires himself.

All of that could change this week if the Seattle Seahawks defeat the Bears, leaving them with 11 losses. In that scenario, perhaps next Monday, December 27, Matt Nagy will go down in history as the first head coach that the Bears fired in the middle of the season. And not only is his immediate dismissal justified, it is that there are very few who explain how he continues to occupy that position when he has given clear signs of his little expertise.

The rule change to search for NFL head coach

And i say that could be fired as soon as this monday for a change in the rules of the search for head coaches. The NFL decided that teams could begin the search for a head coach with two weeks remaining until the end of the regular season.. That milestone will take place next Monday, so teams like the Raiders and Jaguars can get started, which is a substantial advantage over other teams that have planned or may contemplate a head coach change.

To that fact, another factor is added: few times there are so few candidates as in 2021, which could cause many other teams to advance their decision so as not to be at a clear disadvantage.

Well, now that there is barely a week to go before the now traditional famous Black monday of layoffs among the staffs of the worst teams in the NFL, here we review other possible names as future former head coaches.

Few understood David Culley’s choice as head coach of the Houston Texans. Not only was he a complete stranger, he lacked the resume and experience for the position. In view of how the Texans season has evolved, the dismantling of the squad, together with the fact that Deshaun Watson neither dresses nor plays, everything indicates that Culley is only a man-jumper.

If the Texans do not want to be left behind, they should fire Culley, especially if one of the candidates desired by general manager Nick Caserio is Eric Bieniemy or Byron Leftwich, who, today, seem to be the ones who can attract the most attention.

We cannot doubt the motivational qualities of the Detroit Lions head coach, however we can doubt his qualities as a coach. In all of Dan Campbell’s journey he has shown very little on the wings, and that is where his work should be valued, not behind the microphones at press conferences.

As we already wrote at the time, the management of the QB position by Matt Rhule will go down in history as one of the most negligent ever seen. GM David Tepper cannot be at all satisfied with the work of his head coach, who has already fired his offensive coordinator Joe Brady. The sooner Tepper is aware of his failure to cast him, the sooner the Panthers can start looking for a replacement.

Perhaps not only will the season end, but it is even possible that it can continue, something that very few will understand. And I say I could continue because the Mara family does seem determined to fire GM Dave Gettleman and stay with the head coach, a decision that usually doesn’t work out.

The Giants are a franchise in this very similar to the Bears: the changes cost them, but they should take good note of what their neighbors, the Jets, did, who fired GM and kept the head coach, Adam Gase, exclusively to fire him. a year later for his lousy job.

Other candidates for former NFL head coaches in 2021

Others could join the previous names, although if they were fired, they would be on the traditional Black Monday. Head coaches like Mike Zimmer on the Minnesota Vikings, Kevin Stefanski on the Cleveland Browns, Brian Flores on the Miami Dolphins or Vic Fangio on the Denver Broncos still have their teams struggling to make the postseason, and there’s nothing more absurd than throwing them out. before they are eliminated and destabilize the squad.

A very different matter would be once the season is over and, seeing the results, or rather, the lack of them, a more drastic decision is made.

All of those we have mentioned for one reason or another have already made enough merits to justify dismissal, and others continue to accumulate them, and no one would be surprised if they ended up being it.

So who could be fired as is often the case every year? Personally, I have two candidates, both Super Bowl winners: Mike McCarthy on the Dallas Cowboys and Pete Carroll on the Seattle Seahawks.

It seems difficult for them to leave, but I wouldn’t be at all surprised if Jerry Jones fires McCarthy if he sees that he can lose his offensive coordinator Kellen Moore to another team, and is able to keep Dan Quinn as defensive coordinator. In Carroll’s case, there could be some fatigue in the Seahawks’ management. If we add to that the probable departure of Russell Wilson leaving the franchise and, then, a new era begins, perhaps Carroll is not the best qualified.

In any case, Christmas week is very interesting and different. The new regulations that allow the start of the selection process for a new head coach could precipitate many decisions. Let no one be surprised that this new Black monday go ahead, without of course leaving aside the traditional Black Monday for the rest. The NFL as always in the eye of the hurricane.

What’s your opinion about it? What are your candidates to leave before and during the next Black monday of the NFL? We read you in the comments under this column and on our social networks.