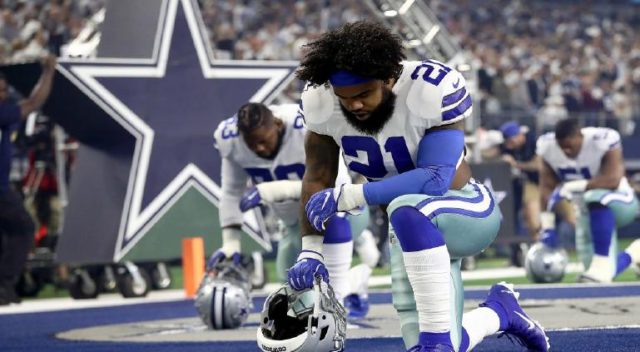 Much is being made of the Cowboys’ complicated situation with the salary cap for this year. The cowboy team is the third team in the NFL with the largest surplus over that cap, also having 21 players who will become free agents next month. This situation is due in part to the expensive contracts of several players, including running back Ezekiel Elliott.

It’s true that Dallas can improve its salary-cap situation by restructuring some of those contracts. Or, ultimately, freeing up some players who are saving from the cap. In fact, rumors suggest the team could release receiver Amari Cooper or defensive end DeMarcus Lawrence. Those moves would mean $16 million and $19 million, respectively, of space under the salary cap.

However, that is not an option with respect to Elliott. It is true that the broker’s performance has declined in the last two campaigns. Plus, his performance in 2021 and the way he hampered the Cowboys’ offensive performance seem like reason enough to let him go.

But for now, the Cowboys’ hands are tied.

If the Cowboys were to release Ezekiel Elliott this year, that would be $30 million in dead money this season. This goes well beyond the expense of just keeping the running back in Dallas, which will impact $18.2 against the salary cap. Therefore, financially speaking, Elliott’s continuity in 2022 is better for the cowboy team than getting rid of him.

Let’s remember that Zeke comes from having his third worst season as a professional in the NFL. In 2021, the running back recorded 237 carries for 1,002 yards and 10 touchdowns. Besides, Elliott was affected from week 4 by an injury of which no further details were known until after the elimination of Dallas in the playoffs.

In fact, it was just after the loss to the 49ers that it became known that Elliott had a partial tear of the posterior cruciate ligament in his knee. That injury could heal with rest, which Elliott didn’t have at any point this season. We do not know if this was by decision of the player, the coaching staff, or part of the leadership.

Analyzing the facts, this last factor seems the most likely. It’s curious that Elliott didn’t show up as limited in the injury reports from the final practices of the season. Add to that offensive coordinator Kellen Moore’s insistence that he keep giving him more weight on offense, even when Tony Pollard could offer better features and better performance.

However, Elliott was never seated. This is presumably due to his status as one of the highest earners on the team. And this is something that would not be surprising from the leadership of the Cowboys.

Mike McCarthy said that Ezekiel Elliott partially tore his PCL in Week 4 against the Panthers.

You can literally see the drop off happen throughout his season yet the Cowboys continued to give him more carries than Tony Pollard. pic.twitter.com/q7JCV4Ckki

Now, Elliott is clearly far from the level he displayed in his early years in the NFL. Although he was the #4 overall pick in the 2016 Draft and is among the highest-paid running backs in the league, Zeke’s current performance is not befitting a player of that status. In fact, Elliott’s performance is far from that of other running backs like Jonathan Taylor (Colts), Derrick Henry (Titans) or Nick Chubb (Browns).

What will happen to Ezekiel Elliott in 2022?

As we mentioned, the Cowboys can’t do without Elliott this year because of the impact he would have on the salary cap. Therefore, the continuity of the running back in Dallas is almost assured this year.

Now, what will be the position of the team in 2022? First of all, Zeke’s physical condition needs to be evaluated once he fully recovers from his injury. And, second, if he will continue to have the same offensive weight this year, this despite the fact that Tony Pollard can offer a better performance than him.

Logically, this should not be the case. The money spent on Elliott’s salary isn’t going to come back, and “forcing” his starting job just for it isn’t ideal if the Cowboys want to win titles. In 2021, Elliott was more of a liability than a benefactor. And this is something that can be repeated this year if the Cowboys do not change their mindset.

It’s clear the Cowboys will be tied to Elliott in 2022. However, the best course of action would be to give Zeke an offensive weight adjusted to his abilities. If the running back isn’t fit or isn’t the best option for certain plays, Tony Pollard should have more of a stake. In itself, you have to think more about what the players can contribute and their impact on the game than about the value of their salary in the team.

Now, if the cowboy team decides to do without Ezekiel Elliott in the medium term, the economic impact would be reduced.

According Over The Cap Facts, cutting the running back in 2023 would imply $11.8 million in dead money and $4.8 million in salary-cap savings, more friendly figures than those already mentioned for this year. Besides, as the years of Elliott’s contract go by, the amount of dead money will be less and the savings under the salary cap will be greater.

Ezekiel Elliott took a shot to his right ankle on this play pic.twitter.com/D5drLdZim6

So 2023 could be a year of changes at running back in Dallas. Aside from a potential departure for Elliott, fellow running back Tony Pollard could also be. Pollard’s rookie deal with Dallas expires that year, and it’s likely his extension could be expensive given how coveted he’ll be in free agency. However, he may not cost as much as Elliott.

Part of the future at running back in Dallas could be decided in this year’s Draft. If the Cowboys decide to draft a rookie at this position, it would show the team’s intentions going forward with Elliott and Pollard. However, this is a somewhat remote possibility. More so now, when Dallas has other needs to cover on its roster.

There’s no question the Cowboys will have to make some sacrifices this year because of the salary cap. However, Ezekiel Elliott will not be one of them. It remains to be seen if the running back offers an acceptable performance in the coming season and if the coaching staff manages it properly. Or, if it repeats what happened this year and Dallas’ running game is hurt again by Elliott’s decline.

What should the Cowboys do with Ezekiel Elliott in 2022?