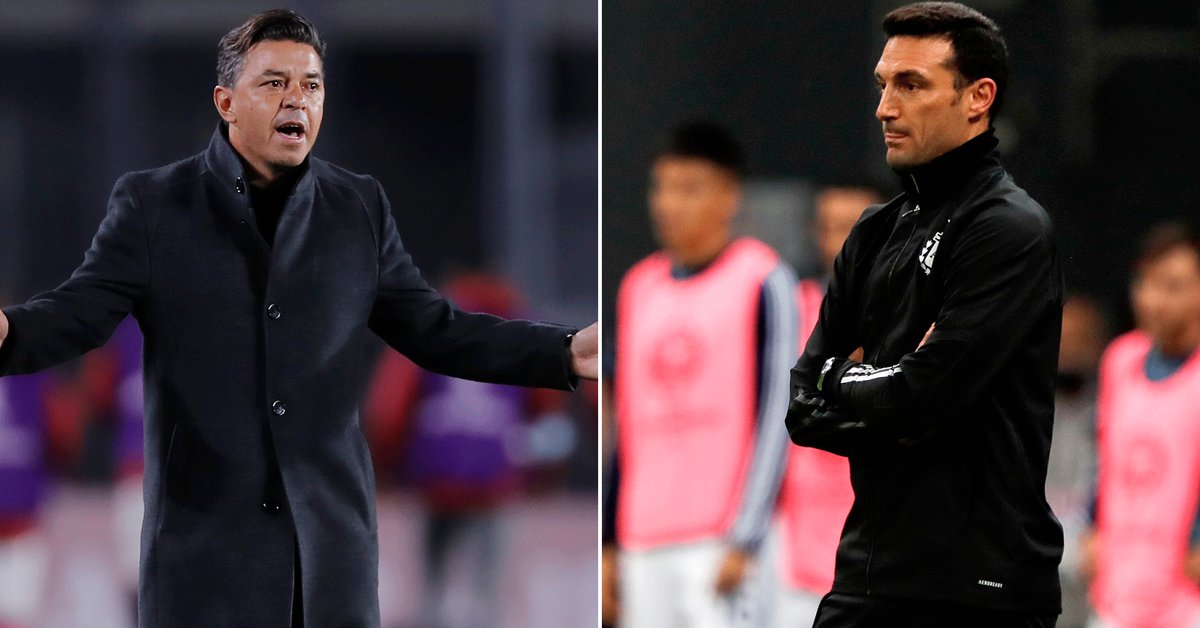 Scaloni, on Gallardo’s sayings of wanting to lead the National Team

Two days after his first title as technical director, Lionel scaloni He spoke about what it means to have achieved the Copa América with the Argentine national team and the added value of cutting a 28-year drought without major titles. In an interview with Radio La Red, the coach addressed various issues and responded to comments from Marcelo gallardo wanting to direct the national cast at some point.

On the subject, the DT from Santa Fe said: “I did not delve into the news, but the answer seems normal to me, not at all far-fetched. To the Cholo Simeone and others also asked it. I would have said the same in that position, how could I not like directing it. Then there are all the comments from outside that can distort things, but I am calm and convinced because I know how things are.

Regarding the title achieved, he asserted: “I could not promise that we would bring the Cup, we were going to leave everything. Always positive things come out of defeats. But we won, it was historic, but If we didn’t win, I wouldn’t have had to change anything for everything this Selection gave”. In addition, he underlined the work of Lionel messi for the delivery in the contest, beyond the talent that usually distinguishes the Argentine captain: “I rescue everything that Messi gave to the group. I have no words to thank, not only him but everyone”.

Scaloni made his debut as coach in this position and admitted that he was not bothered by the criticism he received for his lack of experience. “Obviously there will be debate and more in a country that is rich in football. Some would like a type of footballer, but I do what I feel and I think the team needs. What the technician has in mind is not always the right thing to do, we are flexible and I have no hesitation in admitting it.. When I was acting I played more directly, with other types of players, and in the end we saw that the best played differently ”.

“With criticism I have no problem, I will never get angry or fight with someone because they think differently which I believe because it is something normal and we know how this is. Neither when I was a player nor now as a coach will I react. The only thing it does is take away my energy and that has to be in place to prepare the team and make it work in the best way. I don’t watch programs, but today everything is known in five seconds. I do not internalize what they say or comment because it wears out. It is a criticism that one has to do for any reason, but in the end I think everyone is happy that Argentina came out champion ”, he added.

One of the strongest topics of debate was who was the right one to play as central midfielder, a position that was disputed Leandro Paredes Y Guido Rodriguez. “I’m not so convinced about the positional 5 issue. I believe that a team cannot raise it around 5, but other coaches can. We believe more in the whole. In fact, the team has played very well with Leandro Paredes and Guido Rodríguez and not so well with each one ”.

In this regard, he added that “it is not a question of a player, but who you surround him with. It is evident that Leandro has always been with us and has played almost every game since I was here (32 of 34), but it is also evident that if we do not see him in conditions, not just physical, he will play the one we think is good. They know it and they have assumed it, we decide for the good of the National Team ”.

Regarding the scorer of the final, Ángel di María, he asserted: “He’s a noble boy, a good kid. I have had a great relationship with Di María since before I was a coach. I was one of the first who told him that he had to continue being in the Argentine National Team”.

And about the figure of Argentina in the final, Rodrigo de PaulHe indicated: “Rodrigo wins the position himself, and he can also lose it. For us it is very important, but it is all his merit ”.

Players. “We have 28 warriors who played for the Argentines, that fills us with pride. Surrender and a sense of belonging are not negotiated “

The team. “It always has to have a balance and a way like we think. The important thing is that you don’t have to lower your guard ”.

Scalonetta. “I don’t know who believed that, but everyone was hooked. I am a square to follow the networks. It was a good idea, some identify it as a Ferrari and others as a Citroen. It is a Fiat Duna, quiet and sometimes we put a little gas in it. For now it is a Sdv 1.7 Diesel that I had ”.

Former champions and teammates. “They called me former players from 86 and 90 and some former colleagues from my time at the National Team. Normally people very close to football and who know a lot about the National Team, but giving encouragement ”.

Neymar gesture. “That speaks a little of what Neymar is. He is a great boy because of what his friends that we have in the National Team tell us to several. He also speaks a lot about what Messi represents as a world icon. Beyond the fact that they were teammates in Barcelona, ​​I think he went to greet him because he felt that Leo deserved to win something. She went looking for him because she needed to hug him and even he was going to feel better. “

People. “I would have liked to stop the bus in Ezeiza when we came, but at this time it was not viable.”

Europe-South America. “European football is different, but under no circumstances are we inferior.”

Scaloni and one of “his” players: Nahuel Molina (REUTERS / Diego Vara)

Renewal. “The idea was not to destroy what had been built, but to rearm. You need the players who have been, the good people and who push forward. In fact, some were left out and others I wish they could be. For example, Gabriel Mercado gave us a lot of time that he could and was left out of the Copa América 2019. I would not have wanted any of them to go down, but several made their own decision and made it public. I would have liked to have the possibility to make them change their minds ”.

Other players. “We are open to allowing more players to enter. We have a base that knows exactly what we want ”.

Archers. “With respect to the archers, the way was paved for us by Franco Armani’s COVID-19.”

Exclusions. “They are very difficult decisions to tell him that they will not be there, but the only way is by calling him, explaining and going straight ahead. It is very difficult for a team like Argentina to play everything, so you have to have understanding with the coach and his teammates ”.

Molina. “We had liked Nahuel Molina a lot and the only way he could be was for a side to fall, that’s why we made the decision.”

Sayings of Alfaro to Tite. “No, but if he said that it was because he believed it, I don’t think it’s wrong. The cameras were there, but it doesn’t seem bad at all. Besides, he has to feel it to say something strong like that ”.

Who is Antonia Farías, the only woman in the photo of Argentina, champion of the Copa América in Brazil
“Finally”: this is how Draw Martínez met his daughter nine days after her birth
The funny viral dialogue between Messi and Paredes that caused Neymar’s reaction on social networks