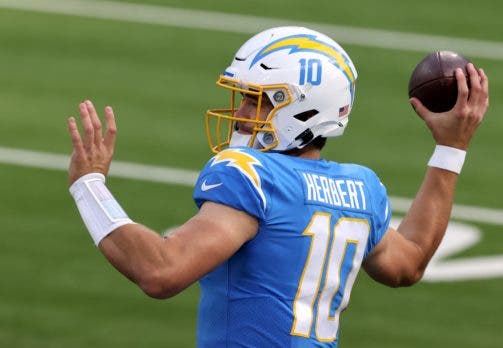 It may interest you: Serena Williams jokes about a possible return: “Brady started a very good trend”

The Chargers visit the Chiefs after a very tight duel with the Las Vegas Raiders. Pundits favor the Chiefs because of home advantage and the offensive explosion of Patrick Mahomes (5 touchdowns against the Arizona Cardinals).

But watch out for Chargers quarterback Justin Hebert, who has a career-high 1,130 yards, 10 touchdowns and 2 interceptions in 4 games against Kansas City.

An unpredictable game and a duel for the leader of the AFC West in the NFL is expected.

Washington Marshal, Carson Wentz He has 497 yards, 4 touchdowns and 1 interception in 2 games against the Lions.

Detroit will lose running back DeAndre Swift due to injury, who led the Lions attack. Coupled with 4 more players on the injured list, they call into question the chances of responding to the Commanders’ attack.

Washington’s rookie receiver Jahan Dotson caught 2 touchdowns and is expected to play a larger role in the Wentz-led offense.

The Saints suffer major injuries to their quarterback James Winston and his running back Alvin Kamara and Mark Ingram. None of the three is guaranteed to participate on Sunday.

Tom Brady, who has never beaten New Orleans in the regular season with Tampa Bay, will get a chance to end the streak against a battered Saints team.

Tampa Bay running back Leonard Fournette he had a phenomenal game against Dallas last Sunday and is expected to have more offensive responsibility this week.

The Jets had a disappointing debut against Baltimore, where the offense never got off the ground. Cleveland has a defensive line led by the superstar Myles Garrett and a number of perimeter players.

Cleveland tells the health and presence of its running back Nick Chubwho has decimated the Jets in the past.

His numbers against New York are: 96 yards and he has scored 2 touchdowns in 3 games.

The experts were surprised after the victory of the Giants over Tennessee. But there is little optimism that the defense can contain Carolina’s quarterback, Baker Mayfield.

The duel will be defined in which team will be able to stop the rival’s best weapon. Can New York neutralize Mayfield and his new receivers? Does Carolina have what it takes to stop Saquon Barkley?

The injuries of T. J. Watt Y Najee Harris They are very hard blows for the Steelers. Both defense and offense lose their best players.

Bill BelichickPatriots coach, hasn’t started a season with a 0-2 record since 2001.

The question for New England will be the health of its quarterback mac jones. If Jones can’t play, the matchup heavily favors Pittsburgh.

The Colts have had a tough 2-3 record against the Jaguars in the last 5 games. Indianapolis has its best results at home against Jacksonville.

The Jacksonville Marshal Trevor Lawrence he had a phenomenal game against the Colts last season in the NFL, but he will face an improved defense.

Jonathan Taylor will face the Jags’ talented but inexperienced defense.

The Ravens stifled the Jets’ offense and will host a Miami team trying to adjust to its new set pieces.

Miami has regular defense and the quarterback of the Ravens, Lamar Jackson He has 6 touchdowns against the Dolphins in 2 games.

Miami will need his exceptional performance from its best offensive pieces: Tyreek Hill and Jaylen Weedle.

Atlanta blew a 16-point lead against the Saints last Sunday. Now they will have to face a superior team to the previous one: The Rams.

Los Angeles will want a bigger comeback after losing in their debut.

The quarterback of the Rams, Matt Staford he will be facing a defender suffering from injuries at important positions.

Two 0-1 teams meet in Las Vegas this week as the Cardinals take on their second straight AFC West opponent in the NFL.

Raiders catcher Dave Adams he seems to be dominating Arizona offensively for years and should get away with it against a defense that gave up the most passing yards of any team in Week 1.

It seems that Cooper Rush will start for the Cowboys instead of quarterback Dak Prescott.

The lack of pass weapons and pass protection led to a terrible game for the Cowboys with Prescott, so that’s unlikely to change anytime soon.

The Bengals are looking to cut down on errors to get on track for their first win.

Poor decision making cost the Broncos a win Monday night, but their defense was fine.

Denver quarterback, Russell Wilson he plays very well against young teams and the Texans are forecast to suffer from the passing game.

Seattle surprised the Broncos on Sunday and are looking for the same against the 49ers. Marshal of San Francisco Trey Lance he has to improve his passing game if he wants to keep the job.

San Francisco coach, Kyle Shanahan, emphasized the need to use a running offense. And Seattle doesn’t have a defensive line to stop a group of running backs at the 49ers’ level.

The weather helped the Bears defeat the 49ers on Sunday, while the Packers’ offense struggled in its first game without Adams. Aaron Rodgers you’ll want to put on a primetime show

Rodgers is 22-5 against Chicago.

the Bills they seemed unstoppable last week while living up to their Super Bowl hype. But the Titans have a habit of playing against their opponent and beat the Bills last season en route to the No. 1 seed in the AFC in the NFL.

The Bills are favored with a healthier roster.

Minnesota has a chance to show off its defense in prime time. This is a unit that hopes to have turned an ugly 2021 NFL season around and be a strength, not a nuisance.

Allowing just seven points to the 2021 NFL MVP was the fewest points by a team led by Aaron Rodgers.