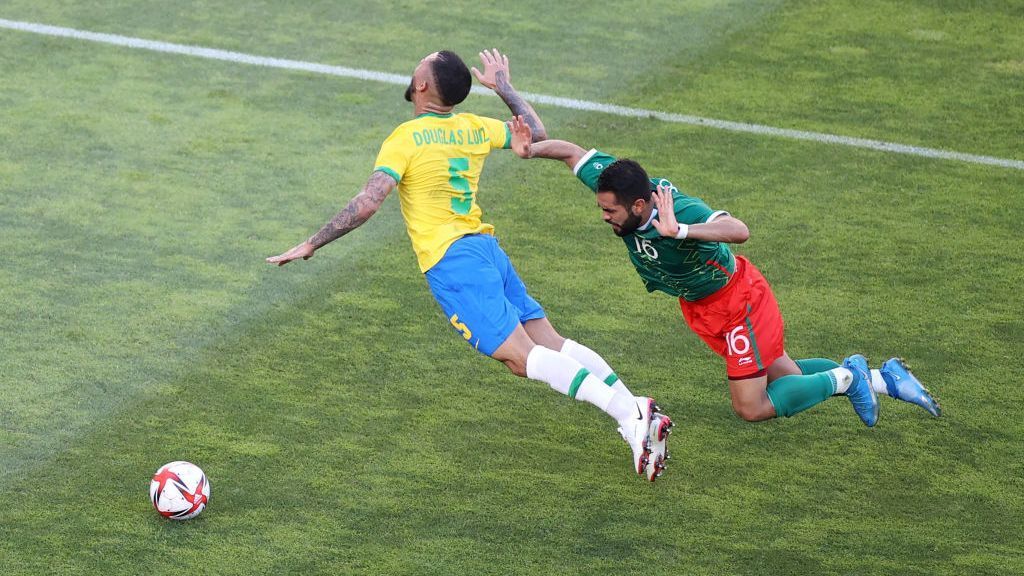 Douglas Luiz went to the ground when looking for the penalty when he felt the contact with Joaquín Esquivel, but the play was reviewed and it was determined that there was no penalty against Mexico

The arbitration analyst of ESPN Felipe Ramos Rizo described as shameful that the penalty of the Mexican midfielder Joaquín Esquivel, on the Brazilian midfielder, Douglas Luiz, will be sanctioned.

“Shame on the penalty in favor of Brazil, that is not a penalty”, Expressed the former referee on his Twitter account.

During the 29th minute in a play in the area of ​​the Mexican team, the Aston Villa midfielder gained possession of the ball and stopped to hit the Mexican midfielder, so Douglas Luiz fell inside the area, which is why the referee central scored the maximum penalty for the South American team.

After marking the penalty, the referee began to listen to the VAR assistants, to confirm the penalty or change the determination, so that, in the face of the claims of the Mexican elements and the celebrations of the Brazilian players, the central referee remained constantly communication are your assistants.

After a few seconds where it was not resolved if there was a penalty or not for Brazil, the central referee decided to attend the VAR to analyze the play and consider whether to maintain his signal or change his decision. After a few seconds in front of the monitor, he pointed out that there was no penalty for the Rio de Janeiro national team, reversing his decision.

Before the signal, the Brazilian players changed the celebration for claims, while the Mexican elements asked for a yellow card for Douglas Luiz, after they considered that, in the absence of a penalty, the Brazilian midfielder had to receive a yellow card.

Similarly, the analyst of ESPN He described the participation of referee Bul Kavakov as bad: “Bul Kavakov, the Bulgarian referee, how bad he is, kicks, badly sanctioned penalty and no idea of ​​driving”, he concluded.