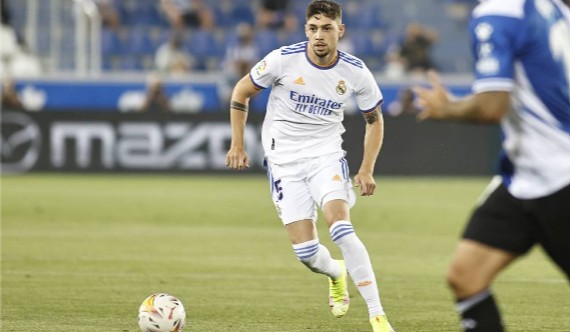 It may not be a big surprise, but in few forecasts Fede Valverde appeared as a starter in Vitoria. The shots were aimed at Isco, most used in preseason rehearsals. Well no. Ancelotti He completed the midfield with the Uruguayan, and in general things went well.

In particular it wasn’t bad either. Federico was not as participatory as Modric or Casemiro during an hour of match. Work, security pass and some sporadic appearance in the circulation. Correct. Until that minute 62 when he started from his field, he drove short and deployed all his power in the 0-3 prologue. A dazzling flash, the last but not the first from a footballer who has always shown that he has legs, but has never had continuity.

Valverde made his debut as a starter in the Whites’ first squad on December 6, 2018, against Melilla in the Copa. A little less than four seasons. And the overall numbers are not bad, with the occasional long-term injury: 103 games, although only half as a starter (62), for 5,887 minutes of play. Author of five goals and six assists. Well. The striking thing is the lack of regularity in the alignments. Or trusted by the coach, call it what you want. The best streak of ownership is located in six matches, last season, between October 21 (Shakhtar) and November 8 (Mestalla). In between, the Clsico del Camp Nou where he opened the victory of the white team with a very his own start. To that ‘record’ figure add a streak of five consecutive incumbents (between January 29 and February 16, 2020, just before the pandemic) and two out of four (one after the break, between June 18 and 28, and the last four duels of the last campaign). Those are the occasions – counted – in which he has been able to feel important in the Real Madrid eleven. To all this we must deduct a couple of factors that qualify the figures: the competition with three legends club lives that, in addition, have offered high performance in the last two years, andthe tendency to injureIt is true, as is his commitment. The swollen ankle he played with at Anfield, putting himself at risk, needs no further argument.

Coach Maor Rozen says that Valverde’s position is not that of the interior, but that of a pure midfielder with arrival. In the band or in the center, the Uruguayan has long been crying out for ten games as a starter, a serious and empirical proof of what many suspect: that He has the legs and the football to be importantat Real Madrid.