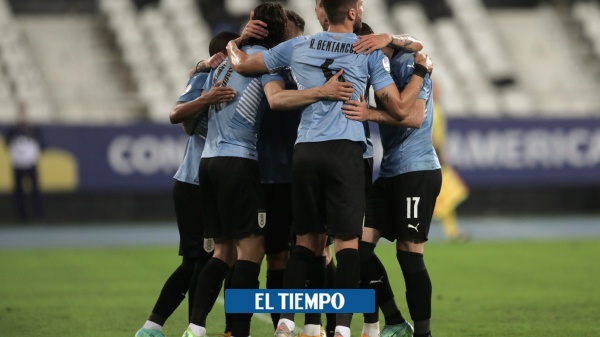 The defender Diego Godin focuses the concerns of the coaching staff of the Uruguayan soccer team with a view to the quarterfinal match of the America Cup with that of Colombia this saturday at the stadium Mané Garrincha from Brasilia.

The player of the Cagliariy captain of the Celeste is still “under medical observation”, after the discomfort in the twin that arose during the match against Paraguay, informed Efe a source of the Uruguayan Football Association (AUF).

You may be interested in: (Spanish referee for the Uruguay vs. Colombia in the Copa América)

In the last match of group A, played on Monday in Rio de Janeiro, Godín was a starter in the first half and was substituted at half-time. And he was seen during the second half sitting on the bench applying ice to his leg.

For this reason, the defender did a specific job this Wednesday, separated from the rest of his teammates, in the Training Center of the Brasiliense club, with a view to the quarter-final match against Colombia.

The players attended a technical talk on the field of play, after which they exercised under the orders of the physical trainer José Herrera.

At the end of the session, according to the AUF, the Uruguayans played soccer, tennis and soccer in confined spaces. The men he runs Oscar Washington Tabárez They will train again this Thursday at the facilities of the Brasiliense club, in the Brazilian capital.

La Celeste arrives at the meeting with the motivation of having played its best match in the competition against Paraguay, although with concern about the lack of a goal. Therefore, it is a fact that Luis Suarez will return to ownership to accompany Edinson cavani in the front.

The footballer of Atlético de Madrid could replace Giorgian de Arrascaeta or Nicolas de la Cruz. Uruguay finished second in group A, with 7 points, three behind Argentina, the undefeated leader of the team.

Those of Tabárez won two games (Bolivia Y Paraguay), tied before chili and they lost with the Albiceleste.

In case of obtaining a victory against the coffee team, Uruguay will face the winner of the game between Argentina Y Ecuador, which will also take place on Saturday in the city of Goiania.

You may be interested in: (An explosive cocktail drives away the goals of the Copa América)