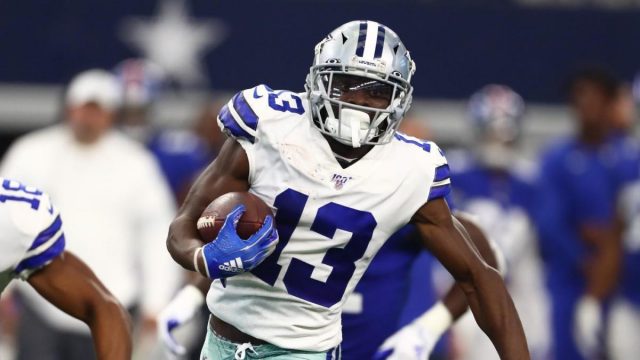 One of the open fronts that the Cowboys have right now is the continuity of wide receiver Michael Gallup. After an injury-plagued final year of a rookie contract, the Cowboy team was at a crossroads with the Colorado State product. And more so now that Gallup is recovering from an operation on the anterior cruciate ligament.

However, it became known at the end of last week that the cowboy leadership would be talking with Gallup to agree on its extension. And according to the latest reports, the negotiations are on the right track.

This was reported Monday by Mike Garafolo, a reporter for the NFL Network. According to the report, the Cowboys are confident that Gallup can be recovered before the start of the 2022 season. And, for this reason, the cowboy team is close to closing a new contract with the young receiver. According to Garafolo, it is estimated that Gallup’s new contract will be long-term, and that the player’s salary would be above $10 million a year.

From NFL Now on @nflnetwork: The #Cowboys are confident in WR Michael Gallup’s medicals after his torn ACL and that’s why they’re working to close out a long-term deal that would pay Gallup over $10 million per season. pic.twitter.com/TrpDl3ZOhR

Michael Gallup, like 20 other Dallas players, will become a free agent next week. However, his continuity was a dilemma for the cowboy team since before the 2021 season. In fact, the Cowboys were planned for a scenario in 2022 where they would have to choose between extending Gallup or keeping Amari Cooper on the team.

However, the front office did not count on both receivers not performing well in 2021. Cooper had one of his worst seasons in the NFL in terms of records, while injuries limited Gallup to just nine games last year. Added to this, Dallas faces a complicated situation regarding the salary cap, and this would force him to let go of players like Amari Cooper or DeMarcus Lawrence.

In fact, different reports at the end of last week indicated that the Cowboys would be willing to release or trade Cooper. This would happen no later than before the fifth day of the new league year, that is, next March 20. On that date, Cooper’s salary for 2022 would be guaranteed, taking a $22 million impact on Dallas’ salary cap.

Along with these reports, as we pointed out before, it was also possible to learn about the negotiations between the Cowboys and Michael Gallup for a new contract. Logically, the main limitation was whether or not Gallup could be recovered by the start of the new campaign. And with what was reported this Monday, it seems that the cowboy team is confident that Gallup can be 100% at the end of August.

Recall that Gallup suffered a torn anterior cruciate ligament in his left knee on January 2, this during a touchdown catch against the Cardinals. However, Gallup did not undergo surgery until five weeks after the injury occurred. This, apparently, while waiting for the swelling to reduce before operating, which would help a faster recovery.

Apart from this, reports indicate that Gallup presented a “clean” rupture of the aforementioned ligament. For these reasons, it is expected that the receiver can be ready before September. And if he remains in Dallas, his rehabilitation will be monitored by Britt Brown, who has done a good job with other Cowboys players in recent times. All this seems to give confidence to the leadership to extend its relationship with Gallup.

Dallas would also be working on the extension of Cedric Wilson

On the other hand, Mike Garafolo also reported on Monday that the Cowboys would be working on the extension of receiver Cedric Wilson. Like Gallup, Wilson will become a free agent next week. However, if Dallas decides to part with Amari Cooper, it means that it can afford Wilson’s extension along with Gallup’s. And keeping both of them would cost less than Cooper’s annual salary.

However, Wilson’s extension might not be as cheap as the Cowboys hope. Boise State’s product comes from having his best year in the NFL in 2021, registering 45 receptions for 602 yards and six touchdowns. Besides, Wilson not only stood out for being a valuable backup receiver, but also for having an arm that was ideal for trick plays on offense.

Based off this throw Cedric Wilson could absolutely play quarterback 🎯

Because of this, Wilson’s market value is estimated to be between $6 million and $8 million a year. By parting with Cooper, the Cowboys would be able to afford to keep Wilson. However, journalists like ESPN’s Todd Archer They do not rule out that the receiver could end up signing a more expensive contract with another team.

For now, it remains to be seen what finally happens not only with the extensions of Michael Gallup and Cedric Wilson, but also with the future of Amari Cooper. These are just a few of the many pieces the cowboy team must fit into their puzzle for the upcoming season. And with the team’s tight salary-cap situation, he may have to let go of some key players, including Cooper.

Update on Michael Gallup’s extension with Dallas: How much