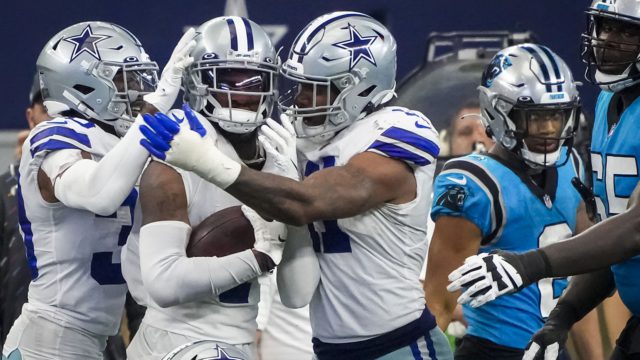 The 2021 season ended pretty early for the Cowboys, but there’s still a chance to see some of their players in action. This Sunday the 2022 Pro Bowl will take place, the traditional “All-Star Game” where several of the most outstanding of the 2021 season will meet. And, in this edition, Dallas is well represented.

Let us remember that four cowboy players will be present in Las Vegas: Trevon Diggs, Micah Parsons, Bryan Anger and CeeDee Lamb, the latter invited as an alternative. All of them will play their first Pro Bowl this year. It’s worth noting that offensive linemen Zack Martin and Tyron Smith were also selected, but declined to participate. Likewise, Dak Prescott was invited as an alternative, also declining.

Now, the duel between the best of the American and National Conferences is not the only attraction. This Wednesday the Pro Bowl Skills Showdown took place, a duel where the players participating in the event put their skills to the test. And in this event, televised on a delayed basis this Thursday, two Cowboys players stood out.

One of them was linebacker Micah Parsons. Dallas’ first-round pick in 2021 won the fastest man race. In it, he competed alongside teammate Trevon Diggs, running back Nick Chubb (Browns) and catcher Tyreek Hill (Chiefs). It is worth mentioning that Hill, who stands out as the fastest player in the NFL, did not put all his effort into this race. However, the other three did, with Parsons outperforming the rest.

The other cowboy player to impress at the Pro Bowl Skills Showdown was Trevon Diggs. Although he plays cornerback, Diggs entered the Best Catch contest alongside three of the best receivers in the league: his brother Stefon Diggs (Bills), Tyreek Hill (Chiefs) and Justin Jefferson (Vikings). And the #7 from Dallas won the contest.

In his first opportunity, Trevon impressed the judges with a one-handed catch between the legs. Then, in his second at-bat, the cornerback sealed his win by catching a pass from Russell Wilson mid-flip. Without a doubt, these were clear indications of Diggs’ abilities on the ball, thanks to his past experience playing as a wide receiver.

.@TrevonDiggs goes between the legs!

This wasn’t the only Pro Bowl Skills Showdown test the Cowboys’ defensive back participated in. Diggs participated with Darius Slay (Eagles) defending the passes of quarterback Mac Jones (Patriots) in the test of “Thread the needle” (or Thread the needle). This consisted of the participating quarterbacks completing passes to targets of different sizes and positions, guarded by two cornerbacks from the rival conference.

In this test Jones, who plays for the AFC, defeated his NFC counterpart Kirk Cousins. In fact, this was the AFC’s only victory in the Pro Bowl Skills Showdown. Of the five competitions, four were won by NFC players. And, as we saw, two of them were won by Cowboys players.

It is true that the Pro Bowl is not exactly an attractive game in terms of the level of play and competition. Nor will it add to the statistics of the players, beyond their selection for this match. However, it is still a good opportunity for the chosen players to interact with each other and spend some pleasant days.

That’s why Micah Parsons, Trevon Diggs, Bryan Anger and CeeDee Lamb jumped at the chance to participate in the 2022 Pro Bowl. Being their first time, they all wanted to experience it. Meanwhile, veterans like Tyron Smith, Zack Martin and Dak Prescott preferred to decline and have time to rest, already thinking about the next NFL season.

As we mentioned, this year’s Pro Bowl is the last time this season we’ll see several of the NFL’s stars whose teams didn’t make the Super Bowl in action. And, despite the declines, the Cowboys will be well represented in this exhibition game. Of course, defending the colors of the National Conference.