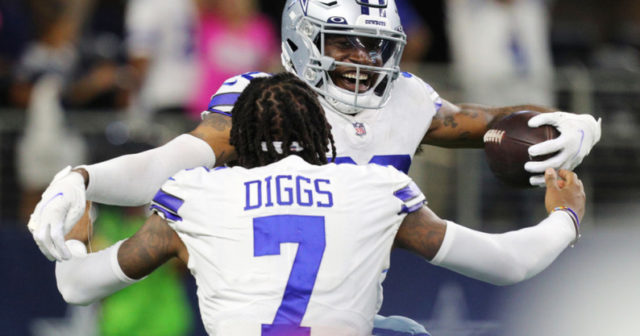 Last week was definitely a great week for Trevon Diggs. The young cornerback managed to be named for the first time for the Pro Bowl, being designated as a starter. And that was not all. Last Sunday night against Washington, the cornerback posted his 11th interception of the season. And this leaves him on his way to break several records.

The first, of course, is the cowboy team’s record for interceptions. Diggs already tied 11 interceptions in 1981 by Everson Walls, who was present at AT&T Stadium, on Sunday. With one more, # 7 will be the historic leader of the Cowboys in this section. He would even be the player with the most interceptions in the NFL since Walls did. But that is not all.

With two games left in the regular season, Diggs is close to the all-time leaders in the NFL. The next to equal (or overcome) would be Lester Hayes, who holds the best record since the merger of the AFL and the NFL (in 1970) after achieving 13 interceptions in 1980. After that would be the best record of all time, in power Dick “Night Train” Lane with 14 interceptions in 1952.

⭐️ T-most in @DallasCowboys history
⭐️ Most by any player since 1981
⭐️ 3 short of tying the NFL all-time record pic.twitter.com/JSdZQ0XT94

Records aside, one thing that seems certain is that Trevon Diggs will end up as the NFL’s leader in interceptions in the 2021 season. His closest pursuer in this section is JC Jackson (Patriots) with 7 in total. However, with two weeks to go, it seems difficult for the New England cornerback to catch up.

Another statistic where Diggs and Jackson have a very close duel is in the number of passes defended. Both cornerbacks are co-leaders in the NFL with 21 passes defended each, closely followed by Marshon Lattimore (Saints) with 19. In this way, Diggs could close the season leading the league in two sections.

As Trevon Diggs remains focused on his work, it remains to be seen if he will be able to break the aforementioned records. And this, in large part, will depend on the rival quarterbacks continue to “test” the Dallas cornerback.

There was much talk weeks ago that opposing quarterbacks would stop throwing into Diggs’s zone. This, of course, after the defensive back had seven interceptions in the first six games of the season. Now, it was surprising (and curious) how Diggs’ 11th interception occurred this year: after a deep pass from Taylor Heinicke into the area covered by Trevon on his first pitch of the game.

“I didn’t expect it, but in the end I’m ready anyway.”Diggs said at the news conference after the game against Washington. “They wanted to test me on the first play”.

Diggs wasn’t the only one surprised after the quarterback’s “terrible mistake” (as Ron Rivera would put it). For safety Jayron Kearse it was “mind-blowing” that of all players, Heinicke tested Trevon Diggs on his first pitch. Even Dak Prescott himself was also perplexed about it.

“Why would you try it on the first play?”Prescott said of Heinicke’s pass intercepted by Diggs. “It seemed like (Diggs) was the receiver. Honestly, that sets the tone and the mindset. I hope they keep doing that. (Diggs) is a great player. Congratulations to him for tying the team record, I hope he breaks it “.

When Dak Prescott saw WFT test Cowboys CB Trevon Diggs deep on first ball, Dak thought: “Why? Why would you try him on the first play?”

“It looked like he was the receiver,” Dak said of Trevon’s 11th INT. “Honestly, it sets the tone… the mentality.”pic.twitter.com/rPrgOi7Hqm

If there are no last minute changes, the next quarterbacks to try to “test” Trevon Diggs will be Kyler Murray (Cardinals) and Jalen Hurts (Eagles). Either way, the cornerback will be more than ready to do his job. It remains to be seen whether Diggs can finally break the Everson Walls mark, or equal the NFL’s all-time records in the games that remain.