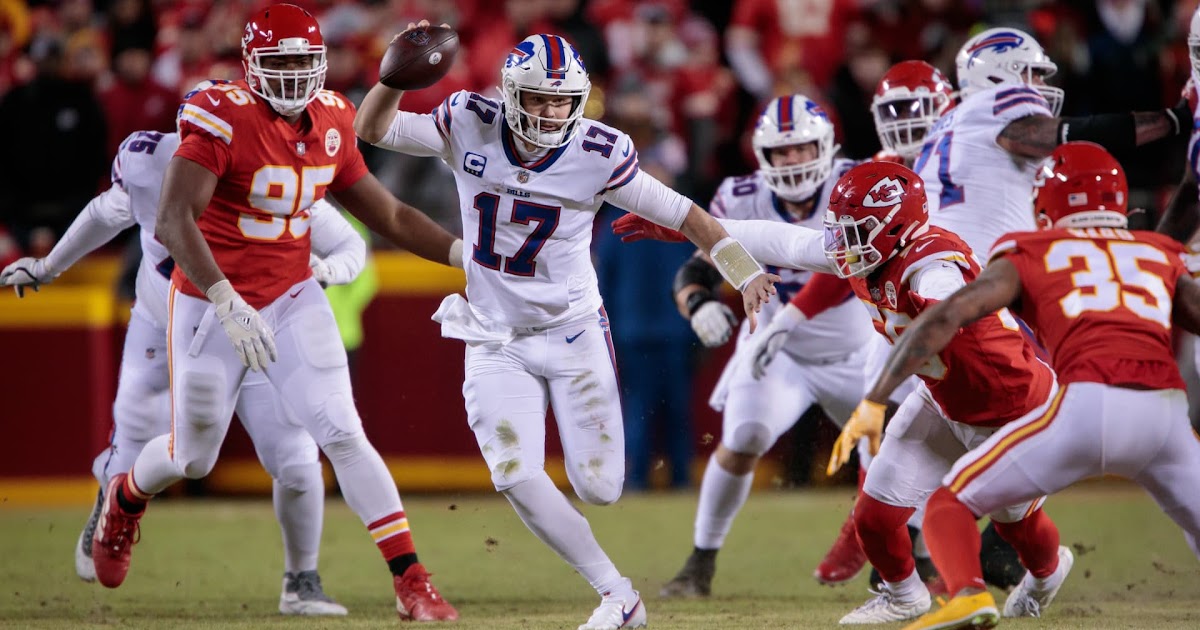 Buffalo Bills quarterback Josh Allen (17) runs the ball during the AFC Divisional Round playoff game against the Kansas City Chiefs on January 23, 2022 at Arrowhead Stadium in Kansas City, Missouri .

NFL owners are preparing for another round of debates over the league’s overtime rules, which have come under new scrutiny after one of the most exciting playoff games in history. There could also be something in the works.

“I think there’s a lot of momentum to have a change,” Atlanta Falcons president and CEO Rich McKay said Friday when discussing the overtime rule.

The NFL will hold its annual meetings in Palm Beach, Florida, from this weekend through Wednesday. The meeting brings together owners, team presidents, coaches and league staff in one place to discuss the operations and business of the game.

NFL commissioner Roger Goodell will be full of inquiries about deals with the league’s media. And there could be minor renewals regarding assets including radio and ticketing rights. Owners of NFL teams will also discuss modifying Rule 16, known as the overtime rule.

The rule allows each team to possess the ball in the extra game unless the kickoff club scores a touchdown. If the initial drive results in a field goal, the opposing team has a chance to tie the score or touchdown to win. And if there is a turnover, the first team to score wins.

The overtime discussions come more than two months after the 2021 NFL playoffs, in which six of the past seven games have been decided by three points or fewer.

The Kansas City Chiefs’ 42-36 victory against the Buffalo Bills in January 2022 came in overtime. The Chiefs scored the opening touchdown and eliminated the Bills from the postseason after a thrilling comeback. Critics of the overtime rule said the Bills should have had a chance to match the Chiefs’ touchdown, resulting in further push to change the rule.

The NFL last changed the overtime rule at its March 2010 meetings in Orlando, when it changed to the current format for playoff games. During the annual meetings in March 2012, the owners approved expanding the format to the regular season.

This year, owners will debate the Indianapolis Colts and Philadelphia Eagles proposal that calls for possessions for both teams in overtime, regardless of whether a touchdown is scored on the first possession. The clubs cite “competitive fairness” as a reason for the change.

Under the Titans’ proposal, the team that scores a touchdown on the opening drive would also need a two-point conversion to win.

In a call with reporters Friday to discuss the proposals, McKay, chairman of the NFL Competition Committee, said “data and analysis” support a change to Rule 16. He noted there have been 12 postseason overtimes since that the current rule was implemented. , adding that the winning team of the coin toss has won 10 times. Seven of those wins came in the first series, including the Chiefs’ win.

“That’s why there’s a discussion about changing the rules,” McKay said.

To amend the overtime rule, 24 of the 32 owners must vote in favor of a proposal, a task McKay admitted could be difficult. The proposed rule change by the Colts and Eagles could have an impact on competitiveness. Allowing both teams automatic possession could prolong games and increase the risk of injury.

The current overtime rule already allows both teams a chance at a possession, should the defense stop the offense on the first possession.

Team owners will hear from the coaching subcommittee during discussions.

McKay said voting to change the rule would be “a pretty big hill to climb the first time.” However, if the league changes Rule 16, McKay hinted that the Titans’ proposal would make more sense.

“If you feel like your defense is tired, you’ve scored, they’ve already scored, you have a chance to win the game at that point by going for two, which I think the analytics department thinks a lot of people would do,” McKay said. .

“That’s the discussion we’re going to have when we get to Palm Beach,” McKay added.

Other matters to settle

On the NFL business front, team owners are unlikely to decide on the significant media assets currently on the market, including the Sunday Ticket package. On March 16, CNBC reported that a decision on the $2.5 billion media package would likely be made during the 2022 season.

Also, expect more rumors about potential investment partners for the NFL’s media arm. The entity operates the NFL Network, NFL RedZone, NFL.com and the international property of the NFL. It is not clear what it could generate.

Instead, smaller deals that could be finalized at the meetings include NFL satellite radio rights with SiriusXM, owned by Liberty Media, and network radio rights with Cumulus Media’s Westwood One. It’s unclear how much the deals are worth, but as a point of reference, Westwood’s 2009 NFL renewal paid the NFL more than $30 million annually.

The NFL’s deal with Ticketmaster is also on the table, industry sources told CNBC. The league renewed this agreement in 2017, granting Ticketmaster the rights to the league’s ticket resale market. Sports Business Journal also reported that a renewal is likely.

Westwood One and Ticketmaster did not immediately respond to a request from CNBC for comment about their associations with the NFL.

The NFL also wants to finalize deals before the 2022 season around its rights to the Super Bowl Halftime Show, which Pepsi licenses. In October 2021, CNBC reported that the NFL is seeking between $25 million and $50 million annually for that asset. The NFL’s wine and champagne rights are on the market.

NFL club presidents will also get more perspective on a new team asset. On Tuesday, the NFL allowed teams to seek blockchain sponsorships with platforms like Coinbase and FTX.