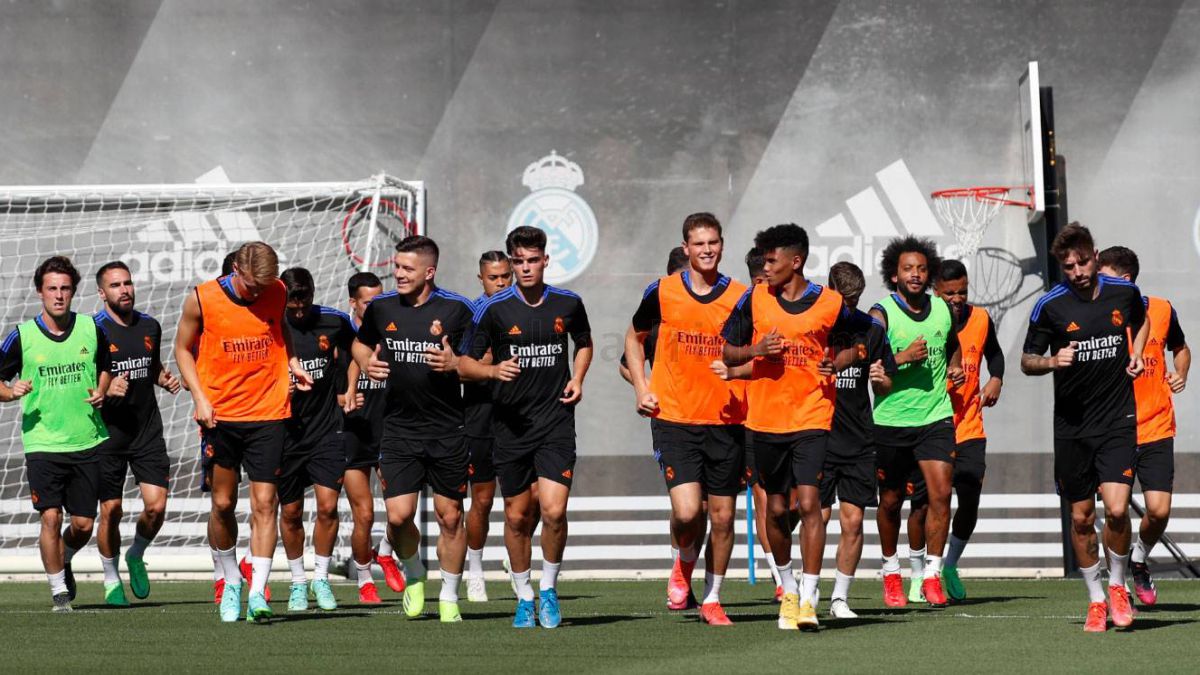 The Real Madrid season began this Monday and, as usual (except for the extraordinary nature of last season) several homegrown players complete Carlo Ancelotti’s working group while the Madrid internationals who participate in the Eurocup, the America’s Cup and the Olympic Games are rejoining the white discipline. The Italian coach has called up nine homegrown players who made their debut for Castilla last season (some of whom enjoyed minutes with the first team under Zidane) and a member of Juvenil A, David González from Burgos.

(Montalbán de Córdoba, 20 years old). The midfielder comes as something more than a meritorious. Ancelotti has been delighted with the reports he has received from the Cordoba and if nothing goes wrong, he will stay in the first team as a replacement for Casemiro. He already played that role last season in his debut as a starter with the first team in Cádiz.. He played four games under Zidane. It is his ninth season at Real Madrid, which he joined in 2013 from Seneca. He is the European Under-19 champion and one of the internationals who made his senior debut in the friendly against Lithuania in June.

(Berga, Barcelona, ​​20 years old). Last season he alternated with Luis López in the goal of Castilla de Raúl. In his season in the subsidiary he played 16 games. It is also his ninth season at Real Madrid, which signed him from Gimnástica de Manresa.

(Barcelona, ​​20 years old). The only one of the youth squad who has been under the command of Ancelotti who was not part of the squad that won the Youth League last summer. Last season he played 20 of Castilla’s 25 games, including the playoff round against Ibiza. A match in which he stood out. Although he has not yet debuted with the first team, First and Premier clubs have knocked on his door. In January he rejected an offer from Sassuolo to play in Serie A. For now, he is staying to do the preseason with the Italian.. It is his fourth season at Real Madrid. The defender joined in 2018 from Espanyol. He has yet to make his debut with the first team.

(Valencia, 21 years old). The center-back made his first team debut last season in the cup clash against Alcoyano and played another two league games, the second, against Getafe, as a starter. He is in his tenth season at Real Madrid. He arrived at the white club in 2012 from Valencia, who discharged him when he was active in his quarry. Chust is triple champion of Europe: from the Youth League and with the Spanish U19 and U17 teams. With the latter he was also runner-up in the world of the category.

(Madrid, 19 years old). The surprise of the final stretch of last season. Before Mendy’s injury, he ended up snatching the title on the left side from Marcelo. He added six games with the first team and gave an exquisite assistance to Modric in Granada. He had made his first-team debut in the Audi Cup against Fenerbahçe in the summer of 2019. In addition to his defensive qualities has great potential in attack, which is why Raúl has also used him as a winger and winger. Despite his youth, he is a ‘veteran’ of Valdebebas. This is his eleventh season at Real Madrid, which he reached at young age. He is also the European Under-19 Champion. A highly valued piece in the market if in the end it comes out due to the competition with Marcelo and Mendy.

(León, 20 years old). The most ‘new’ (in terms of stage at Real Madrid) of the youth squad that are under Ancelotti’s orders. Central midfielder compared to Busquets, arrived in January 2020 from the Villarreal quarry. It is his third season at Real Madrid. Last season he played 15 games with Castilla de Raúl.

(Madrid, 19 years old). Left-handed playmaker, creative and with great technical qualities. He was another of the regulars last season in Zidane’s calls, which gave him minutes in a dozen games, including two from Champions. One of the key pieces in the Youth that conquered the Youth League and last season in Castilla de Raúl. It is his tenth season at Real Madrid.

(Palma de Mallorca, 21 years old). Right winger with great speed. An untimely injury prevented him from increasing the count of four games he played with the first team, in which Zidane also placed him as a laner, a position for him that Raúl invented. With a Nigerian father and a South Korean mother, in the U-19 he has opted for Spain. Sixth season at Real Madrid.

(Madrid, 20 years old). Center forward with great power by high thanks to his meter and 91 centimeters in height. Raúl made him a regular in Castilla squad two seasons ago, still at a youth age, and last season he scored 5 goals in 16 games. It is also his sixth season at Real Madrid, which he joined from Unión Adarve. He is an under-19 and under-20 international with Spain.

(Burgos, 19 years old) The youngest of the canteranos that Ancelotti has called up. Last season he was still active in Juvenil A, but Raúl gave him the alternative with Castilla in the visit to Extremadura in the second phase of the competition. He is an offensive midfielder who is skilled at getting the ball out. This will be his third season in the ranks of Real Madrid.