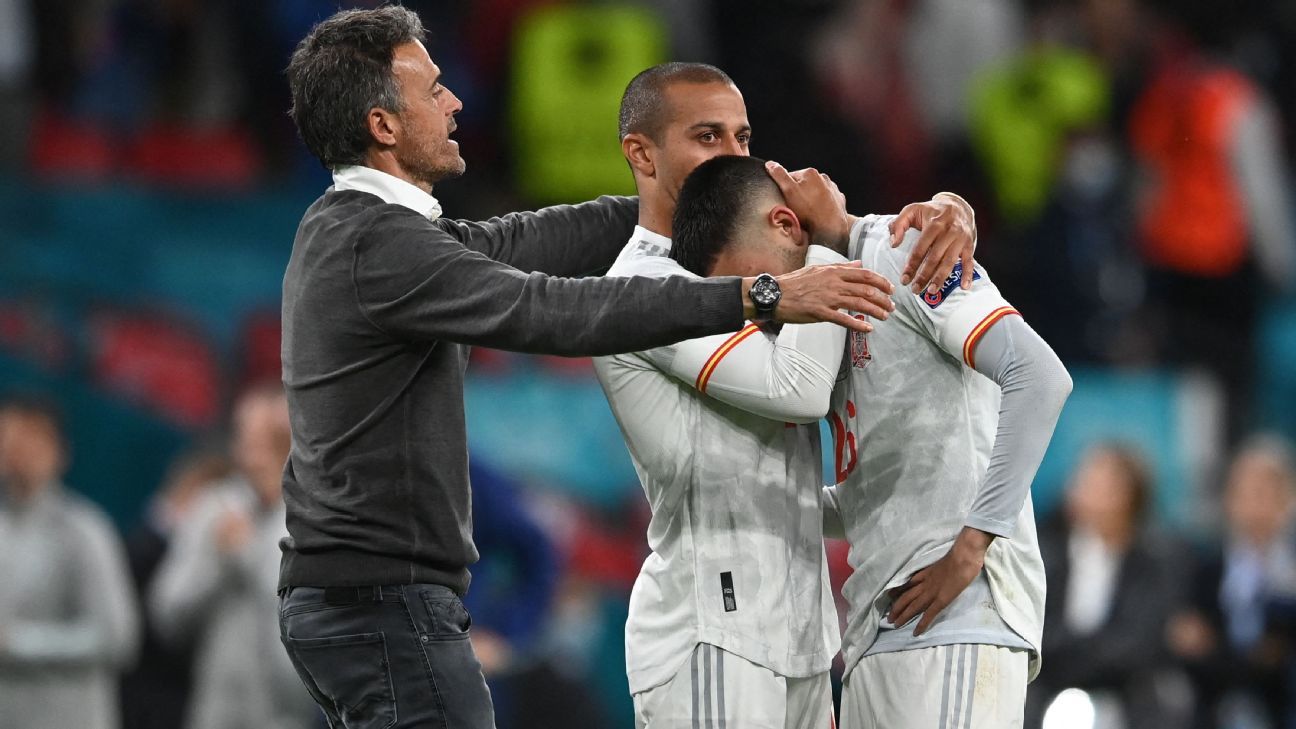 The controversial Luis Enrique has endowed the selection with an identity already recognized and recognizable at every moment of the game, with his high pressure and possession; the two bases on which everything circulates

Since Luis Aragones, there is no such an author’s Spanish team, with such an evident stamp of a coach, as the current cycle of Luis Enrique, the leader of a project that, beyond his elimination on the verge of the final, comes out of the Euro 2020 Course to Qatar 2022, facing adversity with determination and with a promising look towards a successful future.

The semifinals have been the limit in this Eurocup. Not the roof of the team, which points to higher heights. “Hopefully this is the beginning of something very big.”proclaimed the central Eric Garcia, whose selection rebelled against the doubts and concern of the two draws against Sweden and Poland, of which the only irrefutable explanation was the lack of a goal, to resurface as a team, with all its significance in a sport with a concept as indispensable as the collective.

“We are a team. There is no doubt”, emphasizes the technician, while extracting “the experience” who wins his team in the continental tournament, which has closed undefeated: “We have many young players who have contributed things that are difficult to understand because of their age. We have behaved like a team from start to finish.”

Directs it Luis Enrique, surrounded by criticism from the list you set up, with the absence, for example, of Sergio Ramos, or since he chose 24 instead of the 26 allowed, with a debate fueled by the positive for covid-19 that gave Sergio Busquets, but reaffirmed in his idea, his conviction and his optimism to provide solutions to a team that matures at full speed. Since 2002, nobody changed the call from one final phase to another so much.

The meritorious journey to Tuesday’s semi-final at Wembley, to “outstanding low, the 9” that the coach gives his team, is unintelligible without the decisions he has made, without the feeling he has created about the most valuable in football, the group, whose dimension is even greater, more transcendent, when difficulties appear, when the positive of the captain occurred, when it was pointed from outside to Alvaro Morata for the missed goals, when everything was played on the last day against Slovakia and now, when the explanation to the elimination is not at all simple.

“I am part of a group of 24 players and more than thirty workers on the staff that, it is a cliché to say, but it is a family. Many non-positive things have happened to us that we have been able to solve. The spirit that lives within is very enthusiasm, to help and improve ourselves. When the word ego departs, a team appears and it is a marvel to be part of it. We are a team eager to represent Spain “, exposed after 3-5 to Croatia, a victory that revealed the character and personality of his group.

It is a group much younger than veteran, which was described as inexperienced, because only seven players had a journey in the final phases of the major tournaments (David De Gea, César Azpilicueta, Jordi Alba, Sergio Busquets, Koke Resurrección, Álvaro Morata and Thiago Alcántara). Seventeen were before its premiere. The technician does not look at the age. Pedri, for example, he has become the youngest footballer in Spain to make his debut in a Eurocup.

“I already said that I would like to bring the players that I saw fly, regardless of how old they were, what teams they were and what they were called. That is what we are doing and I will tell you what I will do in all my trajectory with the selection “, the technician reviewed in this Euro 2020.

With all the decisive vision that he gives to the exit of the ball from behind, he has relied on Unai Simon unalterable to give you all the Eurocup as a starter, with the response he gave to Switzerland as the highest exponent or with the reaction he had to his blunder against Croatia, and he has added to Aymeric laporte to Spain for the tournament.

He also decided to wait for the captain, Busquets, aware of the importance of a figure like him, champion of everything, for the future of the Eurocup; trusted more than anyone in Morata -This Tuesday he left him as a substitute for a tactical issue, with the accurate irruption between the lines of Dani Olmo to overwhelm the Italian rear – when he did not hit the goal against Sweden; I call Pablo Sarabia, that even he did not intuit his presence in the competition to be as decisive as he has been before Slovakia and Croatia; recovered Koke Resurrection or César Azpilicueta, and bet on Ferran torres, Eric Garcia, Marcos Llorente, Dani Olmo …

And the phenomenon Pedri, with only 18 years. “Has anyone noticed what an 18-year-old boy has done? I have never seen that from anyone. Not even Don Andrés Iniesta. At 18 he played like that. It’s incredible. It’s a unique thing.”, highlighted Luis Enrique, who bet, in short, for a team over individualities. For a block in which as soon as one can start as another.

From Wembley to Wembley, from the first call in 2018 in the 1-2 to England to the semi-final on Tuesday in this Eurocup, only eight players have repeated on the list, in that constant movement that gives Luis Enrique to your team, attentive to the combination of the moment and the qualities to build your group.

59 footballers have played with him (60 with Robert Sanchez, waiting for his debut) throughout the course from then to now, with five goalkeepers, ten center-backs, eleven wingers, eleven midfielders, fifteen attackers (midfielders, wingers or strikers), six forwards and a versatile man like Marcos Llorente, which he proposed first as a right back and then relocated as an interior.

And above all, Luis Enrique It has endowed the national team with an identity that is already recognized and recognizable at every moment of the game, with its high and overwhelming pressure (whose mismatch sometimes promotes fissures between its lines, although they are increasingly punctual) and with possession; the two bases on which everything circulates.

“I am a leader, that is evident, I have always said it, but a leader who is outside the field. Important leaders are those who are on the field and those who do not participate and continue to be leaders and are essential, because they help their team. Of those we have many in my team “, he expressed the day before against Italy.

“The difficult thing is to score goals, press well, advance the line and be attentive to coverage, the difficult thing is what the players do”, the coach added, to whom he and his coaching staff have provided the tools as a team, as exhaustive as it is in tactical work, in the occupation of spaces, in which pressure is a mechanism as refined as it is suffocating for its rival .

“I think the team has grown, quantifying that is quite difficult. For several concentrations, before the Eurocup, I have seen many positive things, a profile of young players who have a lot of desire to succeed. It is not that they have deceived you or has deceived anyone. Since we arrived, our goal was to form a team regardless of the age of the players, the team they belonged to and that the fans can feel proud of their players. I think we have achieved it “, He said Luis Enrique, the leader of a strengthened project, who gives off vitality and maintains his optimism towards the Qatar World Cup 2020.