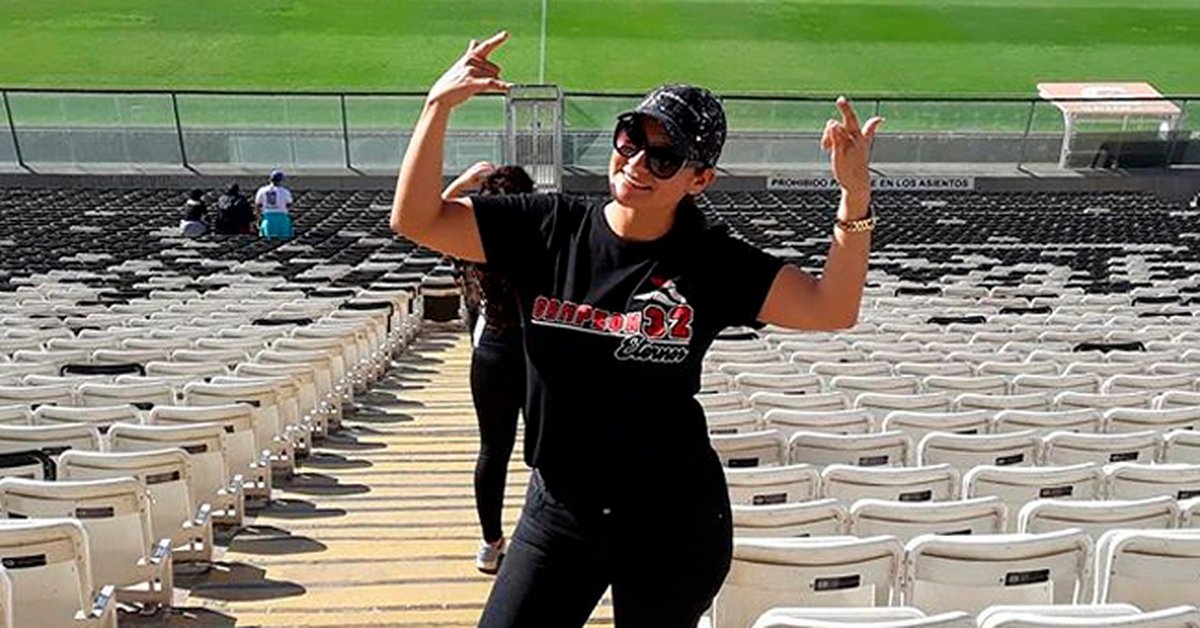 In the photo, Solange Paredes posing at the Estadio Monumental de Colo-Colo, in Santiago.

This Tuesday the capture of a dangerous criminal gang that stole and cloned vehicles was known in the capital of Chile, which was made up of the sister of a well-known national soccer player.

It is about Solange Paredes, sister of the footballer and historical scorer of the Chilean league Esteban Paredes, who scored more than 216 goals in his career, most of them wearing the Colo-Colo club jersey.

According to the first antecedents of the case, The criminal gang had the purpose of stealing high-end cars, which were later cloned and entered into the Civil Registry in order to be sold to other people.

For the director of the Chilean Investigative Police (PDI), Sergio Muñoz, the capture of the gang is a “great police success, which has to do with a dismantling of a gang that proceeded to clone vehicles, generating fictitious companies, with which these vehicles were made through slamming doors or locked and then they were legally registered, in order to incorporate them into the formal market ”.

The first investigative advances also discovered that Solange Paredes had an “important role” in the criminal group.

“It is not a minor role, it is a person who carried out procedures related to the transfer of vehicles, go to notaries and provide the documentation that would allow their registration, ”explained the prosecutor Manuel Guerra, from the East Prosecutor’s Office.

The operation resulted in the total dismantling of the gang. In total, 18 were arrested and 20 high and mid-range vehicles were seized, along with guns and cash. The band will be formalized by the crimes of receiving vehicles, fraud and carrying weapons, among others.

Finally, the Minister of the Interior, Rodrigo Delgado, argued that “Here there is a patrimonial damage to many families, but also an emotional damage. Therefore, highlight this investigation, which has come to fruition. There are detainees, there are vehicles that will be replaced to the victims ”.

However, It is not the first time that the Paredes have been talked about in extra-football terms. For example, December 15, 2015 the footballer was arrested by the PDI for buying three stolen 65-inch LED televisions from the vicinity of the Colo-Colo Stadium, in Santiago.

“I think all people make mistakes. When you do ten good things, but one bad thing, you are immediately crucified. Everyone criticizes you, everything is bad. And you have to live with that, because they remind you of it every day, ”Paredes said at the time.

On March 22, 2019, two cousins ​​of Esteban Paredes were arrested after a violent robbery in a video game store, located in the commune of Vitacura, in Santiago. The antisocials were identified as Miguel Ángel Paredes Matis and Sebastián Vega Paredes and both were in preventive prison after causing this crime.

On May 7, 2020, a 23-year-old half-brother of Esteban Paredes died in the middle of a robbery carried out in the Pudahuel commune, in Santiago de Chile.

According to the information provided at the time, the event occurred when a group of 3 to 5 subjects forcibly entered a home on Avenida El Canal in the Ciudad de Los Valles condominium, carrying firearms and breaking the access door.

Different Chilean authorities moments after the vehicle cloning gang was stopped by the PDI.

However, a few moments after entering the place, there was a confrontation between the antisocials and the occupants of the house. The latter killed Esteban Paredes’ half brother, who was stabbed to death on several occasions, while the owner of the house was shot and had to be transferred to a health center.

Also, in that confrontation, two members of the household were wounded, and the case was investigated both by the Public Ministry as well as by the Homicide Brigade of the PDI.

Finally, In October 2016, an uncle of Esteban Paredes was imprisoned for drug trafficking. The subject was identified as Miguel Ángel Paredes, who was the leader of a gang that brought drugs from Bolivia. ANDIn his power he had more than 70 kilos of pressed marijuana.

“Portonazos” and “lockups”: the new criminal modality for car theft in Chile that claims fatalities
They arrested a criminal in Chile who was recorded chasing his victim: he assaulted her, burned her car and uploaded the video to social networks