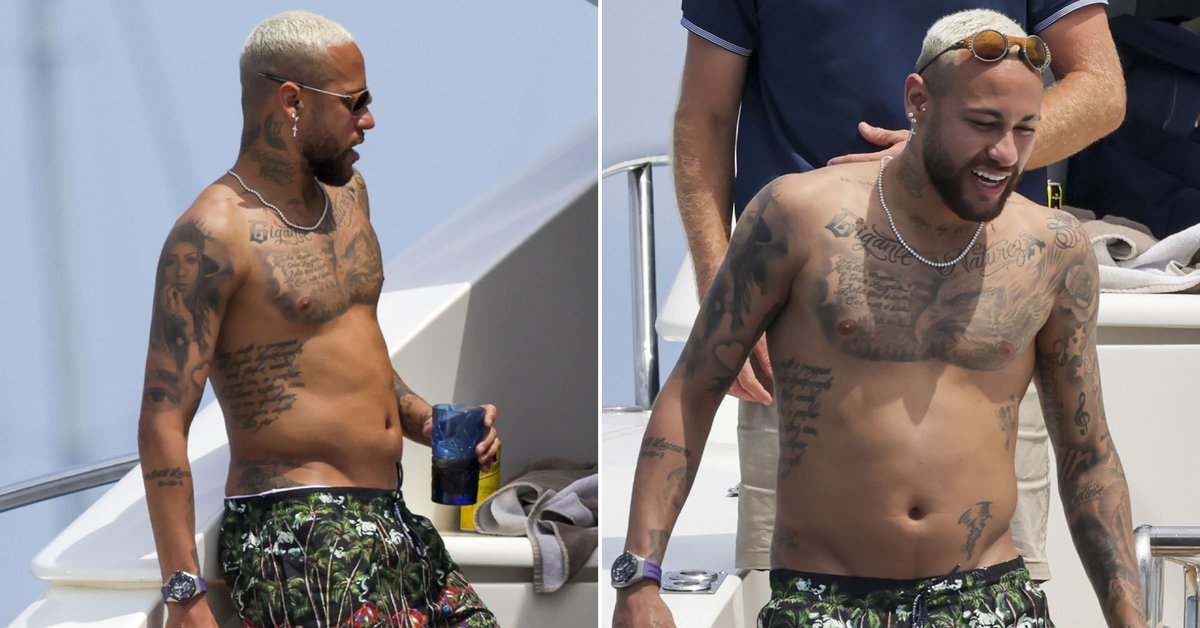 
Neymar is for these weeks enjoying a well deserved vacation. After a grueling 2020/21 campaign in which he failed to conquer the Champions League with the Paris Saint-Germain (PSG) nor Ligue 1, the Brazilian footballer played the America Cup with his country and reached the final, where he was defeated by the Argentina. At the end of that duel held at the Maracana, the forward was finally able to begin his rest.

The former Barcelona spent a few days in his homeland with friends and family and later set out on a trip to Ibiza, destination chosen by various world soccer stars. There he is with his son, his ex-partner (mother of the child) and her husband, which shows the good relationship he has with his ex-girlfriend. In addition, he also shared an afternoon with the Italian Marco Verrati, one of his teammates.

But Ney He was always careful on social networks to show himself with a shirt on or another garment that hid his abdomen. Now some paparazzi were able to capture the footballer aboard a yacht sailing through the waters of the Mediterranean Sea. There, the man emerged from Santos is seen completely relaxed and in leather, enjoying the warm climate of the place and the landscape. But what most attracted attention was his physique.

Neymar on the yacht with his son (The Grosby Group)

Far from showing off abs, the 29-year-old’s body seems to denote a lack of exercise. Unlike figures like Cristiano Ronaldo or Lionel Messi, who during their vacations continue working in the gym, the photos of Ney suggest that he chooses to enjoy workouts away.

In the images it is also seen that the look. At the Copa América, his hair was dyed blonde, but longer than it is now. In addition, a few weeks ago other photographs had become viral where he was seen with false braids, something that he seems to have quickly discarded.

The truth is that Neymar is happy, in Mayan and sunbathing with dark glasses, a watch in his right hand, ear rings and a chain that hangs from his neck. Although on social networks several users have been alarmed by their physical condition especially considering that this Saturday PSG will debut in Ligue 1 against Troyes. While the Ten will not be present, fans seem concerned about the time it will take to get ready to be at his best.

In this context there were Gallic portals, like RMC Sports, who disseminated the images and criticized the status of who is the top star of the French league, although they did not publish information on how these photos fell in the corridors of PSG.

“Cristiano with 36 years and Neymar with 29, what a difference! …. For this reason he has won 5 Ballon d’Or and Neymar none .. CR is the fruit of years of work and professionalism that some imitate but do not match. Talent is not everything! ”, Posted a user on Twitter who compared photos of both players. At the same time, several accused him of drinking too much beer on his days off.

Neymar will have to return to Paris in the next few days to join the work under the Argentine’s orders Mauricio Pochettino, there he will meet companions like Leandro Paredes, Kyllian Mbappé and Mauro Icardi, but also with luxury reinforcements such as Sergio Ramos, from Real Madrid, and Gianluigi Donnarumma, who came from Milan. The team misses the Brazilian striker since without him this Sunday they lost the French Super Cup to Lille, played in Tel Aviv. Although, in that duel there were no stars like Angel Di Maria, Marquinhos or Mbappe, nor any of the signings.

The images of Neymar on vacation in Ibiza

This is Neymar, days after returning to France to join PSG (The Grosby Group)

Diving from a yacht and a look that made it a trend: the new photos of Lionel Messi’s holidays in Ibiza
“I saw him dead”: the heartbreaking testimony of a partner of Christian Eriksen who assisted him at the time of his collapse in the European Championship
Harry Kane’s decisive decision for Tottenham to sell him to Manchester City