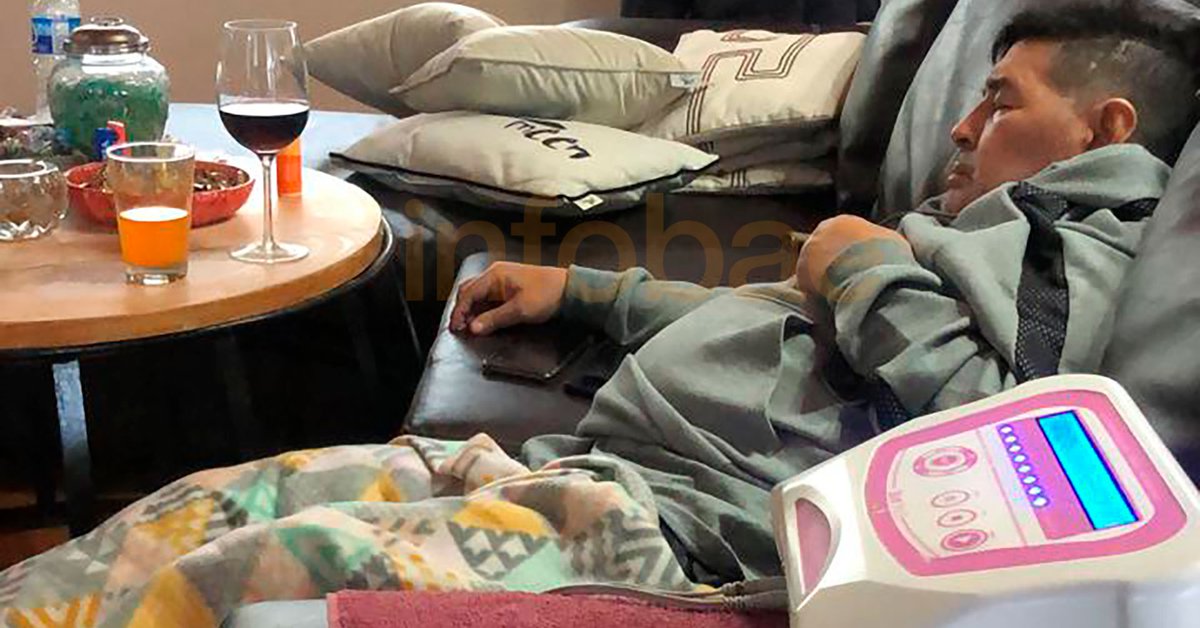 One of the last known images of Diego Maradona. Later, he died without the medical assistance that a patient of his type would have required.

In a room specially equipped for the occasion in the San Isidro Prosecutor’s Office, a few minutes after 12 noon, the round of investigations began in the file investigating the death of Diego Armando Maradona. The first to speak in front of the prosecutors was Ricardo Omar Almirón, the nurse who was in the Diez house that fateful November 25 until 7 in the morning when he turned in the turn. And his words generated a strong commotion.

He explained that he saw Diego for the last time at 6.30 “from the door.” In addition, he detailed all the elements that he requested and were not provided. He also referred to a possible new forgery of the signature of the Ten. The testimonies of the accused will continue throughout this week and the one that comes with the modality of one inquest per day until Monday June 28 when it is the turn of Leopoldo Luque, the last to speak. All are accused of simple homicide with eventual intent.

The investigation, in which the defendants can lie without this causing any problem as established by the penal code, began with the usual protocol of reading the accusation, the facts and the evidence against them. In addition to Almirón, his lawyer Franco Chiarelli, the attorney general John Broyad and the three investigators who signed the file were present: Laura Capra, Cosme Iribarren and Patricio Ferrari.

Leopoldo Luque is going to testify as accused by the death of Diego Armando Maradona.

The nurse, who gave his report and also answered questions, explained that home hospitalization was, in his view, extremely deficient and even compared it with a previous one in which he had worked days ago. According to his version, they only told him that Diego is a patient “psychiatric”And no one approached him of any kind of medical history even though he asked for it.

He also said that he requested to be supplied with a series of elements and instruments that they never gave him: “I asked for a heart monitor, an oxygen tube, a defibrillator, extenders and IVs but they never gave me them. I also asked for a blood pressure monitor and a blood pressure monitor, which only arrived 3 days after my arrival at the house ”.

Regarding the hours before Diez’s death, he explained that the night before he went to Diego’s room around 10 p.m. and took his vital signs and gave him medication. That was the last time she saw him alive. Story that just the next day at 6.30, before leaving, he saw Maradona “far from the door”.

He also pointed out that he saw it as “tachycardic” and that this was normal in the daily life of the former captain of the National Team. He said that everything he saw was reported in a Whastapp group where his boss Mariano Perroni, the link with the social work Nancy Forlini and the psychiatrist Agustina Cosachov were. Despite the fact that the three of them are already charged, this point was key because it complicated them even more: they were aware of all these situations.

The other unknown point so far had to do with a template and an alleged signature of Maradona. It is that Almirón explained that, already with Maradona dead, he gave his superior Perroni a template with the details of what was done day by day without the signature of the Ten. However, it appears in the file that this document later appeared with a cross-sectional signature that supposedly occupied all of Diego’s lockers. Now it will be investigated if it was falsified.

Almirón is one of those who had already declared in the file, but in a testimonial way a few hours after Maradona’s death. On that occasion he had given specifications regarding the work he did in Tigre’s house: “When they told me about the job I was going to have, they didn’t tell me what kind of patient I was going to take care of, only that he had to check vital signs, provide medications, home nursing issues and evolution of the post-operative scar but at no time did they comment on me or give me an epicrisis of Diego (document prepared by the doctor at the time of discharge) ”.

The round of inquiries will continue on Wednesday precisely with the testimony of the Madrid nurse who was the one who was at the moment when Cosachov and the psychologist Diaz entered the room and found Diego dead. In a brief presented earlier days his lawyer, Rodolfo Baque, anticipated that his client will speak and answer questions from prosecutors. On Friday it will be the turn of the head of the nurses Mariano Perroni and next Monday that of Nancy Forlini who served as the link between Diego’s medical staff and the prepaid medicine company.

When devising the dates of the statements, the investigators left Maradona’s three personal physicians for last as a strategy, as they are the most complicated on the record. The psychologist Diaz will speak on Wednesday June 23, Agustina Cosachov on Friday 25 and finally the neurosurgeon Leopoldo Luque He will have the possibility to defend himself on Monday the 28th.

Today the investigations begin for the death of Diego Maradona
They will criminally denounce Rocío Oliva for threats to Vanesa Maradona
Dalma Maradona’s tears when talking about Diego on the air: “I made up the little story that he is traveling and I’m going to see him again”