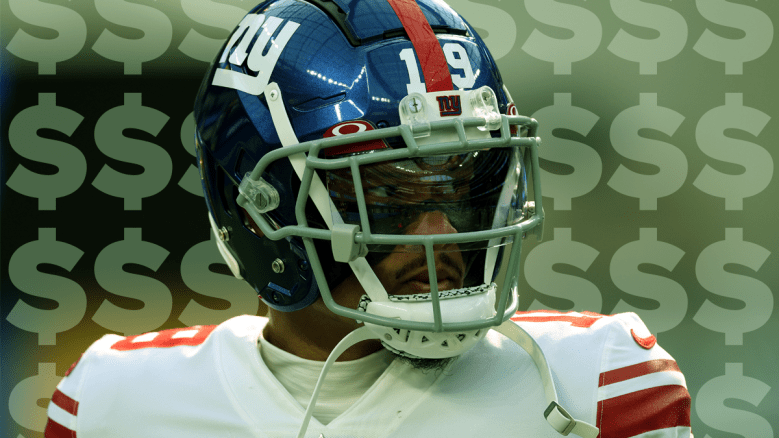 he New York Giants are paying big bucks for their wide receivers. In fact, they are paying more than any other team in the NFL.

The Giants currently have 12 wide receivers on their roster and, according to Warren Sharp on Twitter, they are owed a combined $40,152,615. Sharp also points out in his tweet that Giants wide receivers only produced five receiving touchdowns last season, which was the fewest by any wide receiver unit since 2017.

the New York Giants, at 5 TD

Leading the way in terms of the 2022 salary cap among Giants wide receivers is Kenny Golladay, who is scheduled to count $21,150,000 against the salary cap this season (per Spotrac). Golladay signed a four-year, $72 million contract with the Giants in free agency last spring and didn’t score a single touchdown last season.

In 2019, Golladay led the NFL in touchdown receptions with 11.

Sterling Shepard has the next-highest 2022 salary cap among Giants wide receivers at $6,303,823, per Spotrac. Shepard only scored one touchdown last season and hasn’t scored more than four touchdowns since his rookie season (2016), when he scored eight.

The Giants and Shepard recently agreed to a restructured deal that will make him a free agent in 2023, according to NFL Network’s Ian Rapoport and Mike Garafolo.

New York’s next most expensive receiver is Kadarius Toney, who is expected to count $3,118,070 against the salary cap this season. Toney joined the team as a first-round draft pick last offseason and, like Golladay, didn’t score a single touchdown in 2021.

The only other wide receivers on the Giants’ roster with a salary cap above $1 million this season are Darius Slayton ($2,598,497) and Richie James ($1,065,000), per Spotrac. James signed in free agency this offseason, while Slayton returns for his fourth season with the team.

Slayton, for what it’s worth, led all Giants wide receivers with two touchdown receptions last season. That total is 75% lower than the career-high eight touchdowns he scored for the Giants as a rookie in 2019.

Tight end Evan Engram, who doesn’t account for the wide receiver room, actually led the team with three touchdown receptions last season. Running back Saquon Barkley was right behind him with two.

Head coach Brian Daboll knows the wide receiver’s problem is one he needs to fix in his first year with the Giants. He says that he has been watching videos of old games from Kenny Golladay and Kadarius Toney, in particular, to find out what works for them.

“I came back and saw the Detroit [Lions] seasons and [Golladay] I had some good seasons, like when I went back and watched KT in Florida,” Daboll said in early April, according to the Giants’ official website. “You try to do as much work as you can with these guys before they get there to see what they’ve been successful at and figure out a way to use them on the things they’ve excelled at.

“You have to see them do the things that you’re going to ask them to do on offense. There are plays that we’re going through right now, heck, if those guys want to turn inside on this route, let’s find out when they get here and ask them.”

Daboll has a history of getting the most out of a star receiver. While serving as offensive coordinator for the Buffalo Bills, Daboll’s system helped Stefon Diggs to his first two Pro Bowls. Diggs led the NFL in receptions (127) and receiving yards (1,535) in 2020, then set a new career high in receiving touchdowns (10) in 2021.

The Giants’ best TD reception in 2021 came from a lineman

If wide receivers fail to produce again this season, at least the Giants know they have an absolutely deadly receiving option in left tackle Andrew Thomas.

This play was a work of art, but it’s embarrassing that Thomas finished the 2021 season with as many touchdown receptions as New York’s top three wide receivers combined.