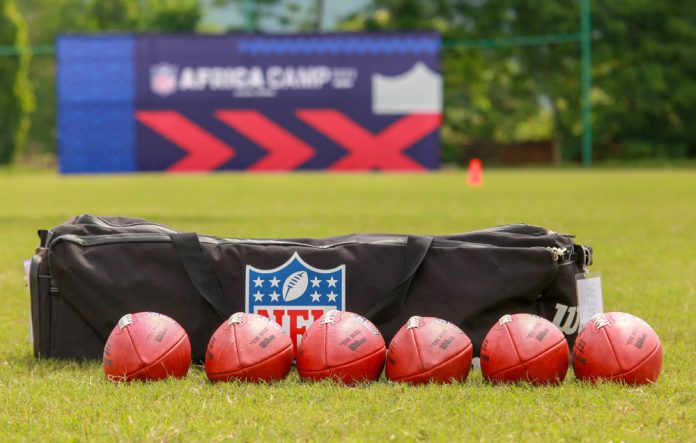 Chicago (USA), (EFE).- The NBA and the NFL have never been so close to Africa. Both leagues invest millions in their expansion and support projects for the continent. The BAL, the African league founded by the NBA, reached its second edition; The NFL this week debuted high-performance fields in Ghana. “I am an example of what it means to have an opportunity,” says Nigerian Festus Ezeli, NBA champion with the Golden State Warriors in 2015, in an interview with EFE.
With its 12-player league, training centers, and synergies with American college teams, the NBA stepped up. The football academy in Africa has already trained three players who have signed professional contracts in the NFL. Coaches and players like Ime Udoka, Giannis Antetokounmpo, Serge Ibaka or Festus Ezeli, all of African origin, set the example.
“What the league does in Africa is to give an opportunity, it shows our boys that basketball can be a job opportunity. It is what is needed. I am an example of what it means to have an opportunity,” Ezeli told EFE.
“It makes me very happy to see that the league wants to develop talent in Africa and that it offers a platform to become successful,” he added.

A MATTER OF OPPORTUNITIES
Ezeli recalled that in his youth Africa still did not have opportunities like BAL. He arrived in the United States “without knowing anything about basketball” and it was there that he managed to turn this sport into a profession.
“I got a school to pay for me, I was able to turn it into a lot of opportunities and that started with an opportunity to play basketball, something we didn’t have yet when I was playing there. There is money, income, businesses, jobs, and all of that comes from basketball,” he recalled.
Winner of the first title of the Warriors dynasty under Steve Kerr, in 2015, Festus Ezeli has played for five years in the NBA, also wearing the Portland Trail Blazers jersey.
A serious knee injury prevented him from continuing to compete in the NBA and now, at 32, he works as a journalist for the ‘NBC Bay Area’ network: “Of course I would like to continue playing, but in life there are many ways to win and I’m really enjoying this stage.”

THE ‘BAL ELEVATE’, A SHOWCASE FOR HUNDREDS OF TALENTS
Inaugurated in 2021, the BAL has twelve teams, from different African countries, which are measured in a three-month league made up of a regular season and ‘playoffs’, the same format as the NBA.
Tunisians US Monastir were crowned champions this year, after Egyptian side Zamalek won the first edition.
An extraordinary boost to talent development and also to the visibility of African sport, with BAL matches broadcast in 215 countries and fourteen different languages.
In addition, the NBA launched this year the so-called ‘BAL Elevate’, an initiative that allows twelve talents captured through the NBA training school in Africa to join the twelve teams in the league.
Many of them are already on the agendas of American NCAA teams, an ideal springboard for a possible jump to the NBA.
An important part of the NBA’s commitment to Africa is represented by the league’s own members: Ime Udoka, of Nigerian origin, led the Boston Celtics one step away from the title, Serge Ibaka, of Congolese origin, was NBA champion in 2019 with the Toronto Raptors, and countryman Bismack Biyombo had the best regular season record this year with the Phoenix Suns.
They all actively support their countries. In particular, Biyombo donated his salary from this season to Congo to fund charitable initiatives.
“I am very proud of our African players. One of the best things we do is that we never forget our home. Whether it’s me, Udoka, Biyombo or Serge (Ibaka), we all do a great job of giving back. Seeing us do what we are doing in this sport is very inspiring,” said Ezeli.

NFL LAUNCHES ACADEMIES IN GHANA
As part of its expansion project, the NFL launched an initiative in Ghana under the banner ‘NFL Africa, The Touchdown’, which includes talent recruitment and training centers led by African stars of the American league.
To preserve the health of the youngest players, training sessions are carried out without violent contact.
The Nigerians Uchenna Nwosu, of the Seattle Seahawks, Ogbonnia Okornkwo, of the Houston Texans, the Ghanaian Jeremiah Owusu-Koramoah, of the Cleveland Browns or the Liberian Kwity Paye, of the Indianapolis Colts, are some of the stars who joined this project.
There are more than a hundred players of African origin who compete in the current NFL and the American league intends to increase this number, helping the many young people of the continent to express their talent to the fullest.
Double Superbowl champion Osi Umenyiora, New York Giants legend, has his particular foundation in Africa, ‘The Uprise’, which recently allowed three players to sign contracts with NFL teams: Chigbo Roy Mbaeteka (New York Giants ), Haggai Chisom Ndubuisi, (Arizona Cardinals), and Kehinde Hassan Oginni (Kansas City Chiefs).
This is one more step for the NFL in its international presence to promote the practice of this sport. This year the Philadelphia Eagles joined the internationalization plan called (IHMA), with Africa and Oceania as focuses of interest.
The Eagles were the latest to join a project in which 19 franchises are involved, with access to 30 international marketing areas in 10 different countries, NFL executive vice president of business Peter O’Reilly recently reported.
Andrea Montolivo