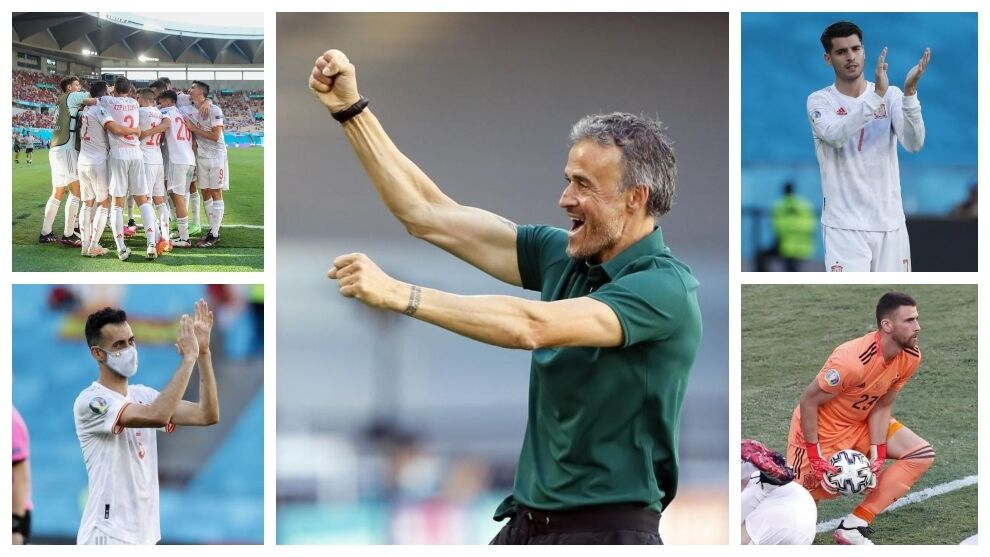 The bonfires of San Juan awaited football wood, but Luis Enrique and his team knew how to dodge the fire with goals and good play. The coach, especially, has been highly criticized and noted, but has managed to maintain the you are the identity of a group that has always believed in a technical who has stood up for his own from the first moment, with gestures that have convinced everyone, from the first to the last of the internationals, of the one who plays and of the one who has not appeared on the grass. These have been the successes of the technician.

1. The group, closer than ever

At all times, Luis Enrique has prioritized the group over any other aspect. He even did it when making the list. The detail of summoning 24 players instead of the 26 allowed by UEFA, questioned gesture, sought to avoid the fact of having to leave many footballers off the list. In fact, Diego Llorente has been the first and only dismissal so far.

The goal of the coach of forming a pineapple is more than successful. On few occasions have you been able to see so many gestures of support from one to other players on the lawn, with the climax after the failure of Morata at the time of launching the penalty. One by one they passed the striker to cheer him on and looking for oblivion to disappear from the mind of the Juventus player. In addition the complicity of the stands was sought, with Luis Enrique at the helm, making gestures and claiming the fans’ spirits.

The presence of Azpilicueta and Eric Garca was a gesture towards everyone that each of the 24 can have their moment during the Eurocup. Decisive game and the technician gave the alternative to players who had not been released.

2. The wait for Busquets has been worth it

It was not an easy decision due to the uncertainty that always surrounds a positive for Covid, but Busquets’ role in this group was too important as if to renounce him without fighting for his return. The azulgrana was the guide of the group and his return, like the Diego Llorente, was celebrated by all. The bracelet returned to its owner.

What was seen on the pitch against Slovakia dispels any doubts of what Barça can still do. He helped the partner, distributed and gave meaning to everything he did. The wait was worth it.

As soon as Kuipers pitted the penalty, Luis Enrique had it very clear. The one chosen to launch the maximum penalty was none other than Morata. Busquets looked for the ball, but the decision was firm. It was the continuation of “Morata and ten ms” of the previous one of the second party.

Luis Enrique remains convinced of Morata’s performance, of how much it contributes, of the occasions it generates, of what he presses and what makes his companions play with his movements. It has been shown that he is the reference in attack and thus continue to be in the Eurocup.

4. One stop of Unai Simon, the success of the pressure

The five goals against Slovakia is the most striking, but One of the keys to this selection is the wild pressure after losing the ball. The rival feels suffocated, the ball barely lasts on their feet and that means that they hardly reach Unai Simn’s area.

The Athletic goalkeeper so He has only made one stop so far in the championship and went to Lewandowski. Except for the other two shots that hit the post, there have been no more shots between the three sticks. They barely arrive in Spain in danger and that is due to the risks that are assumed when pressing and that can lead to some dangerous cons, as happened especially against Sweden.

5. The leader of everything is Luis Enrique

Even the technician himself recognized it. “Every coach must have the spirit of a leader.” And so it is in this case. That spiritual leadership has grown with gestures and decisions that the Asturian technician has been assuming. The players have accepted it and accepted it as normal.

Every coach should have the spirit of a leader

That leadership, moreover, has been reinforced day after day with Luis Rubiales’ full support for his coach. There has been no hint of doubt in any sense. The support has been and is total and absolute. Sports is a matter for Luis Enrique because he is the boss, as he demonstrated when making the list.