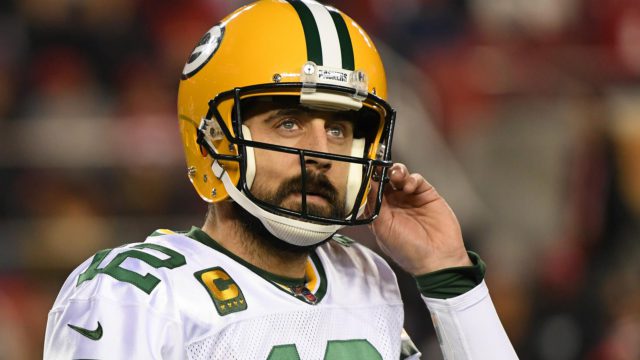 Since the schedule for the 2022 NFL season was announced, this Sunday’s game against the Packers is marked in red for the Cowboys. Aside from coach Mike McCarthy’s return to Green Bay four years after he was fired, this was supposed to be a pretty tough matchup for Dallas. Especially for who is in charge of the rival offense: Aaron Rodgers.

And is not for less. Since he took over the starting quarterback role in 2008, Rodgers is 7-2 in nine games against Dallas including playoffs. In addition, in the regular season, the reigning NFL MVP has recorded 1,940 passing yards, 11 touchdowns and only one interception against the Cowboys. This has been key so that the historic series between both teams is now 20-17 in favor of the NFC North team.

However, the current reality for Rodgers and the Wisconsin team is different.

The Packers come into this game with a 3-6 record and five straight losses. The most recent, 16-9 against the Detroit Lions last Sunday, was a new low point for Rodgers and company. That day, the quarterback was very erratic, being intercepted three times. Two of them, in fact, were in the end zone.

But that is not all. The Packers’ passing game remains noticeably affected by the departure of Davante Adams to the Raiders during the offseason. In fact, Rodgers is showing a lack of connection with his current receiving corps. In addition, injuries are affecting several units of the team led by Matt LaFleur.

Besides, we must not forget that Aaron Rodgers is having a season far from expected. Following the extension that made him the highest-paid QB in the NFL, the dramas seen with Rodgers in past seasons were expected to come to an end. However, his performance is disappointing. Since December 2021, Rodgers has not recorded a game with 300 or more passing yards. Besides, he has seven interceptions this season.

Aaron Rodgers isn’t happy after his 3rd interception of the day against the Lions. BRUTAL.🫥🫥

The Cowboys are not confident in the situation of the Packers

Given this situation, it is not surprising that Green Bay is an underdog for Sunday’s game against Dallas. And it is not for less, since the team is adding more problems to its roster due to injuries, apart from the fact that it has not added reinforcements that provide stability.

However, the Cowboys are not confident in this situation at all. And they don’t trust the current low level of Aaron Rodgers either. This was revealed by two Dallas defensive players in statements to the media this week.

“A-Rod is one of the best quarterbacks to ever play this game”safety Jayron Kearse said Monday. “He does a lot of things well: he can manipulate the defense, he can get out of the pocket if you keep him in there, or if you want to get him out of the pocket he’s good at running and passing on the run. He stays in sync with his receivers where they are able to get those extended plays.”

Like his position partner, safety Malik Hooker is also keeping some caution heading into the matchup against Rodgers and the Packers.

“I’m sure everyone on this team has great respect for Aaron Rodgers and the way he has played throughout his career.”Hooker said Monday. “(The Packers) have lost a few games lately, but there’s nothing to look at. They are not a bad team, they have talent and good players. We just have to go out there and keep playing the way we know how, trying not to take this game lightly.”

The Packers have won 8 of their last 10 matchups against the Cowboys. Who gets the W this Sunday?

Of course, the Cowboys know what it would take for the team to beat Aaron Rodgers and the Packers at Lambeau Field on Sunday. This, especially considering that Green Bay has won eight of the last ten games against Dallas.

“You want to play against these guys, and you want to win these types of games.”Jayron Kearse added. “This gives you a huge boost and great confidence. If you go out there and beat a guy like Aaron Rodgers, you feel like the sky is the limit.”

As for the emotional implications this game could have for Mike McCarthy, the Cowboys coach is also clear about his priority for Sunday. This, it is worth mentioning, despite his long period in Green Bay and the links he built there.

“I really think we have to prepare to win and that’s where my mind is with this game.”McCarthy said during a news conference on Monday. “Obviously, I have fond memories of my time in Green Bay. But it’s been four years since I worked there. I am looking forward to taking my team there. It’s an experience I want them to maximize. But, most importantly, we are going to win the game.”

Despite his past connections to Green Bay, head coach Mike McCarthy only has one mission: “we all want to go there and win the game.”#DALvsGB | #DallasCowboys

It is true that Sunday’s game between the Cowboys and Packers has many implications: the rivalry between the two, the bitter memory of the 2014 playoffs, the return of Mike McCarthy, the challenge of defeating Aaron Rodgers… However, the cowboy team he knows not to underestimate his rival, even if he is on a losing streak. And much less if your quarterback has been named NFL MVP in the last two years.