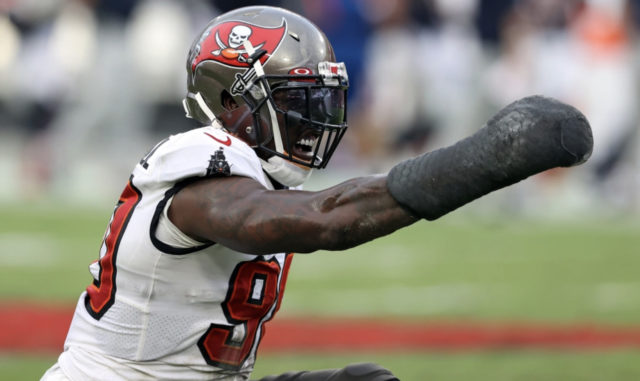 In the offices of the Cowboys, the movements continue to see the talent that they could add for 2022. Little by little, they have been signing players from the house, evaluating the positions and bringing talent from the league. As has been the case in particular with catcher James Washington. Who signed for one year for the organization.

Now, as expected, there are certain speculations and rumors that, according to various sources, could be true. Given all this, there is talk of the possibility that the lone star team wants to take over the services of linebacker Jason Pierre-Paul. Who, despite his current status, continues to be a benchmark throughout the NFL.

Cowboys have shown interest in former Buccaneers edge defender Jason Pierre-Paul, but there is “nothing imminent” as of today, source said. Pierre-Paul played through a serious shoulder injury in 2021 before offseason surgery. @JFowlerESPN first reported team’s interest.

With a 12-year career, JPP is a veteran of the discipline. In fact, he was the 15th overall pick in the 2010 Draft for the New York Giants. In the rival organization of the Cowboys in the NFC East, he stayed for a total of eight seasons, being champion of Super Bowl XLVI. Also, the New York team traded the defender to the Tampa Bay Buccaneers. He would end up playing four seasons with the latter and winning the Super Bowl for the second time in its LV edition.

As if that weren’t enough, he has a career with 91 Mariscal sacks, 604 combined tackles, 21 fumbles, ten fumbles, four interceptions and 61 passes defensed. Clearly, he has been a consistent player in virtually all of his professional seasons.

Jason Pierre-Paul’s first game back since recovering from a broken neck and he gets a sack on the first snap 💪
(via @Buccaneers)pic.twitter.com/cDLCl4ZREf

Perhaps the great detail regarding his performance has to do with his numbers in the 2021 season. The player signed in 2020 with Tampa Bay for two seasons and 27 million dollars. However, during his last stretch on the NFC South team, the defender had a year to forget. A shoulder injury limited his production ability and despite appearing in 12 regular season games, his numbers weren’t exactly the best. JPP would finish 2021 with 31 combined tackles, 2.5 Mariscal sacks, one fumble and four passes defensed.

Of course, the player underwent surgery in mid-February to deal with his discomfort. Which according to Jason himself, has been the worst and most painful of his career. “They are going to see me kill when I return,” said the linebacker through his networks. “I’m telling you now, I told you.”

Although it is true that his 2021 campaign has been the worst in his career as a professional, there is at least one compelling reason and it was his injury. Taking a closer look at his career, if we’re just talking about sacks, he’s one of the most consistent pass rushers in the entire NFL. In 2011 winning the Super Bowl with the Giants, he had 16.5 sacks. In more recent numbers, he finished with 12.5 sacks in his first year in Tampa and 9.5 in 2020, when they became Super Bowl LV champions.

Either way, don’t forget that his shoulder injury poses some risk to any franchise interested in having him in their locker room. That of course includes the Cowboys, but as mentioned, he’s still one of the best pass rushers of his generation and certainly deserves a chance. Following the signing of Randy Gregory to the Broncos, the Cowboys need all the help they can get in this aspect of the game.

If Jason gets the trade, we’re talking about a guy who could play right on the defensive line while DeMarcus Lawrence would play left. After all, his numbers and three Pro Bowls (the last being in 2020, which ended up being cancelled) give him plenty of credentials. He aside he’s one of the few with his skills to find himself in free agency at such a level. Since we are not just talking about any linebacker, but he can easily line up on the edges as already mentioned. Just like Micah Parsons did in his rookie year. So the Cowboys should take stock soon and look to sign the player for at least one season.