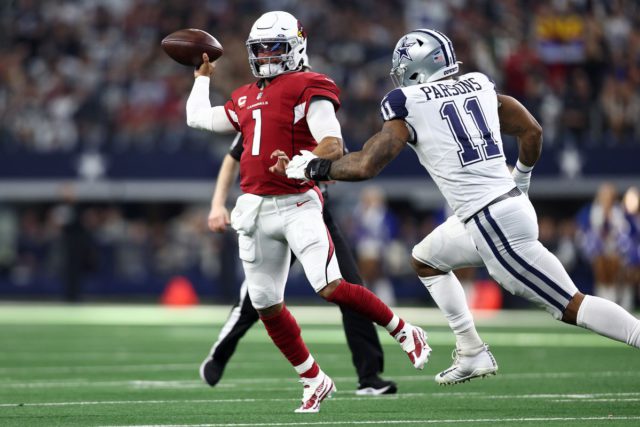 The Cowboys lost to Arizona for Week 17, going 11-5 and fourth in the National Conference. So the whole triple-tie situation with the Rams and Bucs is over, and only a miracle would bring them back to second place. With the Packers’ victory over the Vikings, clearly first place is already impossible.

However, there was a specific detail and it had to do with the rigorousness of the refereeing in the match. It was already known in advance that it would be like that, at least knowing that the judges would be Scott Novak’s group. After the game, Cowboys owner Jerry Jones anticipated that they already knew the group and knew how rigorous they were on the field of play.

“I was expecting those penalties,” Jones said. “Just to show you what I read just before I started, what I read was ‘great concern: this group throws a lot of tissues, a lot of penalties and that’s going to be a concern for us today.’

Certainly that’s what happened at AT&T Stadium last Sunday. Since Dallas got ten total penalties for 88 yards. Despite the game’s shortcomings the team had, especially on offense, it was clearly a critical factor in the Cardinals’ victory. In fact, seven of the first eight penalties were third down. This greatly conditioned any movement of the lone star team.

One of the first to express himself without any regret was receiver CeeDee Lamb. At the press conference after the meeting, he left some controversial statements. “I think the referees dictated the game, it’s no secret,” said the receiver.

Cowboys WR CeeDee Lamb after 25-22 loss to Cardinals: “The refs, I feel like, dictated the game. It’s no secret. ” pic.twitter.com/JRzZxEvA5C

On the other hand, linebacker Leighton Vander Esch would end the day with ten combined tackles, eight of which would be solo. The defender also made clear his impressions after the game.

“The way I see it, I think we play more against the umpires than the other teams,” commented the linebacker. “It was a totally fumble, too obvious. I just don’t understand it with the technology we have today. “

Cowboys LB Leighton Vander Esch: “To me, we’re playing more against the refs than the other teams.”

On unreviewable late play: “It was totally a fumble. … So obvious. ” pic.twitter.com/3djYhNQzIs

Vander Esch’s remarks go hand in hand with perhaps one of the biggest controversies of the entire 2021 NFL season. With 2:51 left, running back Chase Edmonds advanced six yards to receive a tackle from DeMarcus Lawrence and Randy Gregory. However, the running back released the ball, which was recovered by defensive cowboy Osa Odighizuwa.

Before the astonished gaze of the assistants at the Cowboys stadium, the judges had already finished the action and the play could not be challenged. All because shortly before, McCarthy called the third and last time out since the opponent’s schemes were not clearly understood before the snap. Consequently, they also did not penalize the fact that Arizona was late in the game before the Edmonds carry. In other words, the entire play itself had fundamental flaws and the judges let them pass. That with what was at stake, we could be talking at this moment of a different result.

Wooooo Dallas got robbed twice on one play. 👀
Missed the Delay of Game and the Ref blew the whistle early on the fumble pic.twitter.com/DR4nu0sfQS

Of all the players who have complained about judges’ mismanagement, perhaps no one in Dallas was as blunt as DeMarcus Lawrence. At a press conference, the defensive end expressed the fact that there is a possibility of seeing “both teams” in the postseason. As you can read between the lines, he’s not just talking about the Cardinals, but also the umpires.

“We are still a great team, although we were facing two groups tonight, the results did not go as we wanted,” said D-Law. Laughing with reporters when asked about the “two teams,” Lawrence left other statements. “I’m going to let the NFL handle it, I know there is a possibility that we will see these two teams in the playoffs. I hope the NFL can sit down with their group, review the recordings, learn from their mistakes and get better at it. “

Cowboys DE DeMarcus Lawrence said they were facing two teams in Sunday’s 25-22 loss to the Arizona Cardinals: “I know it’s a possibility that we see both of these teams (Arizona and the officials) in the playoffs.”

While it is true that there were a lot of controversies, especially in that last Arizona offensive series, not all the statements are from complaints to arbitration. For rookie Micah Parsons, the problem is themselves and they must improve.

“I think it’s one of those days where we beat ourselves up,” Parsons said. “I know we can play a much cleaner game.”

Cowboys rookie LB / DE Micah Parsons: “I think it’s one of them days when we beat ourselves. I know we can play a much cleaner game. ” pic.twitter.com/yWPo2AYcb8

Clearly the game was tainted by many penalties and unfortunately that affected the team’s management. However, the fact that some aspects of the game failed in important situations that ended up taking their toll cannot be hidden either.

It is hoped that this can improve already in the last meeting of the regular season against the Eagles. After all, it will be a final test for the first postseason game in less than two weeks. So the Cowboys will have to make a better impression than they did against the Cardinals.

The cowboy players pointed to the arbitration controversies after the