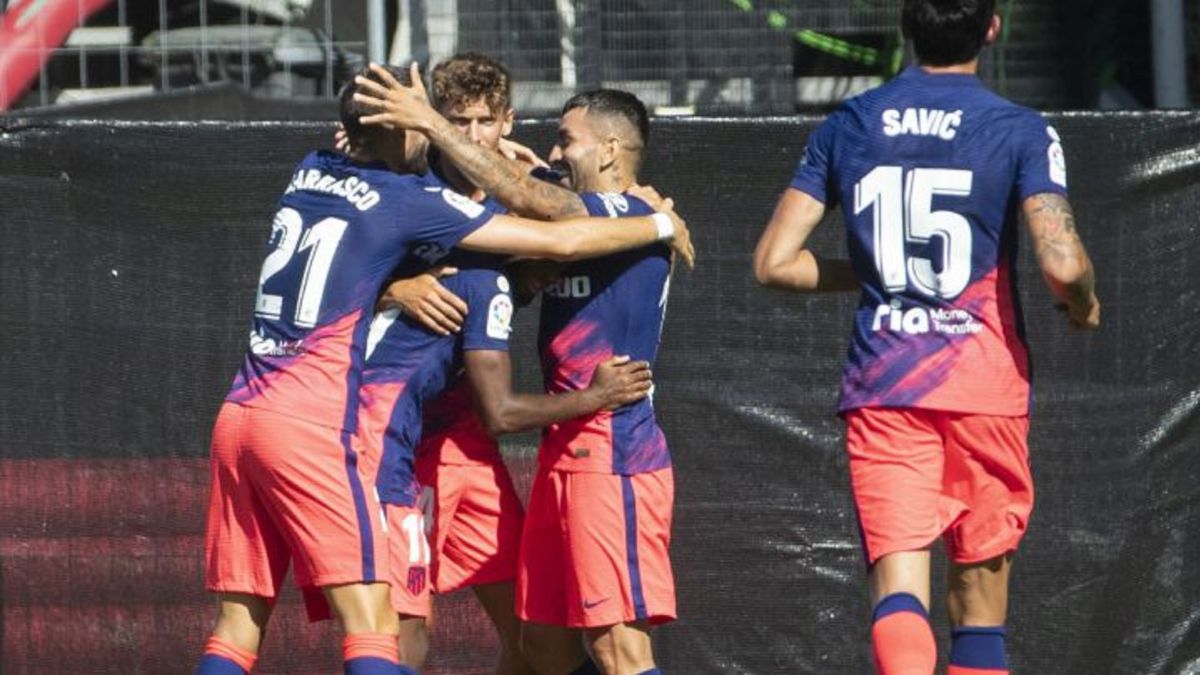 Eighty-five days later, Atlético left their crown in Balaídos’ dressing room with the intention of, within 38 games, re-fitting it on their head. The champion’s crown, the best in LaLiga. He began to defend her in the city from the rain, under the heat wave. And he did it as he earned it: with victory and guts. And a lot of angel. In addition to the people, who returned to the stands, 7,000 people scattered around 29,000 seats that thundered as loudly, as before, in the first step of football towards that old normality, so longed for.

The game started with a score. The two teams measuring each other, with intense pressure, even aggressive, and Atlético biting more through Dituro’s area. But, as the minutes passed without chances, Celta did not lose order, increasingly bothering the rojiblanco movement. Coudet had come out with two of his new faces (Galán and Dituro), Simeone without any, drawn 5-3-2, Llorente on the right and Carrasco at the top, with Kondogbia by surprise, De Paul on the bench and, as the only ‘signing’, Saúl in the left lane, which continues, who has not yet left and may be in the band that incorporation that Cholo needs. If you let it, if you want. Yesterday it did.

As Correa. From his right booty came the first shot between the three sticks of the match that flew towards Dituro’s goal like an enraged horn. Hermoso had stolen the ball, Lemar had driven it, setting, breaking lines, assisting. Correa’s shoe slipped through the goalkeeper’s squad exploding the entire Celta fight.

The scoring was over. If Celta only had one chance in the first half, a shot from Aspas’s mother, without an angle, into Oblak’s gloves, Atlético was already in the Dituro area without the squeamishness of a visitor. Aspas took a shot from Hermoso under sticks, Carrasco sent another ball from a capital Lemar to the body of a rival, undetectable inside, disarming with each step. The oxygen was put by Kondogbia, a wall and an octopus, huge. The game clock was at his feet.

⚽ Atlético de Madrid’s victory in Vigo
👼 The champion beat the Celtic team in Balaídos with 2 goals from Correa
🧙‍♂️ Iago Aspas, from a penalty, scored the only goal for the Galician team https://t.co/jjBGeiTLr3

The second part continued as if the booth had not passed. The dominating Atlético, the Celta with a fight but the need for more cement. But, then, Aspas found himself at that point that he likes so much: the penalty against Oblak. Munuera Montero had spent a couple of minutes in front of the screen. The VAR had called the referee to whisper in his ear his doubts about Llorente’s hand in the area. An Aspas ball had bounced off his chest and then into his hand, without apparent intention. But the arbiters’ designs remain inexplicable no matter how much they try to explain them. He whistled it. Aspas marked it. Five minutes would hurt the shot only to Cholo. That Correa was still on the grass. And he would punish without forgiveness another loss for Celta.

Saúl through. A Saul who fell inside and destabilized, a Saúl from less to more, a Saúl who started the play and decided it with a pass. The ball had not reached the bottom of the net and Koke was already running, like a madman, captain mode, to hug him. How much I needed something like that on the 8th. Believe, grow, scare away so much shadow from last season.

The Celta would turn over on Oblak, desperately and behind the backs of Aspas who, inexplicably, sent out what always goes inside. The bullets hissed over the Slovenian without touching him. On the grass and Suárez, back, and De Paul, for the first time, and so much accumulated struggle, that a stomp from Mallo to Suárez in the seven minutes of addition unleashed the tangana. There were shoves, fingers in eyes, red for Hermoso and Mallo. And rain of yellow. The last one was for Giménez, a second after Kondogbia deflected a shot from Aspas with his head., two before Giménez himself drew another on the line when the clock was around one hundred. The end came in the middle of the fight. And Atlético picking up their crown from the dressing room as it was, still without blemish.