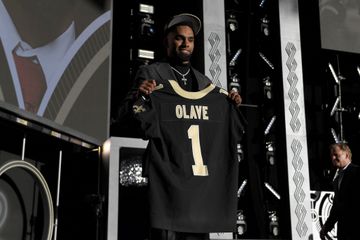 Five wide receivers and four defensive backs are featured in our second installment of your team’s best pick on the Draft 2022 of the NFL.

We continue in strict alphabetical order, from las vegas raiders until the Washington Commanders.

The Raiders only had six picks in this Draft, but in the fifth round they found Butler, who gives them depth in the front. He can play tackle or end. His last season with the Volunteers was his best statistically, with 8.5 backfield tackles and 5 sacks. He will start training camp as a second team player, but could soon earn more time on the field.

Johnson is the last piece of a rebuilt Chargers offensive line (tackle Rashawn Slater was selected in the first round of the 2021 Draft), which will not only help protect Justin Herbert more and better, but also consolidate the running game. Zion is projected to be the starting right guard since the preseason.

The champions had their first selection until the third round and none of his rookies look ready to start in September. In Durant’s case, he will compete with Troy Hill from training camp to play the slot.

Similar case to the Rams: his first draft pick went as far as the third round And that means hardly any of his rookies will start when the regular season starts. Tindall appears on the depth chart behind Elandon Roberts, third on the team in 2021 with 83 tackles.

Booth is one of two rookie defensive backs who could start for the Vikings. since the preseason. The other is safety Lewis Cine (Georgia, first round, pick 32). Booth, whose style of play is aggressive, will have the luxury of learning from veteran Patrick Peterson, who for many years was the best at cornerback.

Bill Belichick probably did steal the Draft with guard Cole Strange in the first round, but if that’s not the case, then Jones could be the pick we all remember in the Patriots’ 2022 Draft. New England’s backcourt is no longer one of the best in the league and will enter training camp with cornerbacks Malcolm Butler, Jonathan Jones and Terrance Mitchell, so Jones will have a chance to compete and buy time on the field.

No one knows in what form Michael Thomas will return, but even the most optimistic knows that his days in New Orleans are numbered, so recruiting a wide receiver was almost a must. Olave (2,702 yards and 35 touchdowns in four years with the Buckeyes) adds speed and verticality to the Saints’ offense.

Of course end Kayvon Thibodeaux (5th overall pick) is an immediate impact player, but Flott is a cornerback who could also start the regular season, on the opposite side of Adoree’ Jackson. Flott will compete for that starting job in training camp with Darnay Holmes.

The Jets did a terrific job in the Draft by recruiting at least four new starters, including Hall, the first running back drafted in 2022. Hall is a complete back who can also serve as another target for Zach Wilson in the passing game. In three years with the Cyclones he had 3,941 yards (average 5.5 per attempt) and 50 rushing touchdowns. He added 82 receptions, 734 yards and 6 touchdowns.

It is likely that Dean have to wait to be considered a starter in Jonathan Gannon’s defense, but this Bulldog can do it all: defend the run, pressure the quarterback or fall back in coverage. His senior year at Georgia was spectacular, with 10.5 backfield tackles, 6 sacks, 2 interceptions and 2 forced fumbles.

Fans will want to see Kenny Pickett as the starter right away, but that process will take time, unless Mitchell Trubisky gets hurt. So our choice here is Pickens, who could start from the slot. Pickens injured knee ligaments in the preseason and was never 100% in his final season with the Bulldogs. If the knee isn’t an issue, then the Steelers will have an excellent wide receiver corps, with Pickens and veterans Diontae Johnson and Chase Claypool.

The days of Deebo Samuel in San Francisco they seem numbered, so Gray might get his chance sooner rather than later. In his second and final year with the Mustangs, Gray had 49 receptions, 803 yards (average 16.4 per catch), and 9 touchdowns. He doesn’t have Deebo’s versatility, but this guy just makes big plays.

The Seahawks had a solid Draft and in the three days of recruiting they found at least four starters, including tackles Charles Cross and Abraham Lucas, new mainstays on the offensive line. However, our pick is Boye, who could be used as a defensive end in Clint Hurtt’s scheme. His career with the Golden Gophers went from low to high and in his fourth year he finished with 10 tackles for loss of yards and 7 sacks.

The Bucs needed help up front and with their first pick in the Draft they selected Hall, who is projected to start out of training camp, alongside Vita Vea and William Gholston in Tampa Bay’s 3-4 defense. Hall had a solid senior year with the Cougars, with 13 backfield tackles and 6 quarterback sacks. Under Todd Bowles, Kacy Rodgers and Larry Foote, this kid could be a candidate for Defensive Rookie of the Year.

The Titans surprised in the Draft by sending AJ Brown to Philadelphia, but they immediately recruited whoever they think can take their place. Burks can do everything Brown did in Tennessee and a little more, since he was kind of like Deebo Samuel of the Razorbacks. In his last season he totaled 66 receptions, 1,104 yards and 11 touchdowns, in addition to 112 yards and another touchdown on the ground.

Carson Wentz had to be given more weapons and therefore recruiting a wide receiver was a must. Dotson is ideal to complement Terry McLaurin, who has produced despite the carousel of quarterbacks in Washington. Dotson closed out his four-year career with the Nittany Lions with a season of 91 receptions, 1,182 yards and 12 touchdowns. More than acceptable numbers for a WR2 in the NFL.