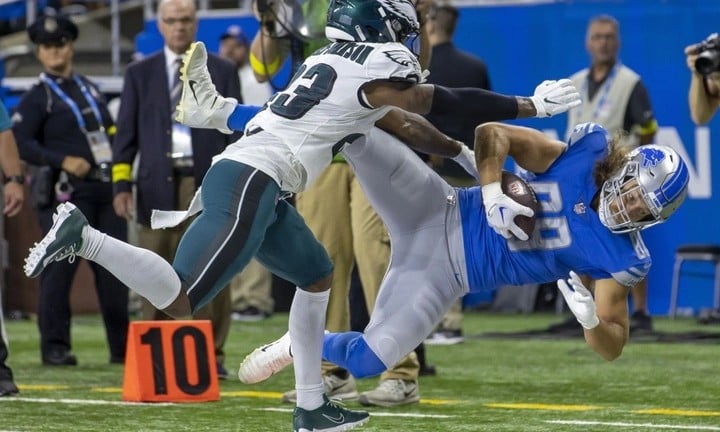 End of week 6 NFLthere is only one undefeated team that remains undefeated so far this season: the philadelphia eagles. In his second season as the team’s head coach, Nick Sirianni has raised the performance of his players, strengthened his roster and continues to search for a system that is increasingly tailored to his quarterback.

They began their season with a shootout in Detroit, coming out with a 3-point victory over the Lions, dominating the Vikings at home and the Commanders on the road. They had even duels with the Jacksonville Jaguars and the Arizona Cardinals, but in both they took the victory, and this Sunday night with their defense they dominated the Dallas Cowboys.

CJ Gardner-Johnson, key acquisition in the defense of the Eagles

Are the Eagles as much of a contender as the Bills, or the Chiefs? For that they must show what they are made of when the time comes. Last season they were thrashed 31-15 by the Tampa Bay Buccaneers in the Wild Card Round. of the Playoffs in the National Conference. Now they’ve added key pieces to their team, like receiver AJ Brown of the Tennessee Titans and cornerback CJ Gardner-Jhonson of the New Orleans Saints, and appear ready to go all out.

Gameday 6 of the NFL kicked off Thursday night in Chicago, where the Bears lost 7-12 to the Washington Commanders. An unattractive game between two franchises that have not been successful in recent seasons and this season their course does not seem to change direction.

Justin Fields, quarterback of the local team, showed a lot of confidence in his athletic abilities and less in his arm, which is why on many occasions he ends up running the ball instead of holding it in the protection bag to make a better reading and throw a good pass. . The 11th pick in the 2021 draft threw for 190 yards, 1 touchdown and 1 interception, in addition to rushing for 88.

On the Commanders’ side they have a more experienced quarterback in Carson Wentz, a former Eagles and Colt, who knows how to time games. Wentz connected with only 12 passes for 99 yards, on a night in which they based their attack on the ground with the duo between Brian Robinson who rushed for 60 yards and 1 touchdown and Antonio Gibson who reached 35.

On Sunday, the day on which the bulk of the games are played, it began with the victory of the New York Giants over the Baltimore Ravens 24-20.. Brian Daboll, the new head coach of the Giants, changed the culture and mood of the New York team that now sits second in the NFC East Division, with an unexpected but deserved 5-1 record.

Daniel Jones seems to have left behind the rookie mistakes he had repeatedly made in past seasons and this year he has already closed 3 games with a winning drive, a formula he repeated this Sunday against the Ravens, the quarterback threw for 173 yards and 2 touchdowns. Along with star running back Saquon Barkley, who had 22 carries for 88 yards and 1 touchdown, they are the hallmarks of a Giants offense that suffers from a low level at receiver.

Simultaneously, the great victory of the New England Patriots by 15-38 in their visit to the Cleveland Browns took place. The head coach of the Pats, perhaps the best of all time, Bill Belichick knows how to neutralize the virtue of a team and this Sunday he denied the local play the ground game, his specialty, with the duo of running backs Nick Chubb and Kareem Hunt with whom between the two they accumulated only 68 yards. They forced quarterback Jacoby Brisett to throw 45 passes of which he only completed 21 for 1 touchdown and 2 interceptions.

On the Patriots’ offense, backup quarterback Bailey Zappe remains strong and this Sunday he threw for 309 yards and 2 touchdowns. Also, the New Englanders appear to have found a gem in young Rhamondre Stevenson, a second-year running back who elevated the team’s running game and rushed for 76 yards and 2 touchdowns at Cleveland.

The surprise of the week was in the victory of the Pittsburgh Steelers against the Tampa Bay Buccaneers by 20-18. At home, the Steelers became strong defensively and gave Tom Brady an ordeal on Sunday afternoon, who pressed and managed to throw for 243 yards and 1 touchdown, but was seen yelling at his offensive linemen for poor coverage during the game.

On the home team’s offense, Kenny Pickett, who had been playing a good game with 67 yards and his first touchdown pass in the league, had to leave due to a concussion. Mitch Turbisky entered his replacement, who had been seated the previous week due to his poor performance, but his level was better this match and he managed to win against the Bucs with 144 yards and 1 touchdown through the air. .

Another of the surprises of the week occurred in Atlanta, where the Falcons beat the San Francisco 49ers 28-14. The Falcons, who were thought to be one of the worst teams of the season, gave Marcus Mariota, the former Tennessee Titan, a chance, and the quarterback is proving that he is still a starter in this league. With a performance worthy of fighting the best of the week, the Oregon alumnus missed a single pass, threw for 129 yards, 2 touchdowns and also added one on the ground.

Now both teams meet with a 3-3 record and tie for first place in their respective division. Those from San Francisco are equal with the Los Angeles Rams and Seattle Seahawks in the Western Division couple of the National Conference and the Atlanta Falcons are paired with Tom Brady’s Tampa Bay Buccaneers in the Southern Conference of the National.

The Philadelphia Eagles remain the only undefeated player in the NFL after beating the Dallas Cowboys 26-17 on Sunday night. The Eagles are advancing to a 6-0 record and remain undefeated so far this season, with Jalen Hurts at quarterback raising the bar for his teammates and understanding that he won’t always be the one to win the game. match. In the NFC East divisional matchup against Dallas, he threw for 115 yards and 2 touchdowns.

The Eagles’ defense is at an outstanding level, this Sunday night they forced three interceptions on the visiting quarterback and left him with a 28.8 QB (quarterback) rating. Two of the interceptions were at the hands of CJ Gardner-Johnson, the former New Orleans Saints cornerback or nickel who arrived in Philadelphia this preseason, has already adapted to the new system and generates value for the Eagles’ defense, the other interception was cornerback Darius Slay.

With this loss the Cowboys end the streak of 4 consecutive wins with Cooper Rush as starting quarterback, after Dak Prescott broke his right thumb, who plans to return this week against the Detroit Lions. An adventure with unimaginable results for those from Dallas, who even took a victory for Los Angeles against the defending champions, the Rams.

Week 6 of the NFL ended this Monday night, with the Los Angeles Chargers 19-16 win over the Denver Broncos. A tight and erratic match, where both teams had difficulties to put points on the scoreboard and had to go into extra time to finish the match. Denver has lost all three of its road games so far this season, in Seattle, Las Vegas and this Monday in Los Angeles.

Chargers quarterback Justin Herbert threw for 238 yards and an interception. With 57 pass attempts, he became the first quarterback in history to throw the most passes in a game with none for touchdowns, but still come away with the win. The one who is recovering the level is Austin Ekeler, the running back who had a great year last season and is slowly getting back on his feet, 4 touchdowns in the last three games, one of them against the Broncos.

Worrying is not enough, for what they are living in Denver with Russell Wilson. The quarterback who came over from Seattle to turn the Broncos into Super Bowl contenders, but who are barely winning at the moment. This Sunday night the team managed just 13 first downs. A team with a new quarterback and new head coach, Nathaniel Hackett, is often slow to oil the pieces in its gear, but for all the talent in Denver the results should start to change because patience is wearing thin.

performance of the week

Mahomes – Allen is a matchup we all want to see in the postseason, player of the week number four and Buffalo are a show apart, they already showed it in the American Conference finals last year, when Mahomes took the victory of an epic duel that ended in overtime. This Sunday, Allen returned to Kansas City with a thirst for revenge and unwrapped with a great game.

The Buffalo Bills defeated the Chiefs 24-20 in a game that involved two of the best teams in the league, due to the management of the game Josh Allen was chosen player of the week, he had a great performance and courage during the play.In addition, he left us with this little gem: the jump to Justin Reid, defensive back for the Chiefs.

Drafted with the 7th pick in the 2018 Draft, this Sunday afternoon he threw for 329 yards and 3 touchdowns, in addition to rushing for another 32. He focused on his main weapon, the excellent receiver with whom he makes up the best quarterback duo- receiver of the league, Steffon Diggs who in 10 receptions eclipsed the 148 yards and also had a touchdown. Allen also sent a touchdown pass to Gabe Davis and another to Dawson Knox.

Player of the week on matchday 6, Josh Allen

Entering week 7, the Buffalo team is first in the Eastern Division of the American Conference with a 5-1 record, that defeat that the Miami Dolphins gave them, who still had their starting quarterback, Tua Tagovailoa suffered a blow that rocked the NFL in Week 4. Next Sunday night they will have a duel when they host Aaron Rodgers’ Green Bay Packers.

The best of the sixth day of the NFL: are the Eagles for real?