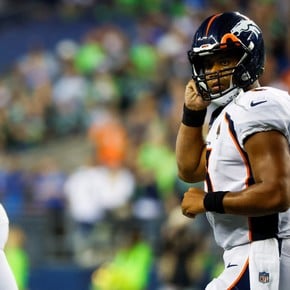 This Monday after the double billboard of games that they offered us, first between the Buffalo Bills and the Tennessee Titans, and in the second round the Philadelphia Eagles and the Minnesota Vikings, we end the second day of the NFL. A week in which several teams were able to turn adverse markers around to win.

The second date of the season began with a great match in what was the visit of the Los Angeles Chargers to the Kansas City Chiefs at Arrowhead Stadium. The offense of Patrick Mahomes and his head coach Andy Reid had a discreet day but in which they knew how to limit their errors so as not to give the ball to the visit.

The game ended with a tight 27-24 in favor of the local team, which won a very important victory in a divisional duel. With two teams that have playoff aspirations, this victory for the Chiefs could be very important in a hard-fought Western Division of the American Conference that, together with these two teams, completes the Denver Broncos and Las Vegas Raiders.

Already started on Sunday, the day in which the bulk of the date is played with 13 games, there was much to highlight. In the first turn, the New England Patriots took a great victory over Pittsburgh by 14-17 in a more than defensive duelthe Steelers suffered from the ghosts of the past that haunt their new quarterback Mitchell Trubisky, the former Bears player continues with his discreet game and this Sunday he threw for 168 yards, 1 touchdown and 1 interception.

The first comeback, and one of the best, came in Cleveland. The Browns hosted the New York Jets and already with the game in the mouth, they wasted the opportunity to start the campaign with two wins and zero losses after 29 years, a streak that is still waiting for the team that still does not have its starting quarterback available due to sexual harassment scandals.

With 90 seconds left on the game clock, veteran Joe Flacco led two relentless drives and scored 14 points to turn the score around and take the game 30-31. The quarterback, a Super Bowl champion with the Ravens in 2012, had 307 yards and 4 touchdown passes.

Another low-point game was between the New Orleans Saints and the Tampa Bay Buccaneers. In his visit to Caesars Superdome, Tom Brady managed to take his first victory 10-20 in the regular season against a Saints who had 5 turnovers, 3 interceptions thrown by Jameis Winston and 2 fumbles.

The game opened in the last quarter where the visitors scored 17 points and the locals could only respond with a touchdown. This rivalry, which is on the verge of candy, sparked into a fight in which Bucs offensive player Mike Evans and Saints cornerback Marshon Lattimore were involved, the receiver will be suspended one date for misconduct.

The disappointment of the week was the Indianapolis Colts, who on their visit to Jacksonville were shut out in a 24-0 loss to the Jaguars. Matt Ryan seemed oblivious to the player who won league MVP in 2016 and threw for 195 yards and 3 interceptions.

The key to the match was on the defensive side for the winning team. They allowed just 63 total yards to Jonathan Taylor, who is coming off an All-Pro last season, and converted just 9 first downs. Trevor Lawrence, a quarterback who was drafted with the first pick in the draft in 2021 by Jacksonville, had a good performance with 235 passing yards and 2 touchdowns.

Another of the performances that fought to be the best of the week along with that of Joe Flacco, was that of Amon-Ra St Brown. The Detroit Lions receiver accumulated 184 total yards and received 2 touchdown passes in what was a 36-27 victory for his team against the Washington Commanders.

Sunday night closed with the greatest rivalry throughout the league. The Chicago Bears traveled to Green Bay to play the 205th match between the two. The Packers became strong at home and beat the visiting team 27-10 to get their first win of the season and extend their lead by 9 games.

Aaron Rodgers threw for 234 yards and 2 touchdowns, but leaned on a running game that had an inspired Aaron Jones with 132 yards and 1 touchdown on 15 carries. On the Bears side, they will have to improve their aerial attack to be able to compete, their quarterback Justin Fields threw for only 70 yards and 1 interception.

Week 2 of the NFL closed with two simultaneous games on Monday night, a doubleheader that we are not used to. First the Tennessee Titans were torn to pieces on their visit to Buffalo 41-7, the Bills showed no mercy and did not take their foot off the accelerator.

Home team quarterback Josh Allen threw for 317 yards and 4 touchdowns, of which 3 were received by Stefon Diggs, who also had 148 yards on 12 receptions. A duo that has the potential to be the best in the league.

At the same time, the Minnesota Vikings failed to gain a foothold in Philadelphia and were vastly outscored 24-7.. Vikings quarterback Kirk Cousins ​​had nightmares all night about cornerback Darius Slay intercepting him twice and barely allowing Cousins ​​to connect with his favorite receiver and one of the best in the NFL, Justin Jefferson .

performance of the week

This time the spotlight is on Miami! Tua Tagovailoa shone when his team needed him most and managed to lead an incredible comeback for the Dolphins, They thus managed to win the match 38-42 against the Baltimore Ravens who had an inspired Lamar Jackson.

Tua Tagovailoa of the Miami Dolphins

In what was a 31-14 blowout of the locals at the M&T Bank Sadium in Baltimore, the fourth quarter turned into a movie for the quarterback who graduated from the University of Alabama. In just the last 15 minutes of the game, the Miami team scored 28 points and conceded only 3, to carry out a fascinating comeback. New coach Mike MCDaniel was able to exploit his offensive talents and got Jaylen Waddle and Tyreek Hill, perhaps the two fastest players in the league, to combine for 361 yards and 4 touchdowns.

A real shootout, in which both quarterbacks had great games and accumulated huge numbers. Lamar Jackson, who is in the final year of his contract with the Ravens, threw for 318 yards and 3 touchdowns, along with rushing for 119 and scoring once on the ground. Even so, he couldn’t beat the Dolphins quarterback, who took the performance of the week after throwing for 469 yards, 6 touchdowns and 2 interceptions. On Sunday afternoon Tua will have a tough challenge in Miami, when they host the top contenders for the title this year, the Buffalo Bills.

The best of the second date of the NFL: the week of comebacks