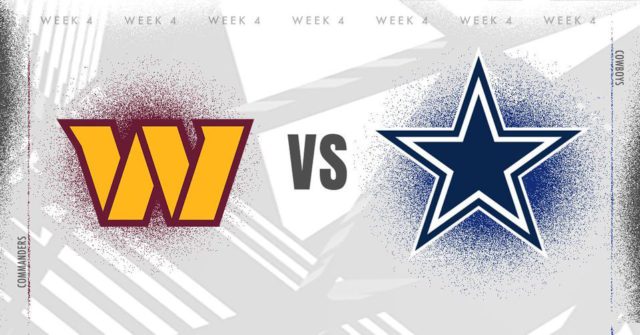 This Sunday, the Dallas Cowboys and the Washington Commanders will meet in the first division duel between the two of the season. In fact, it will be the first of the capital team with its new name. And that’s not all, but it will also mark the reunion of quarterback Carson Wentz against the cowboy team. Without a doubt, these are striking ingredients for this new chapter in the rivalry between the two franchises.

And it is that, throughout history, Dallas and Washington have starred in one of the most iconic rivalries in the NFL. That is why, below, we will review the highlights of the clashes between these teams.

Cowboys vs Commanders: General data and origin of the rivalry

In total, Dallas and Washington have met 124 times, of which two of them were in the postseason with a victory for the capital. The lifetime series between the two teams is dominated by the Cowboys with 75 wins to the Commanders’ 45 and two ties.

It is worth mentioning that the rivalry between the two franchises dates back to before the founding of the Cowboys in 1960. This is due to the friction between Clint Murchinson Jr., founding magnate of the Cowboys, and George Preston Marshall, owner of the then Washington Redskins. . These frictions are due to the failed purchase of the Redskins by Murchinson in 1958, this due to a change of terms by Marshall.

At the time, Murchinson was interested in bringing an NFL team to the city of Dallas. After not being able to buy any franchise, the tycoon decided to create a new team. And while Marshall was the only NFL owner to oppose the proposition, Murchinson had an ace up his sleeve: the rights to the Redskins’ war song, which were sold to him by the team’s band director as ” revenge” towards Marshall for an altercation they had.

In this way, Clint Murchinson Jr. offered George Preston Marshall a deal: return the Redskins song in exchange for his approval to create an NFL franchise. Marshall agreed, and the Cowboys were founded in 1960, the year they started playing.

Cowboys founding owner Clint Murchison Jr. bought the rights to the song ‘Hail to the Redskins’ for $2,500 and forbade the team from playing it unless then-Washington owner George Preston Marshall withdrew his opposition to the Dallas franchise https://t.co/JgivI7Qxi7 two/

Most outstanding duels between Dallas and Washington

Season 1960: First game between both

The first game in history between the Cowboys against the then Redskins took place in 1960, the debut year of the cowboy team in the NFL. Held on October 9 of that year at Griffith Stadium, the game would end with a 26-14 victory for Washington.

Despite the aforementioned non-sports background, the rivalry between Dallas and Washington was not exciting at first. In fact, that game was the only game the Redskins won that season, going 1-9-1. Meanwhile, the Cowboys finished their first NFL season winless, going 0-11-1.

The rivalry would go to another level in the following decade, in the first postseason duel between the two. This took place in the final of the National Conference of 1972, played on December 31 of that year. That game ended in total dominance by the Redskins, fueled by 146 receiving yards and two touchdowns by receiver Charley Taylor.

It is worth mentioning that, in that campaign, the Cowboys were the defending champions of the NFL. Meanwhile, the Redskins reached their second consecutive playoffs after a 25-year absence. Although Washington made it to the Super Bowl, it would end up falling to the undefeated Miami Dolphins in the big game.

The 1974 Thanksgiving Day game between Dallas and Washington is a favorite of nostalgic cowboy fans, and for good reason. The Redskins came into that game ready to secure their playoff berth. However, this game had an incredible turn of events.

Five minutes into the third quarter, Washington was winning the match 16-3. Also, linebacker Dave Robinson caused cowboy quarterback Roger Staubach to leave due to a hit. This prompted then-rookie Clint Longley to take over the Dallas offense, suggesting the game was over.

However, Longley surprised by leading Dallas to victory after an impressive comeback. This was capped off by a 50-yard touchdown pass to Drew Pearson with just 28 seconds left in the game. Without a doubt, a memorable game.

In the final game of the 1979 regular season, the NFC East divisional title was on the line between the Cowboys and Washington. A loss had different implications: For Dallas it meant qualifying as the second wild card, while Washington could miss out on the postseason. The table was served.

That day, Texas Stadium witnessed one of the biggest comebacks led by quarterback Roger Staubach. Both the Cowboys and Redskins traded dominance on the scoreboard during the game. However, two touchdowns in the final five minutes set up the victory for Dallas, sealed by Staubach’s pass to wide receiver Tony Hill in the final minute of the game.

The second and final postseason game between Dallas and Washington (until now) took place in the 1982 NFC final. This game ended in a 31-17 victory for the Washingtonians, led by running back John Riggins with 140 rushing yards. and two annotations. A turning point in this game was the departure of cowboy quarterback Danny White, this after taking a hit from defensive end Dexter Manley late in the first half.

It’s worth mentioning that this matchup was the Cowboys’ fifth appearance in the NFC championship game in six years. Meanwhile, the Redskins would win the Super Bowl that season against the Miami Dolphins.

Since that conference final, the subsequent duels between Dallas and Washington usually left punctual anecdotes about plays, bulky markers and others. However, one of the most remembered matchups in recent times is the Thanksgiving game of the 2012 season. Mind you: This is not a fond memory for Dallas.

That meeting is remembered mostly for the performance of quarterback Robert Griffin III. The then rookie from Washington completed 19 of 27 passes, throwing for 304 yards and four touchdowns. Meanwhile, the rival defense sacked Tony Romo three times and intercepted two of his passes. This meeting marked the Cowboys’ first loss to the Redskins on Thanksgiving, this after five wins in the previous meetings.

Finally, we have the last meeting between both franchises to date. This took place at AT&T Stadium, in week 16 of the 2021 season.

The Cowboys entered this matchup with the NFC East division title secured, while Washington still had hopes of making the playoffs. However, Dallas gave a 56-14 blowout to their divisional rivals, in a great game together for the cowboy team.

It is worth mentioning that this meeting was the fourth (and last) of Dallas against the then called Washington Football Team. The capital team had that temporary name between 2020 and 2021 after being forced to stop being called Redskins due to racial controversies. During this span, the series was level 2-2. Interestingly, Dak Prescott did not know defeat against the Football Team, winning both games against them in 2021.

The Cowboys are CLOWNING Washington pic.twitter.com/sGE5Jt9xgV

Now, the Cowboys will face Washington for the first time since they were renamed the Commanders earlier this year. In theory, the Cowboys are favorites after rival quarterback Carson Wentz was sacked nine times in Week 3 against the Eagles. If Dallas puts up a solid performance on both sides of the ball, it would mean another win that would leave them 3-1.

#TBT: History of the rivalry between Cowboys and Commanders