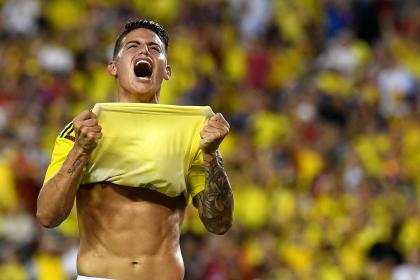 Twitch has become James Rodríguez’s favorite platform to have a good time with friends and to converse in a certain way with his followers.

This Friday, the cucuteño went back to doing a live show after months. He did not play any video game but took the opportunity to reveal the occasional intimacy regarding his future in clubs and the difficult situation in Selección Colombia.

Precisely about the team that Reinaldo Rueda currently leads, James preferred not to give more details about his return to a call-up and chose instead to make a controversial promise.

It is worth remembering that the problems between the 10th and the national team began in June, when Rueda disaffected him from the double round of Qualifiers and the Copa América for not being physically well. Since then, Rodríguez Rubio has declared in different media that he does not know if he will return to the selected team, he has said that he has future plans, in short … There does not seem to be any approach, the wound is still open.

Words that continue to cast doubt on his participation in the qualifying rounds that are coming and the World Cup next year.

He also spoke about Luis Díaz’s performance in the Cup and applauded the new talents that are emerging: “How I saw Lucho Díaz in the Cup, very good. Scoring four goals in so few games is super complicated and it is good that players like this come out for the future of Colombian football and we hope that many more players like that come out. I am very happy for him, he made a very good Cup and we hope he continues on that good path ”.

The Guajiro winger was the great revelation of the South American tournament and even shared the scorer title with Lionel Messi, of course he scored his four goals in fewer minutes.

Finally, and as he said at the time that he did not need to post messages to show his support, James claimed to be the biggest fan of the National Team.

“Of course, always wishing well to my teammates, to the Colombian National Team, so that I can go to a World Cup and always do well. I am one more fan, I am a huge fan of the National Team, those who know me know that it is so, I am a fan but faithful. Always wishing you well”.