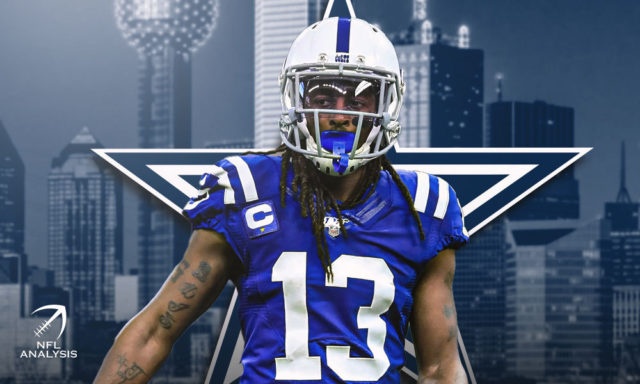 Despite all the noise surrounding the possible signing of Odell Beckham Jr., the Cowboys had a clear need: an experienced receiver who could contribute immediately. After realizing that OBJ was not physically fit to play this month, Dallas was expected not to bolster its receiving corps. However, the cowboy team began the week with a surprise signing.

This Monday, the Cowboys announced the addition of receiver TY Hilton, who arrives as a free agent and signs for one year. According to reports, the former Colts player had a visit with the cowboy team this Monday, passing the physical tests and immediately convincing him to hire him.

The #Cowboys are securing veteran WR help after all, signing long-time #Colts star TY Hilton, his agents @KatzBrosSports tell me and @rapsheet. He had a visit and workout with the team today and should provide help down the stretch and in the playoffs.

With the arrival of Hilton, Dallas adds an experienced receiver who can contribute immediately. In fact, the 33-year-old player is in optimal condition after training during these months that he has been without a team. Even, Hilton could debut this Sunday against the Jacksonville Jaguars.

However, his potential debut this weekend will depend on what happens during practice this week. This is how Mike McCarthy, head coach of the Cowboys, let it be seen during a press conference this Monday afternoon.

“It’s a great addition”McCarthy said of the addition of Hilton. “Obviously he’s been training all year, so he’s in great shape medically. We’ll have him at practice on Wednesday for her to get acclimated. She had a workout (today). Everything passed with great success. The time is right. He is ready to play.”

Medically, Hilton “passed with flying colors” and is ready to go for McCarthy.

Coming to the NFL as a round 3 pick in the 2012 Draft, TY Hilton played for 10 seasons with the Colts. In his long tenure there, the FIU product earned four Pro Bowl selections. His best season as a professional was in 2016, in which he recorded 91 receptions for 1,448 yards and six touchdowns. In fact, he led in receiving yards that season.

However, Hilton’s offensive production has been on the decline in recent seasons. This was largely due to the retirement of quarterback Andrew Luck, with whom he had great chemistry. Besides, Hilton had some injury problems last season.

It’s worth noting that Hilton’s last 1,000-yard receiving season was in 2018, with 76 receptions for 1,270 yards and six touchdowns. Meanwhile, in 2021, the veteran receiver just had 23 receptions for 331 yards and three touchdowns. All this in ten games, nine of them as a starter.

Despite these factors and his age, TY Hilton can still be a valuable asset to the Cowboys’ offense. The former Colts player can bring seniority and experience to a fairly young receiving corps. Plus, he can form a triple threat alongside CeeDee Lamb and Michael Gallup.

But that is not all. As we mentioned, Hilton is physically fit to play immediately if possible. Besides, his contract until March 2023 is convenient for the Cowboys in terms of budget. These are conditions that were not met by Odell Beckham Jr., who is in no condition to play before the playoffs, apart from the fact that he was seeking a multiyear contract.

Without a doubt, the signing of TY Hilton was a rather surprising move by the Cowboys. However, this adequately bolsters the cowboy team at a key point in the season. It remains to be seen if the arrival of Hilton ends up benefiting Dallas. And not only that, but also if Jerry Jones will maintain his interest in Odell Beckham Jr., either for real or by continuing to grab headlines in the media.