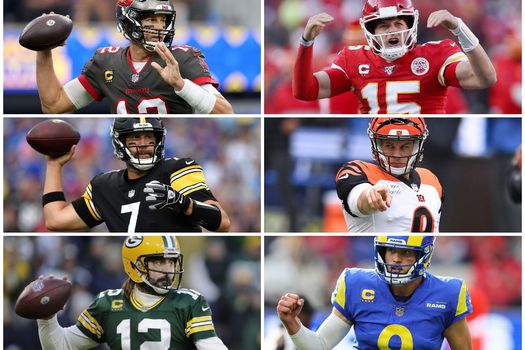 Nobody is eternal in the world. Not even Tom Brady, the best quarterback of all time. The winner of seven titles of the superbowl He announced his retirement two weeks ago, after 22 seasons in the NFL, the United States American Football League. Ben Roethlisberger also played his last game with the Pittsburgh Steelers in January, a team with which he was three-time champion, while Aaron Rogers, 38, is already evaluating his continuity with the Green Bay Packers, despite the fact that he was chosen 2021 MVP. Recently retired Eli Manning and Drew Bress, who made history with the New York Giants and New Orleans Saint, respectively.

Find out about all the sports news in El Espectador

And although since 2020 there has been talk of the generational change in the determining position of the sport that Americans are most passionate about and that little by little, thanks to a successful marketing and dissemination strategy, is gaining more followers in the world, only now does it seem an inescapable reality .

Without Brady, who at 44 years old maintained an impressive level, and Roethlisberger, who is far from his best, the conditions are ripe for Patrick Mahomes and company to take over. Next to the star of the Kansas City Chiefs are some rookies and others with some experience who promise to dominate the League in the next decade. Jimmy Garoppolo, of the San Francisco 49ers, and Josh Allen, of the Buffalo Bills, but also the two protagonists of Super Bowl 56, which is played this Sunday at SoFi Stadium in Inglewood (California), starting at 6:00 p.m. , with transmission by Star +, between Los Angeles Rams, commanded by Matthew Stafford Y Joe Burrow’s Cincinnati Bengals.

Super Bowl 56, time and where to watch it in Colombia

Mahomes, 26, is a versatile player like few others, a great passer both short and long, stopped or on the move, but he is also skillful and knows how to move and advance with the ball in his hands. Led by experienced manager Andy Reid, with whom he already won the Super Bowl two years ago, he has room to continue improving. And this is known by the directors of the Chiefs, who extended his contract until 2031 for about US $ 400 million.

One step away from glory

Today, though, all eyes are on the Bengals and Rams quarterbacks. Joe Burrow was a winner of the prestigious Heisman Trophy at the university level and in his second season in the NFL he unexpectedly reaches the Super Bowl after recovering from a rookie season interrupted by a delicate knee ligament injury.

This season, especially in the Finals, Burrow showed his rank by leading the Bengals to unexpected road wins over top seeds such as the Tennessee Titans and the mighty Kansas City Chiefs, who were looking to reach their third superbowl consecutive. Just two years ago the Bengals finished with a losing record of two wins and 14 losses.

In front you will have matthew stafford34, who came to the Rams last year after playing since 2009 for the Detroit Lions, with whom he only reached three postseasons.

His ability was never in doubt, nor was his leadership. Precisely for this reason he came to the rams, that they hired him to storm the crown that they only won in 2000 and that they lost in the super bowls of 1980, 2002 and 2019.

After having eliminated Tom Brady and their Buccaneers, and with the theoretical home-field advantage, the Rams are favorites. In addition to Staffordin their personal and sporting maturity, have two of the best receivers in the League: Cooper Kupp and Odell Beckham Jr.

The game will be played at the impressive SoFi Stadium, which was built between 2016 and 2020 at a cost of US$4.9 billion. It is estimated that this weekend profits of close to US$470 million will be generated throughout the state of California, which will receive some 150,000 visitors. The duel, complemented by shows from Eminem, Dr. Dre, Kendrick Lamar, Mary J. Blige and Snoop Dogg, will be seen live in 180 countries. Each 30-second television commercial costs $7 million. And the 70,240 tickets that were sold had an average cost of $7,237. Each member of the winning team superbowl will receive a prize close to US$145,000, while the losers will receive half.

Super Bowl and the generational change in the NFL