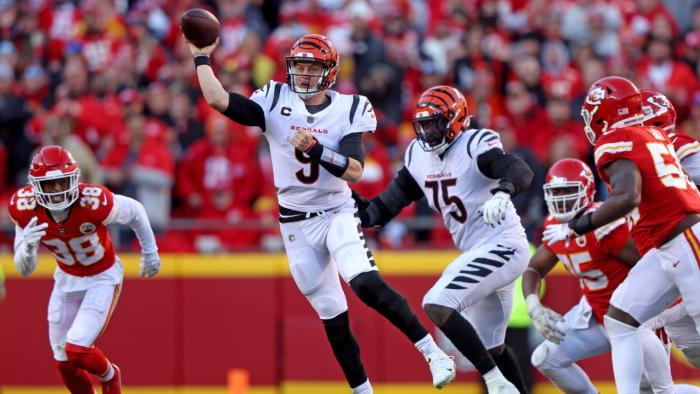 The Super Bowl LVI this Sunday February 13 between Los Angeles and Cincinnati (from 18:30 in Ecuador) will face two squads that contrast due to the seniority of the star players of the rams and the youth of the protagonists of the Bengals.

The age difference is marked from the quarterbacks. Rams quarterback matthew staffordfrom 33 yearsthird best in yards in the season, is an offensive leader with 12 years of experience in the NFL, 10 with the Detroit Lions and two with Los Angeles, who will seek to win their first superbowl.

His rival in the Bengals, Joe Burrowfrom 25 yearswas just beginning his college career at Ohio State in 2015 when Stafford was playing his fifth season with Detroit and already had experience from a couple of appearances in the playoffs.

Although Burrow is in her second season with Cincinnati, she is considered the NFL’s next big star.

National champion with the University of Louisiana and winner of the Heisman trophy as the best collegiate, Burrow has already led his team to the Division North title, the AFC championshipreceived the award for 2021 comeback player of the NFL and will now play the Super Bowl.

The duel of receivers will not be less interesting. In the Rams they have cooper kupp28, winner of the triple crown for the most catches, 145, the most yards, 1,947, and the most touchdowns, 16, in addition to being recognized as the Offensive Player of the Year.

The counterweight on the Bengals is called Ja’Marr Chase, 21, paradoxically the youngest on the team, designated Offensive Rookie of the Season; he was the fourth best receiver of the season with 1,455 yards and 13 touchdowns.

The Rams also have more experience than Cincinnati in the running game, albeit by only a year difference. austin ekler26, who had 911 yards for the year and 12 touchdowns, was surpassed by Joe Mixon, 25, third in the NFL with 1,205 yards and 13 touchdowns with the Bengals.

The Los Angeles defense has the lineman’s experience Aaron Donald, 30, a danger to opposing quarterbacks; he had 12.5 sacks on the season and caused four fumbles. This will be his second Super Bowl.

THE NUMBERS AND ‘THE MAIN COURSE’

The halftime showthe advertisements and the millions of dollars that the advertisements move play another game in the superbowl. The musical part of this year will have a lot of rap and hip-hop flavor. In total there will be five stars that will be presented for about 15 minutes, including Dr Dre, Snoop Dogg, Eminem, Mary J. Blige and Kendrick Lamar. As if this were not enough, the trailer for the Lord of the Rings series will be announced, while it has already been announced that for only a 15-second advertisement to appear, the brands will have to pay just over $ 3 million.

To Los Angeles, venue 2022, the game will leave revenue of $ 477 million, 92 million viewers they will see it on television and 1.4 billion chicken wings will be consumed. The cheapest ticket was over $4,000. The event will be broadcast on the Star + platform.

Super Bowl 2022, a battle between youth and experience