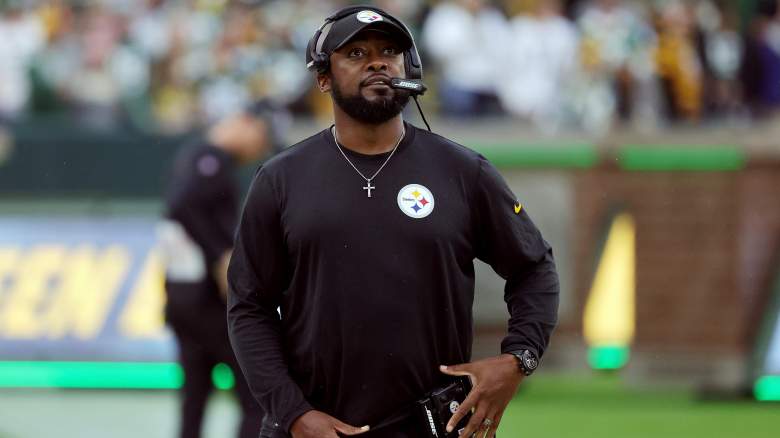 Apparently, the Pittsburgh Steelers are still on the hunt for a quarterback, and not just in the 2022 NFL draft.

According to Adam H. Beasley of Pro Football Network, the Steelers are “possibly interested” in Arizona Cardinals quarterback Kyler Murray. Murray is in the midst of trade rumors amid a contract dispute with the Cardinals.

However, as Beasley points out, the trade market would be huge for the 24-year-old quarterback. Beasley also mentions the Carolina Panthers, New Orleans Saints and Philadelphia Eagles as teams interested in making a play for Murray.

“Teams that could possibly have interest in Murray include the Carolina Panthers, Philadelphia Eagles, New Orleans Saints and Pittsburgh Steelers,” Beasley says. “It’s almost inconceivable to think that the Cardinals would trade Murray within the division, thus probably excluding the Seattle Seahawks.”

Why the Steelers make sense for Murray

The young dual-threat quarterback has spent the offseason trying to sign a new contract. Murray was absent for the Cardinals’ first day of spring training on Tuesday, April 19.

Clearly, the Steelers are still on the hunt for a quarterback, as they will enter the draft with just two players at the position: Mitch Trubisky and Mason Rudolph. Although both players have starting experience, neither quarterback spent the 2021 season as a starter.

The lack of established talent at quarterback has led many pundits to believe the Steelers will select a quarterback in the first round of the 2022 NFL draft. That being said, Pittsburgh would still have a gap in possession of an established quarterback after the draft.

As a quarterback coming off a playoff appearance, Murray would easily fill that void. Could the Steelers choose to trade their draft capital (they own the 20th pick in the draft) for a quarterback like Murray?

Jones: Murray will be out of Arizona

“I think he’s out of Arizona, I think someone is going to make a deal with the Arizona Cardinals to get Kyler Murray out of there and put him on a new team,” Jones said. “There’s just too much project capital and there are too many things that I don’t know if the organization wants to address. And even if you pay him, I see this happening again. I see some problems with Kyler Murray, ‘The list is not this’ or something can happen. I think we’ve seen the last of Kyler Murray in an Arizona Cardinals uniform.”

According to NFL Network’s Tom Pelissero, Murray is not expected to play again for the Cardinals until a new contract is agreed upon.

Despite Murray’s desire for a new contract, there have been no negotiations between the two sides yet. The Cardinals say they eventually want to extend Murray.

“The Cardinals have said they eventually want to extend Kyler Murray, and Murray recently said, ‘I’m really not too worried about my future as a Cardinal.’ But with two weeks to go until the draft, there are no negotiations and other teams are watching. A situation to monitor,” Pelissero reported on Thursday, April 14.

The Cardinals’ lack of urgency in even discussing a new deal with Murray, combined with the young quarterback’s frustration with his franchise, may lead to his departure.

That level of frustration could eventually lead to Murray being traded to another team like the Steelers.