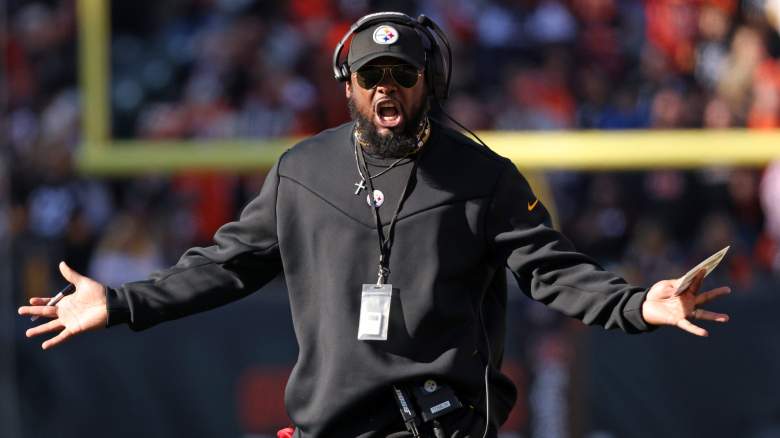 Getty The Steelers could add a fourth quarterback in Ryan Fitzpatrick.

The Pittsburgh Steelers could add another veteran quarterback to the locker room.

According to CBS Sports Radio’s Andrew Fillipponi, the Steelers could be looking to add another arm with their current group of quarterbacks. Fillipponi suggests Pittsburgh should pursue 17-year veteran Ryan Fitzpatrick, who remains a free agent after missing virtually the entire 2021 season due to a Week 1 hip injury.

“So the Steelers could now sign a veteran free agent quarterback to fill out their quarterback depth chart,” Fillipponi says. “I would give Ryan Fitzpatrick a chance. I think he is better than Trubisky. And he could help set up your rookie QB.”

Fitzpatrick may emerge as the Steelers’ best option

With the exception of Tom Brady, Fitzpatrick, along with Aaron Rodgers, would enter the 2022 season as the longest-playing quarterback. Fitzpatrick initially entered the NFL as a seventh-round draft pick by the Los Angeles Rams in 2005.

While Fitzpatrick has never led a team to the playoffs, he has carved out a career as a well-respected journeyman quarterback. The Harvard alum played and started for nine different teams in his career.

During his most recent full-season start, in 2019 with the Dolphins, Fitzpatrick posted an offensive rating of 76.5, according to Pro Football Focus. That number ranked 14th among all starting quarterbacks in the league that season.

The Steelers currently have returning Mason Rudolph and signed free agent Mitch Trubisky on their roster. By comparison, Rudolph posted a 53.5 offensive rating during his only season as a starter in 2019 and was benched by head coach Mike Tomlin in favor of undrafted free agent Devlin Hodges.

Meanwhile, Trubisky’s career offensive record is 66.4, which he posted during his rookie season with the Chicago Bears in 2017.

While much attention has been given to the idea that the Steelers will target a quarterback prospect in the first round of the 2022 NFL draft, that would leave Pittsburgh with just three quarterbacks on its roster.

As general manager Kevin Colbert said in February, the plan for the Steelers is to enter camp with four quarterbacks. It’s worth noting that Colbert says the Steelers will start the offseason with Rudolph as the starter.

“We know we’re going to increase the position,” Colbert said of the QB position. “I can’t tell you how right now. We will go to camp with four. If we were to start today with Mason as the starter, let’s go. We will try to build the best team around him.”

Assuming the Steelers select a quarterback early in the 2022 NFL draft, you’d think Pittsburgh would opt to sign another veteran quarterback as a fourth arm before training camp.

The Steelers will host Malik Willis for a visit

As the Steelers prepare for their first pick in the 2022 NFL draft, they welcome another highly touted quarterback prospect. As reported by NFL Network’s Ian Rapoport, the Steelers are hosting Malik Willis for a visit on Wednesday, April 20.

Many have projected Willis as the best quarterback prospect in this year’s draft. According to Ryan Wilson of CBS Sports, he has Willis projected as the No. 1 quarterback selected, going No. 9 for the Seattle Seahawks on draft day.

“We’ve been honest about Willis: We have a second-round rating on him based on his work in college, but that doesn’t mean teams looking for a quarterback won’t take one a round or so sooner than they should. . Wilson says.

If the Steelers hope to draft Willis, they may have to trade on draft day to move up in order to do so.