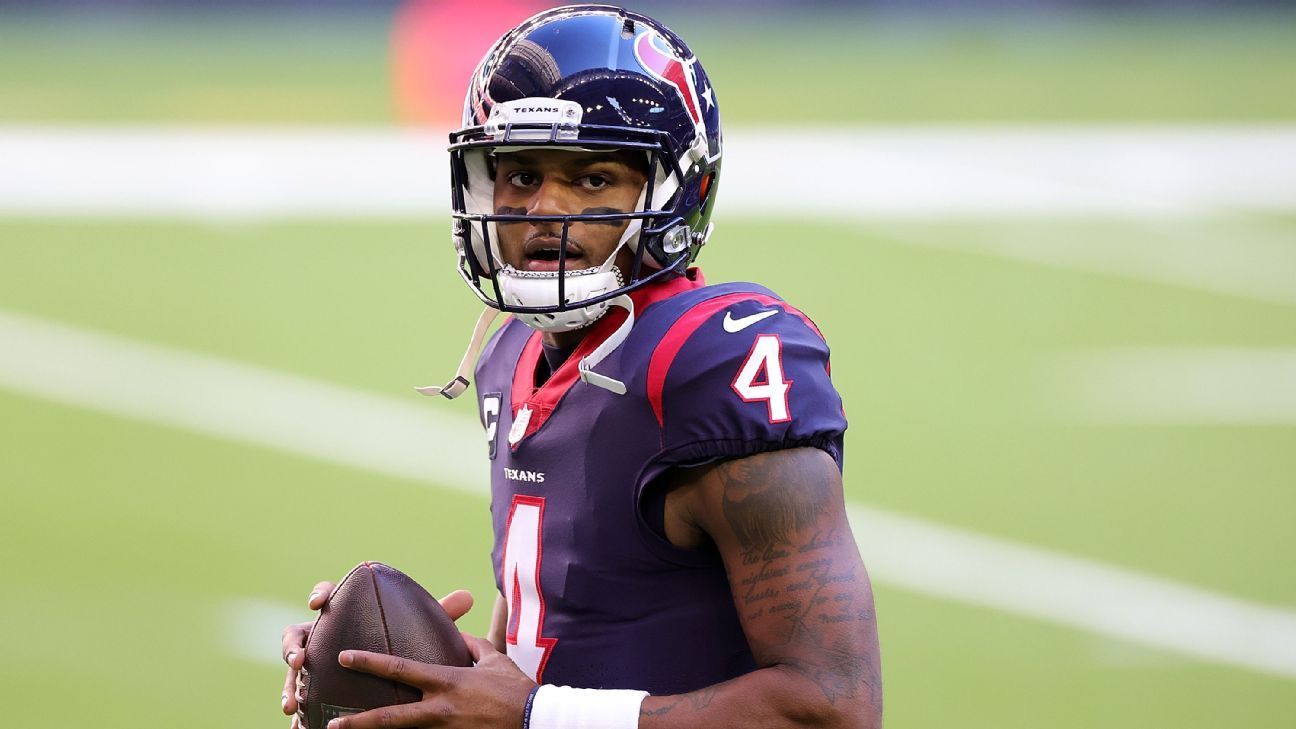 The Cleveland Browns have acquired quarterback Deshaun Watson in a trade with the Houston Texans for first-round picks in 2022, 2023 and 2024 as well as a 2023 third-round pick and a 2024 fourth-round pick.

The Browns are ready to give Watson a new five-year, $230 million contract, sources told ESPN’s Adam Schefter. He would receive $184 million over the first four years of his new deal – a $48 million raise over what he was scheduled to receive under his current contract.

The $230 million is fully guaranteed, setting a mark for the highest guarantee ever for an NFL player.

Watson will earn $1,035,000 in base salary in 2022, a source confirmed to ESPN. That’s the amount he stands to lose per game if Watson is suspended by the NFL over allegations of sexual abuse and sexual misconduct that have been made against the quarterback. NFL Network was the first to report Watson’s 2022 base salary.

Texans general manager Nick Caserio said in a statement Friday that he believed trading Watson “was the right move for our organization” as the team continues its rebuild.

“Our priority right now is to add talented players to the base that we’ve already established over the last 15 months and this trade supports that plan,” Caserio said. “As we navigate the rest of the offseason, we remain open-minded to all avenues that allow us to improve our roster and add to our program.”

The 26-year-old quarterback shared a instagram post showing himself in a Browns uniform and wrote, “Cleveland, LETSSSS GOOOO!! #DawgPound Ready To Work!” Watson’s move to the Browns opens up the possibility of quarterback Baker Mayfield finding a new team. Mayfield had requested a trade out of Cleveland, he told Schefter earlier this week, but a source had previously told ESPN’s Jake Trotter that the Browns would not accommodate that request.

The Browns — as well as the Carolina Panthers — had believed they were no longer a candidate to acquire Watson, who had also been considering joining the New Orleans Saints and Atlanta Falcons. Browns officials met with Watson Tuesday in Houston.

Watson did not play last season after an offseason request to be traded and the filing of 22 lawsuits against him alleging sexual abuse and sexual misconduct during massage sessions. But a Texas grand jury declined to indict Watson on criminal charges last Friday, signaling the end of criminal proceedings involving him in Harris County. Negotiations between the Texans and interested teams began soon after.

Before meeting with the Browns on Tuesday, Watson answered questions about two of the 22 lawsuits filed against him during ongoing depositions, the plaintiffs’ attorney, Tony Buzbee, told KHOU 11. Watson had filed for the fifth. amendment and his right against self-incrimination by sitting down for two deposition sessions that began Friday.

“I’m just going to keep fighting to rebuild my name and rebuild my appearance in the community,” Watson said Friday after the grand jury’s decision, speaking to reporters for the first time in more than a year.

Although he will not face criminal charges, Watson could still face an NFL sanction, and the 22 civil lawsuits against him remain active.

A spokesman for the NFL, which is investigating Watson under its personal conduct policy, said in a statement last Friday, “We have been closely monitoring all developments in the matter.”

Watson asked the Texans to trade him in January 2021, citing the process in Houston that was used to sign Caserio earlier that month. The first lawsuit against Watson was filed in March 2021, and he was a healthy inactive for all 17 games last season while earning his $10.54 million base salary.

A Pro Bowl selection three straight seasons before 2021, Watson joins a Browns offense that boasts one of the best running attacks in the league, led by Pro Bowl running back Nick Chubb. Cleveland has also traded to acquire Pro Bowl wide receiver Amari Cooper from the Dallas Cowboys.

Watson was selected in the first round of the 2017 NFL draft after the Texans traded with the Browns to move up to the No. 12 pick. Watson is scheduled to return to Houston in the 2022 season when the Browns visit the Texans. .

Mayfield, meanwhile, has endured a tumultuous, up-and-down time in Cleveland. He became just the third quarterback in NFL history to play for four coaches during his first three seasons in the league with the same team.

Mayfield improved to guide Cleveland to its first playoff win in 26 years during the 2020 season. But in Week 2 of last season, he suffered a labral tear in his non-dominant left shoulder and struggled the rest of the season. way. He finished 27th in the NFL in QB rating as the Browns went 8-9 and missed the playoffs.

Mayfield had surgery to repair the labrum on Jan. 19 and is expected to be given the green light well before training camp. He is entering the final year of his rookie deal, which will pay him $19 million in 2022.