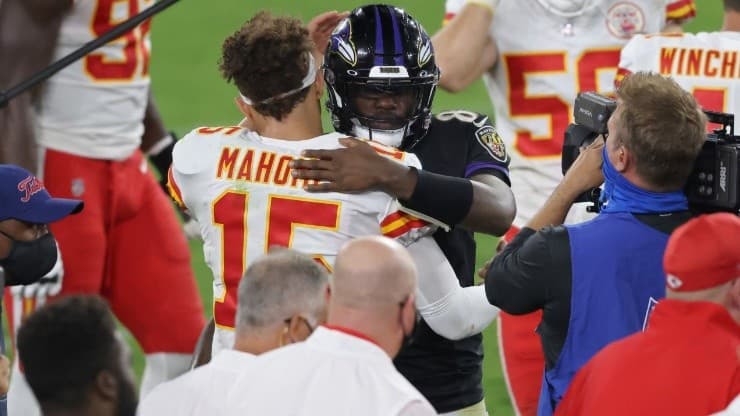 This Sunday, the Kansas City Chiefs quarterback will try to continue his unbeaten record against the Baltimore Ravens, to extend his best streak in the competition.

The stellar game of the Sunday match in Week 2 of the 2021 season of the National Football League (NFL), will star two of the best quarterbacks in the competition, such as Patrick Mahomes and Lamar Jackson, when Kansas city chiefs visit in Maryland to Baltimore Ravens.

It is that beyond the duel between both franchises, which already in the past contest made it one of the most watched games on television, with more than 14 million viewers by ESPN, an always special face-to-face will be experienced among its greatest figures.

Even more so if we take into account that in the global game history, the advantage is for the Chiefs with seven victories against three for the Ravens, there is a new one that is graphic and undeniable: Patrick Mahomes has always beaten Lamar Jackson in his NFL career.

The first time they saw each other was in the Kansas City star’s rookie season, December 9, 2018, when in Missouri, the party had to go to overtime, after equaling 24 points, and it was with a field goal that took the victory.

The second occasion was in the following contest, the Sep 22, 2019, again at the home of the Chiefs and the victory went to Mahomes’ team, who beat Ravens 33-28, despite the comeback that Jackson and company were about to make in the fourth quarter.

His last chance was less than a year ago, the September 28, 2020, when in the same scenario where they will face this Sunday, the M&T Bank Stadium, the victory was categorical for the Missouri cast by 34-20. Will history be able to repeat itself this weekend?