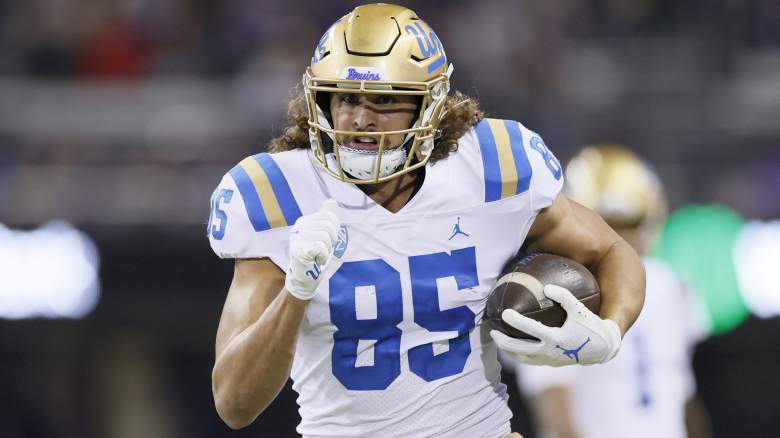 Getty Greg Dulcich #85 of the UCLA Bruins carries the ball against the Washington Huskies during the fourth quarter at Husky Stadium on October 16, 2021 in Seattle, Washington.

The Green Bay Packers are once again hinting that they are interested in taking a tight end off the board in the 2022 NFL draft later this month.

According to NFL Network’s Ian Rapoport, the Packers are one of the teams that held a pre-draft meeting with UCLA standout Greg Dulcich, one of the top tight ends in the 2022 class, last month. The 22-year-old was one of the most productive tight ends in the country last season with 42 receptions for an average of 17.7 yards and five touchdowns. He was also impressive at the NFL Scouting Combine in March.

One of the best TEs in the Draft, #UCLA’s Greg Dulcich continues a busy month with a Top-30 visit with the #Falcons today and tomorrow. He’s met with more than 20 teams in the last month, including TE-needy teams like the #Bengals, #Packers, #Colts and #Chargers, among others.

Unsurprisingly, Rapoport mentioned that Dulcich has received interest from more than half of the NFL teams during the pre-draft process, including teams like the Cincinnati Bengals, Indianapolis Colts and Los Angeles Chargers, who are expected to target a flanker. closed in the drought. The Atlanta Falcons are also hosting him for a top-30 visit this week, which could see him as a second option alongside Kyle Pitts.

The Packers have also shown interest in at least one other tight end, inviting Wisconsin’s Jake Ferguson to their local pro day last week. Ferguson was a consistent contributor for four years to the Badgers, never catching fewer than 30 passes in a season and finishing with a career tally of 145 receptions for 1,618 yards and 13 touchdowns.

The Packers will return their top three tight ends — Robert Tonyan, Marcedes Lewis and Josiah Deguara — for next season, but Tonyan is coming off a torn ACL suffered Oct. 28 and Lewis will turn 38 before minicamp starts. . Even if Tonyan and Deguara take the necessary steps in their progression, it might be wise for them to invest in a talented rookie in the role.

Dulcich didn’t have a high-volume catch production throughout his career, at least not to the level of some of his fellow prospects. He caught a total of 77 passes in his 24 career games with the Bruins, while Notre Dame’s Trey McBride caught 90 passes during the 2021 season alone. What Dulcich lacks on the stat sheet, however, he makes up for with strong hands and flashy athleticism as a vertical threat.

Speed ​​is clearly not an issue for Dulcich. He ranked in the top five tight ends in all three major speed drills: 40-yard dash (4.69 seconds), 20-yard shuttle (4.37 seconds) and three-cone drill (7.05 seconds), adding to the physical intrigue. with a 10-foot, 2-inch long jump that he rated second best at his position.

Here’s what The Draft Network’s Drae Harris wrote about Dulcich in her pre-draft profile:

Greg Dulcich is a good athlete with good speed and agility in a straight line. In the running game, he doesn’t offer much as a run blocker. However, he has the toughness and competitiveness to hold the point of attack. The passing game is where he thrives. He has good route travel in the short and intermediate areas. He can win man coverage against some safeties because of his route-running prowess and his straight-line speed. He has good hands and a very good capture radius, which makes him a viable threat in contested capture situations. In the NFL, he’s likely to be a complementary piece like F to a traditional Y. Offenses that crave multiple TE sets could use it flexed or even in the backfield as an H back. He could afford to gain more mass and strength to aid in his cause as a player of all attempts in the NFL.

In all likelihood, the Packers won’t have to move quickly for Dulcich if they decide they want him. There’s a good chance he’ll still be available when they pick No. 92 overall, but they could even wait until the fourth round on Day 3, when they have both their original pick and their compensatory pick for Corey Linsley’s departure.