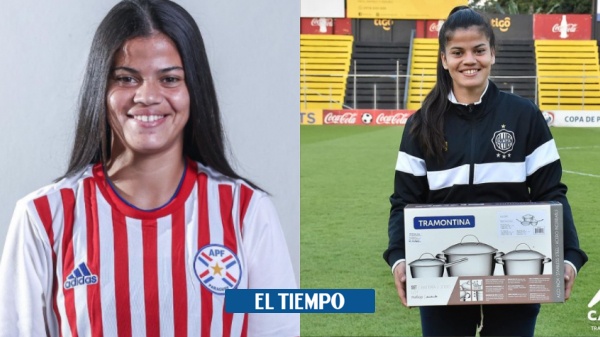 A wave of indignation has awakened a photo of the Paraguayan soccer player Dahiana Bogarin in social networks.

The center of the controversy is that the 20-year-old player received a set of pots for having been the best player of the game in which her team, the Olympia, beat 3-1 at Guarani for the third date of the Women’s Soccer Closing Tournament in Paraguay.

After having scored the second goal of the match and commanding the comeback of his team, Casa Tramontina, a renowned Brazilian brand of kitchen utensils and household products, which for two years has sponsored the women’s branch of the Olimpia Club, highlighted it as the figure of the date and gave him a copy of their products.

(You may be interested in: A new scandal shakes Tokyo 2020, hours before the inauguration).

Although Tramontina has been the main ‘sponsor’ of the Paraguayan ‘dean’ women’s team for two consecutive years, the photo has sparked an intense debate on social networks, in which machismo is questioned that could represent the award to the soccer player.

What do you think that the sponsors gave the beautiful dahiana bogarin a set of pots for being the outstanding player of the date? pic.twitter.com/TtrApLORtQ

Is there a male who has ever been given such an award?

A large part of Internet users wonder if a footballer (man) has been given a similar award.

They can be very #tramontina the pots, but as a reward for a high performance player it is a total mistake, I am sure that a man would not be given this award. 😡 https://t.co/U6ambv8znI

the current context of macho soccer and the concept of “women in the kitchen” within that context, gives enough to get angry, seriously.

What did the footballer say?

As he has announced on his social networks, Dahiana Bogarin seems to be very happy with your prize.

Even, as you have shown, gave the gift her mother, who apparently loved the gift.

One day after the controversial publication, the Paraguayan soccer player has not referred to the subject on time.

So far, he has taken advantage of his Instagram to share comments that detract from the controversy.