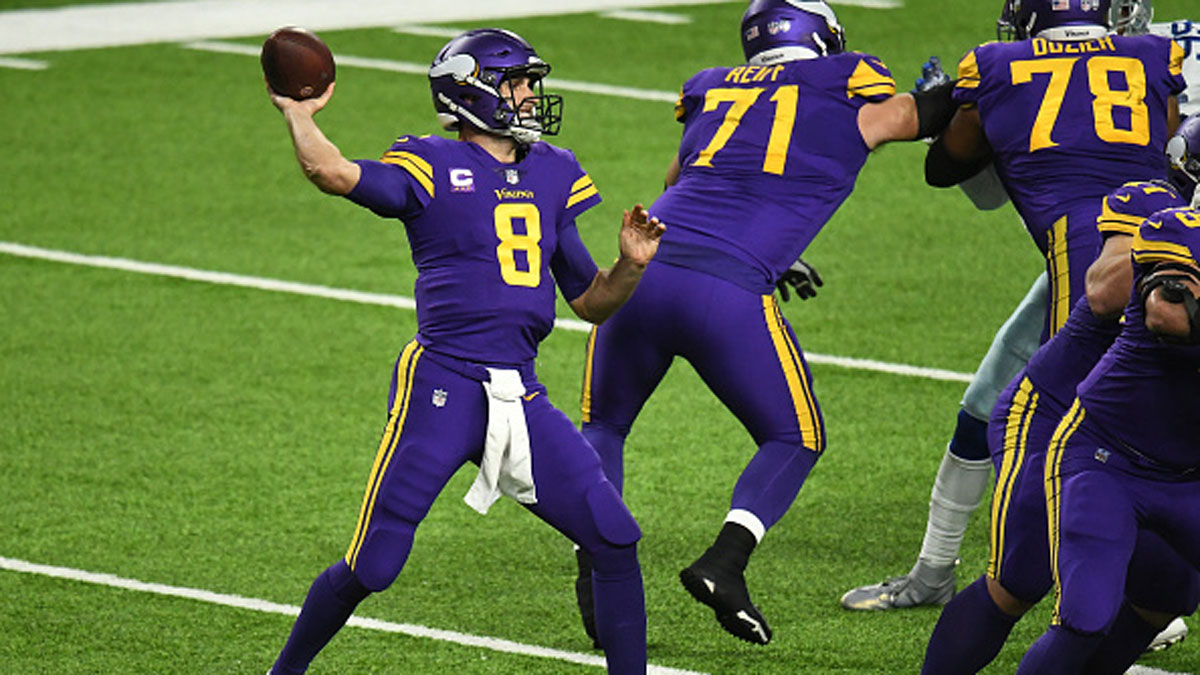 The Las Vegas Raiders dropped the Los Angeles Chargers on Sunday Night Football in exciting overtime, ending the 18-week marathon until the postseason.

The league’s 17-game inaugural season featured many exciting moments, from Justin Tucker’s record with his 64-yard touchdown, to Amon-Ra St. Brown’s touchdown for Detroit’s first win and TJ’s sack. Watt, which was the record for the season, among others.

But despite all the records, wins, and sensational plays of the past 18 weeks, there was some ugly football as well.

From terrible turnovers to embarrassing mistakes, here are the 11 worst plays of the regular season:

11. KIRK COUSINS LINES UP FOR SNAP UNDER THE WRONG LINEMAN

Technically it is not a play, as the ball did not jump, but the moment was too funny not to include it.

Before a fourth quarter and goal against the San Francisco 49ers, Minnesota Vikings quarterback Kirk Cousins ​​ran to the right side of the formation to give advance instructions to his teammates. Afterward, Cousins ​​came back on the line and tried to throw the ball, but nothing happened.

Why? Well, Cousins ​​lined up under right guard instead of center. Running back Alexander Mattison tried to help his QB before Minnesota was forced to run out its second timeout in a one-touchdown game.

The Vikings didn’t get a touchdown after the timeout and ended up losing the week 12 game by eight. It was an embarrassing mistake by Cousins ​​in a high-stakes situation, but it wasn’t even his worst moment of the season (later).

10. EAGLES AND TITANS TRY TO RECREATE HISTORY AND FAIL MISERABLY

Sometimes it is better to leave what is in the past in the past. The Philadelphia Eagles and Tennessee Titans learned it the hard way.

In his first home game as Eagles coach, Nick Sirianni faced a quarter and goal, and prepared a play similar to the most iconic in franchise history: the Philly Special.

But there was a big problem, as Jalen Hurts was not as open as Nick Foles in Super Bowl 52. The 49ers played perfectly, and wideout (and former college quarterback) Greg Ward Jr. threw the ball high overhead. off the head of Hurts for a loss of possession on the downs.

Doug Pederson had to be shaking his head somewhere after seeing “Philadelphia’s Not So Special.”

Then, with the visit of the Buffalo Bills in Week 6, the Titans couldn’t resist the urge to try to recreate the Miracle of Music City.

During a first-quarter punt, Titans returner Chester Rogers received the ball and immediately threw it across the field to cornerback Chris Jackson. As Jackson went on to pick up 22 yards, it was pretty immediately apparent that Rogers threw an illegal forward pass, and he didn’t get away with it.

Not the best Frank Wycheck impression by Rogers.

The sequence was capped off by one of the most infamous moments of the season. McPherson, who hit the post on his previous 57-yard throw, began to celebrate his 49-yard OT win attempt before making sure the ball had passed the posts. But it was a mistake.

Crosby connected on his next attempt, also for 49 yards, to end the kicking craze and give Green Bay the Week 5 win.

8. CAMERON JOHNSTON OF THE TEXANS THROWS THE BALL TO HIS TEAMMATE

More misfortunes from the special teams. Lined up for a punt against the New England Patriots in Week 5, Houston Texans punter Cameron Johnston ran about 10 yards forward and then brought in a moving gunner, giving the illusion that a trick play could come. . Johnston fell back about five meters, took the snap and threw the worst punt of the season.

The fourth-year pro drilled the ball into teammate Terrence Brooks’ helmet and bounced out of bounds at the line of scrimmage for a zero-yard punt.

Coach David Culley said the blooper had nothing to do with Johnston’s proximity to the line, but rather that he hit the ball incorrectly. Perhaps if Johnston had thrown from a normal distance, the ball would not have touched Brooks’ helmet and it would have traveled at least a yard.

7. THE LIONS GIVE THE BEARS A LOSS OF THE BALL WITH A FAILURE IN THE SNAP

While the Detroit Lions finished with the second-worst record in the NFL, Dan Campbell’s group wasn’t totally embarrassed along the way – except for a few exceptions.

During a Week 4 game against the Chicago Bears, Lions center Frank Ragnow threw the ball as quarterback Jared Goff walked to the offensive line to make a pre-play call. The ball bounced off Goff’s leg, then off guard Halapoulivaati Vaitai’s helmet and right into the arms of Bears lineman Bilal Nichols.

If someone described this play without revealing the team that made it, you’d guess the Lions or the Jets, right?

6. DESEAN JACKON’S FIRST AND FORGOTTABLE PLAY WITH THE RAIDERS

DeSean Jackson signed with Las Vegas mid-season, but his first reception as a Raider was not one to remember for the wideout.

Facing rivals Kansas City Chiefs in Week 10, Derek Carr connected with DeSean Jackson for the first time on a deep pass. When Jackson caught her inside the Chiefs’ 25-yard line, there was no one in front of him.

Although, for some reason, Jackson didn’t turn upward, instead stopping and turning to the opposite sideline after seeing Chiefs cornerback Rashad Fenton chasing after him. From there, things got even more complicated, as Jackson was stripped from behind by Fenton and the Chiefs recovered the loose ball.

This could be worse than dropping the ball before reaching the end zone.

5. TYROD TAYLOR THROWS THE BALL AWAY… .. TO THE OTHER TEAM

Tyrod Taylor has recorded nearly 80 NFL appearances over his 11-year career, but made a puzzling rookie mistake against the Miami Dolphins in Week 9.

When Taylor headed to the sideline, it looked like he was going to run out of bounds on a loss or throw the ball. He chose the latter option, but waited until the last second to get rid of the pass and simply threw it over the sideline. Taylor didn’t do a good enough job keeping the ball out of harm’s way as linebacker Jerome Baker picked it up.

It was an impressive play on Baker’s part, both to reestablish himself in bounds and to make the clean interception. But being intercepted in a launch? It is not that impressive.

4. THE UGLY INTERCEPTIONS OF CARSON WENTZ

The good news about Carson Wentz’s first season in Indianapolis: He reduced his interceptions from 15 in 12 games last year to seven in 17 games.

It’s impossible to single out just one, so let’s quickly run through the worst three. First, the shovel pass interception from Week 2 near the goal line against the Los Angeles Rams.

Then there was another shovel pass in the red zone that went wrong against the 49ers in Week 7. This time, as he was thrown to the ground, Wentz tried to pass to an open Zach Pascal in the end zone and stayed behind. about eight meters.

And finally, perhaps the most Carson Wentz interception of them all from Week 8: a left-handed prayer while being tackled in the end zone by multiple Titans defenders that resulted in a pick-six.

The phrase “live to fight again” does not appear to be part of Wentz’s vocabulary.

3. THE GIANTS RUN A QB ON THIRD AND NINE

This was going to be a top 10 list, until the New York Giants made an outrageously pathetic play on Sunday, January 9.

In the second quarter of the game against the Washington football team, the Giants were forced to perform a quarterback sneak with the third player, Jake Fromm, on the second and 11 of the 2-yard line. That made some sense to gain extra space for the third down and a potential punt. But in the third and nine, the Giants sneaked through the middle with Fromm again.

A QB in the long third in a pointless game at the end of a disappointing season. Really? Joe Judge didn’t go on a rant for 11 minutes defending the play after the game, saying he wanted to give the Giants more room to punt. Yes, Fromm has struggled a lot, but what if a play is made that at least gives you a chance to convert?

ESPN’s Adam Schefter reported in late December that the Giants were planning to bring Judge back next season. The last two weeks have made that plan look a lot worse.

2. THE DOLPHINS LAUNCH A SCREEN SWAP IN THEIR OWN END ZONE

Leaning on your own 1-yard line? How about a screen pass in the end zone?

That idea sounded good to the Dolphins in Week 3, when quarterback Jacoby Brissett threw a pass to wide receiver Jaylen Waddle in Miami’s end zone. After catching the ball, Waddle was immediately tackled by Las Vegas Raiders cornerback Casey Hayward for one of the easiest safeties you’ve ever seen.

The play was historically bad. According to Pro Football Reference’s plays database, it was the first time in NFL history that a safety occurred on a completed pass with no turnovers or penalties. Well done, Dolphins.

1. THE INTERCEPTION OF KIRK COUSINS

If you had only seen Bears safety Deon Bush catch this ball on Monday night in Week 15, you would have thought he was making a punt. But it was actually a pass Cousins ​​made from a fairly clean pocket that didn’t end up in the same area code as another Vikings player.

A different angle shows that the intended target, star Justin Jefferson, fell on the play after some contact with a Bears defender, and Cousins ​​said he did not see Jefferson fall before releasing the ball.

That explanation does not take away the excellence of the play (terrible?). So congrats to Cousins ​​for making the best and worst play of the season (and to the Jets for not making this list).

East Article was originally published in English by Eric Mullin for NBCSports.com For more from NBC Sports enter here.