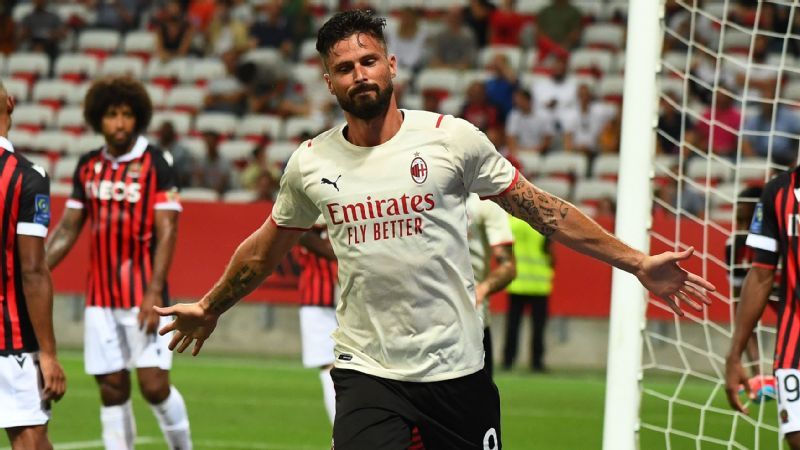 Olivier Giroud He stopped being a Chelsea player when he completed his move to AC Milan last month after playing a decade in the Premier League.

In just two and a half seasons at Stamford Bridge, Giroud scored 39 goals and dished out 14 assists in 119 appearances, winning two FA Cups, the Europa League and the Champions League.

The world champion’s pass would have cost Milan just € 2 million, and it took the Frenchman about five minutes to begin to reward his new club’s faith by turning his first touch into a preseason friendly against Nice on Saturday.

Giroud came on as a substitute in the 61st minute and converted the goal of the tying header in the 66th minute. The most recent bearer of the prized number no. Milan’s 9 wasted no time opening his account.

The truth is that the veteran forward has scored in all the teams he has played. He left the Premier League with 90 goals in 255 games, divided between Chelsea and Arsenal. In addition, he has 117 games played for the France team, with 46 goals scored. He is the second top scorer in the history of Les Bleus; only Thierry Henry (51) found the network more times for his country.

Olivier Giroud scored his first goal for AC Milan with his first touch!

The most underappreciated striker of his time? 🤔 pic.twitter.com/0UehY80Dr4

Giroud also won the Puskás Award in 2017; his reverse bike goal for Arsenal against Crystal Palace was voted the best in the world in the previous 12 months.

And yet Giroud remains underrated and unloved by a large number of fans. But the results are undeniable and are visible to all.

And he is not the only one in this situation. In an age of generic strikers creating overlaps and overloads, the figure of the old striker is a football anachronism. The pure center forward is not the commodity it used to be.

Although entirely subjective, there are some top-scoring center-forwards who play in Europe’s big leagues and they don’t seem to receive the recognition and adulation that many of their equally prolific predecessors once did.

having operated under the considerable shadow of Cristiano Ronaldo At Real Madrid for so long, it seems to have been overlooked that Benzema used to beat the 20 goal barrier in all competitions, while his partner scored ridiculous fifty. In fact, the French center-forward managed it only in La Liga during each of the last three seasons, when he once again became the focal point of Los Blancos’ attack.

With his departure from Manchester United enabled after being accused of not offering enough up front, Lukaku rebuilt his reputation at Inter by scoring many goals and leading the attack with his formidable presence. The Belgian scored 30 goals in 44 games and provided 11 assists in his debut season with the Bianconeri, propelling his new team to their first Serie A title in 11 years. Even so, it is difficult for him to convince some viewers.

His name is hardly mentioned outside of Italy, but Immobile has scored more than 150 goals for Lazio since joining the club from Seville in 2016. The 31-year-old, a hard-working center forward who never gives up, covers more. ground than most and has provided 42 assists for his teammates in the same period of time.

Somewhat ungainly at best, at Manchester City Dzeko earned a reputation for being able to convert with just about any part of his body. He was the scorer of that key tying goal for City against QPR in the 92nd minute on the final day of the 2011-12 season, though Sergio Agüero’s winning shot 120 seconds later somehow overshadowed the Bosnian’s contribution.

Since moving to Rome, Dzeko has become the club’s top scorer in four of the last five seasons, scoring 39 goals in all competitions in 2016-17. However, the general perception is that he is not among the top center forwards.

Mandžukić is without a club after seeing his short-term contract with AC Milan expire at the end of the 2020-21 season, with injuries limiting him to just 11 appearances.

The 35-year-old Croatian forward has played for some of the biggest clubs in European football – Juventus, Bayern Munich, Atlético Madrid – but he still manages to stay in the conversation of top forwards of the last ten years.

That despite having scored many important goals for his club and national team in that period, including his sensational volley against Real Madrid in the 2016-17 Champions League final (which was nominated for the 2017 Puskas Award, which Giroud ended up winning. ) and the overtime goal that ended up eliminating England from the World Cup in the 2018 semi-finals.

Aspas left the Premier League with something of a punchline after his stint at Liverpool, which was closed with such a terrible corner kick that it still remains the subject of comment (with a pained expression) to this day.

However, since returning to Spain, the striker has recaptured his form and scored more than 100 La Liga goals for Celta and finished as the club’s top scorer for six seasons – only to end up losing a place in the Spanish team of La Liga. Euro 2020. Really puzzling.

A late-coming player, Moreno didn’t play at the top tier until he was 22, but has since established himself as one of the most productive forwards in La Liga.

In fact, of all the top-level Spanish players, only the super star of Barcelona Lionel messi (38 goals, 12 assists) has been involved in more goals in all competitions than Villarreal player Moreno (29 goals, 10 assists) last season.

As for personal results, it couldn’t be more surprising. But there were few outsiders of Spain who knew anything about him before he was part of the Euro 2020 team.

Usually punished and criticized, but there is a reason why Europe’s top teams continue to sign Morata.

He leads the line well, keeps defenders busy, is very good in the air and has shown that he was able to maintain a good average of goals per game throughout his career while he has been able to show off from time to time with wonderful goals that have left us. breathless.

Consistent and prolific as well, Wood continues to make his league play scoring chunk for Burnley in the club’s relentless effort to put up a fight above his weight class in the Premier League.

Formed from the same mold as Giroud, Wood specializes in being a nuisance, physically facing defenders and finding the open spaces in the area to operate.

Wood has played in four Premier League seasons for the Clarets and has scored more than 10 goals in all of them. And as if to underline his importance, the New Zealander international has also finished the 2020-21 campaign scoring or assisting 11 of his team’s last 14 league goals.

After failing to make big strides at Liverpool due to fitness issues, Ings has practically been forced to start his career from scratch.

He signed with Burnley and scored 43 goals in 150 games before returning to Southampton, where he has enjoyed a great rebirth and that has brought him a call-up for the English national team.

With great momentum, Ings has averaged goals per game of one in two for the Saints since the start of the 2018-19 season.

The forward even managed to surpass the 20 goal mark in 2019-20, becoming just the third Southampton player of all time to achieve that feat in the Premier League, behind Matthew Le Tissier and James Beattie.