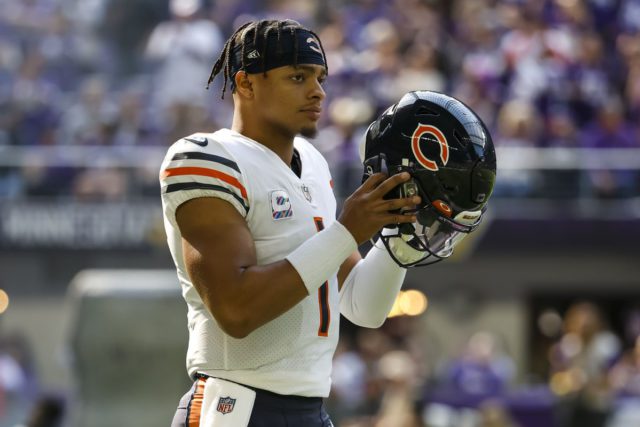 It’s just a few hours before the Dallas Cowboys’ Week 8 clash against the Chicago Bears. And one of the more interesting details the cowboy defense will have to highlight is keeping Chicago quarterback Justin Fields at bay. Who runs an excellent running game, as has been seen consistently in the regular season.

The boy who was the 11th pick in the 2021 Draft has the particularity that he is a mobile quarterback. Just like the franchises are looking for in the current NFL. So far this season, he has 364 rushing yards and two touchdowns. And he’s coming off a great average against New England for Week 7, putting up 82 of them on 14 carries and one of those touchdowns.

The #DaBears They already have a 10 point lead in Foxborough🤷‍♂️😳😅

“His skill set speaks for itself,” linebacker Leighton Vander Esch said of Fields. “He is an extremely talented athlete, obviously his size helps him. He has speed, he is going to look to run the ball. Even in those kind of games he is dangerous. You have to get everyone running to the ball and keeping all their chores while the guys up front have to keep it in the bag.”

And that is clearly going to be the goal of the cowboy defense, to keep Fields in the bag and prevent him from escaping. They would do something similar with Jalen Hurts in week 6 against Philadelphia. Despite the 26-17 loss, the defense was able to hold off Hurts with only 27 rushing yards on nine carries. Something similar is expected to happen with Justin.

Dialing up the pressure ☎️ ➡️ @dantefowler answers the call!

Also, the Lone Star team snapped up Johnathan Hankins this week, arriving via trade from the Raiders. The defensive tackle is expected to make an appearance this weekend as he doesn’t need to do any conditioning to adjust. The same defender affirmed it during the middle of the week before the media.

“I already played last week, so it’s not like I came off the streets or anything, my physical condition is perfectly fine,” Hankins said. “I’m ready to go out and play, the only difference is now I’m doing it for the Cowboys. I think I can get to know enough this week to go out there and play the Bears at a high level. It’s only Wednesday so I have plenty of time, I’ll be fine.”

What is certain is that the Bears’ coaching staff has evaluated a lot of things regarding their own roster and they may represent a greater threat to the Cowboys if they put their minds to it. Without a doubt, they made some small personnel changes against the Patriots and it paid off. Among them, Michael Schofield at the right guard position, serving as greater protection for Justin Fields and opening spaces in the ground game. And as mentioned, engineering runs for the Bears’ Quarterback.

The big problem that Chicago has is that they have had some execution errors that have not allowed them to shine a little more in the league. His 3-4 record doesn’t look encouraging. But they may have learned from their mistakes and perhaps realized that the game on the ground suits them much better to decide games. And this is something Dallas cannot afford under any circumstances.

We’ll see what happens, what is certain is that the cowboy defense will have to pay attention to Fields and not only his passing game, but also what he can contribute on the ground. By keeping him in the bag and capturing him, Dallas will have a better chance of winning the game. That is the strategy, and that the offense can fully respond and take the points in its own stadium.

Not underestimating Justin Fields will be vital for Dallas against Chicago