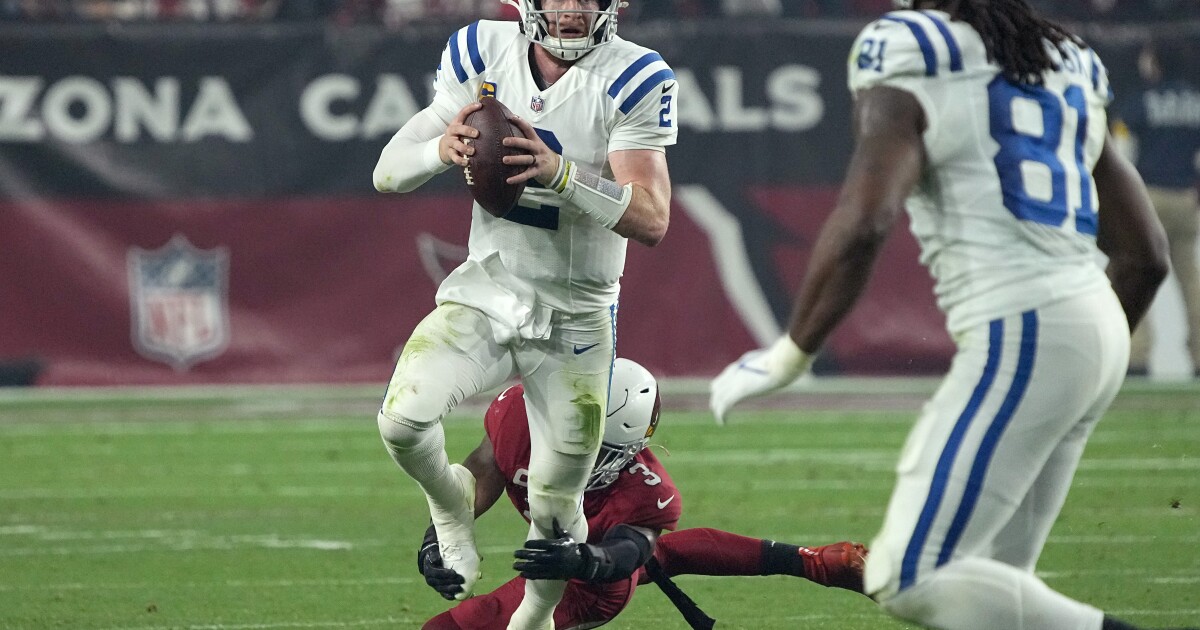 INDIANAPOLIS (AP) – The NFL is reducing the time in isolation for players who test positive for COVID-19 and are asymptomatic, including those who are not vaccinated, from 10 to five days.

Both the league and the league’s players’ union revised the coronavirus protocols on Tuesday, after the Centers for Disease Control (CDC) modified its parameters for the asymptomatic, recommending a five-day quarantine and use of a mask during the next five.

The changes would allow Colts quarterback Carson Wentz to return for Sunday’s key game against Las Vegas after Indianapolis placed the player on the COVD-19 roster.

It was not immediately known if Wentz tested positive for the virus or had close contact with someone else who contracted the condition.

But if Wentz has no symptoms, he could get the go-ahead to play.

In a memorandum sent to teams and obtained by The Associated Press, it is stated that essential sports personnel and players may return under the following conditions:

—Five days have passed since a positive test for COVID-19.

—That at least 24 hours have passed since the last time the individual had a fever, without the use of medications for that purpose.

—That other symptoms, such as cough, have gone or reduced.

—That the team’s chief physician, after consulting with the Sports Infection Control office and prior notification of the NFL chief physician, determines that the individual may return to the club’s premises and interact with other contractors or employees.

—That any other local regulation or requirement be met.

The Tennessee Titans, who could clinch the AFC Southern divisional title with either a win or a loss for the Colts, also added two to the roster: linebacker Jayon Brown and catcher Cody Hollister, from the squad. practice, who played three of the past four games, including one as a starter.

With this, the total number of Titans players reaches nine, without considering a tenth player who was ruled out for the remainder of the season by going on the disabled list.

The timing couldn’t be worse for the Colts, who have bounced back from a 1-4 start to win eight of their past 10 games. They can secure one of the AL’s seven playoff tickets with a win over the Raiders.

Indianapolis’ move comes a day after five players, including right tackle Braden Smith, were included on a list that grew rapidly in less than 24 hours.

Wentz’s backup is rookie Sam Ehlinger, who played in three games but hasn’t thrown a pass this season. He was a sixth-round draft pick.

Brett Hundley and James Morgan are on the Indianapolis practice squad. Veteran Hundley is 3-6 as a starter in the NFL.

Tampa indicated that assistant and rushing coordinator Harold Goodwin will be the interim coach in the absence of Arians. The reigning Super Bowl champs visit the New York Jets on Sunday.

– The Bengals included wide receiver Auden Tate, who has not played since Week 7 and is also sidelined with a calf injury.

NFL reduces isolation time for those who test positive