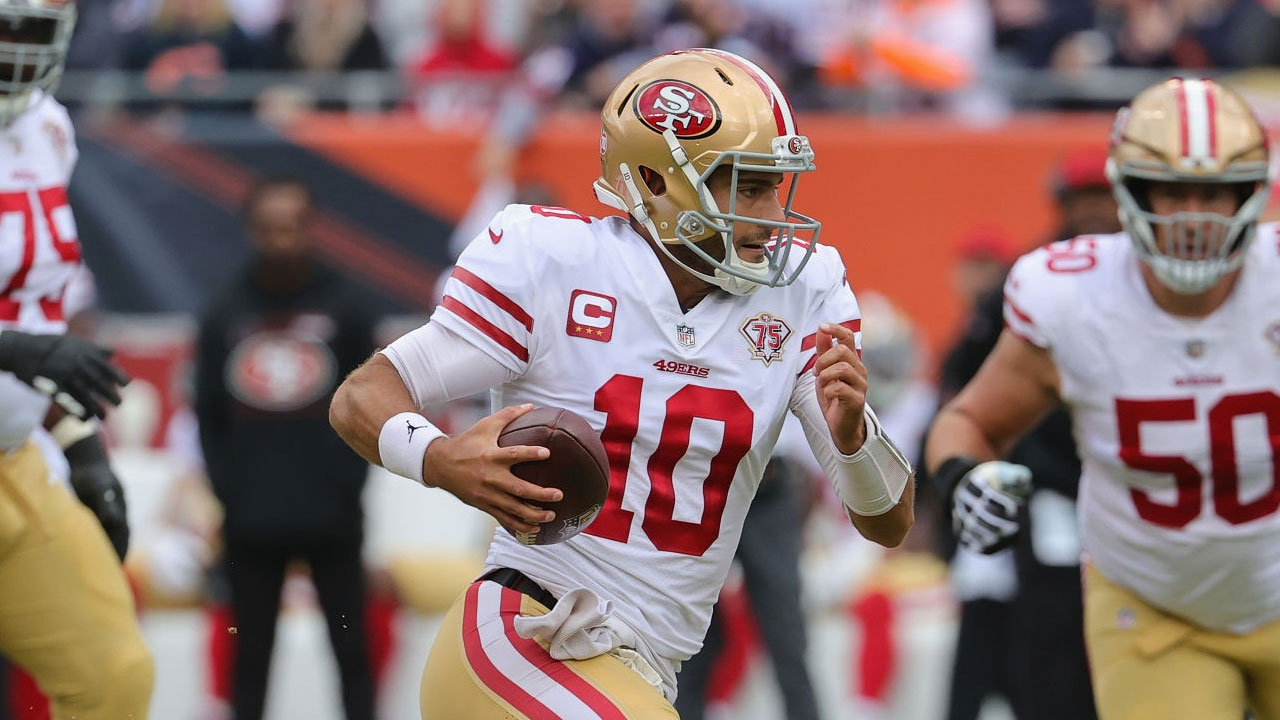 In the NFL news this Thursday: Alvin Kamara, out for Thanksgiving; Jimmy G could continue to be QB of the 49ers in 2022, the case of Everson Griffen; and more. Don’t miss the NFL news.

Everson Griffen will receive “care he needs” after sparking controversy

Vikings defensive end Everson Griffen was the center of attention in the news yesterday after getting caught up in a peculiar problem. Through his social networks, at dawn on Wednesday, Griffen published a video and screenshots of text messages alleging that “someone wanted to kill him” within the premises of his home.

In the recording, Griffen was sitting in a room holding a weapon that he claimed was registered in his name and that a teammate had helped him acquire. For his part, the screenshots of the text messages, which presumably showed a conversation with his agent, were sent at dawn and Griffen asked for “help”. Both video and captures were later removed, however, with that information in hand, Minnesota did not hesitate to issue a statement:

“Vikings representatives and team mental health professionals have been at Everson Griffen’s home since early this morning and are cooperating with the law,” the Vikings statement said. “Our only concern at this time is the safety and well-being of Everson and his family. We will have more comments at an appropriate time. “

Later, the Minnetrista Police Department released an update on the matter. Through a statement, via Lou Gaguse of KARE, the department said it responded in the middle of the morning to a 911 call that Griffen made stating that he needed help because there was an intruder in his home. In addition, he also commented that he had fired a gun, but that no one was injured.

Officers, upon arriving at Griffen’s residence, found no intruder inside, however, the defensive end refused to leave his home. Starting shortly after 7 a.m. local time, Vikings law enforcement officers and mental health professionals worked alongside Griffen to resolve the situation. However, it was until after about an hour that the officers convinced him to leave his home, resulting unharmed, as confirmed by the team itself:

“Law enforcement agencies have notified us that Everson Griffen left his home without incident and is now receiving the care he needs,” the statement said. “We thank the Hennepin County Sheriff’s Office, the Carver County Sheriff’s Office, the Minnetrista Police Department and the Orono Police Department for their prompt response and dedication to ensuring that the situation ended peacefully. Our focus continues to be on Everson’s health and safety and providing the right resources for him and his family. ”

This is not the first time that Griffen has experienced similar events. In 2018 he dealt with mental health issues that kept him out for five games. Additionally, earlier this season he suffered a concussion in a car accident that occurred when he swerved to avoid hitting a deer on the road.

Finally, HC Mike Zimmer, did not have much to add to the organization’s statement: “He has been with us for a long time. Work hard, ”said Zimmer, through Chris Tomasson of St. Paul Pioneer Press. Zimmer said he wasn’t sure if Griffen was safe or what his status might be for next Sunday’s game against the 49ers. However, the head coach emphasized that for now he is more concerned about the well-being of his player. What do you think about the problem in question?

Week 12 of the 2021 NFL Season gives us this Thanksgiving Thursday a triple card where at 7:20 p.m. Central Mexico, the Bills will visit some Saints who will have their running attack reduced. On Wednesday, New Orleans confirmed that RB Alvin Kamara was ruled out of the game against Buffalo.

Due to a knee mishap, this will be the third consecutive game in which Kamara is absent, however, it is not surprising that he does not play tonight considering he did not practice anything all week. However, the bad news does not end with him. RB2 Mark Ingram, who has a total of 132 yards on 17 carries since joining the Saints last month, is listed as “questionable.”

Therefore, by this Thursday, the rushing offense of those led by Sean Payton could end up falling into the hands of Dwayne Washington and Tony Jones Jr., who, between the two, combined for only 95 yards so far this season. Plus, they also have RB Josh Adams on the practice squad.

Finally, RT Ryan Ramczyk (knee), and DE Marcus Davenport (shoulder) and Tanoh Kpassagnon (ankle) were also ruled out for the match against some Bills who in their Week 12 injury report reported that they did not present any come down. Additionally, LT Terron Armstead (knee / shoulder) joins Ingram in the questionable category. How will these absences hurt the Saints?

Jimmy Garoppolo could stay with the 49ers in 2022

Ever since the 49ers selected QB Trey Lance with the No. 3 overall pick in last April’s draft, it was known that the rookie would be the future of this franchise. However, for now, QB Jimmy Garoppolo is San Francisco’s starter and present, and when HC Kyle Shanahan was questioned on Wednesday about whether Jimmy G could remain in the team for 2022, Shanahan did not rule out the option:

“There’s the possibility of anything, but I think we’ve made it pretty clear that Trey is our man of the future, whenever that happens,” Shanahan said. “But it’s also nothing against Jimmy that we’ve taken Trey to be our man in the future.”

The key in Shanahan’s words is “whenever that happens.” Garoppolo is currently playing under a 5-year, $ 137 million contract he signed in 2018, which will expire until the end of the 2022 NFL Season, and if Jimmy G were to stay with the team for another year, its impact against the salary cap. the following campaign would be 27 million dollars; a figure too high for a quarterback who, under the understanding that it is no longer the future of this franchise, sooner or later should go to the bench.

For its part, San Francisco signed Lance under a 4-year, 34.1 million dollar rookie contract to first gain experience behind Garoppolo, however, time is running out, and by now Lance is the only one of the five quarterbacks selected in the league. first round this 2021 who has not yet assumed the position of starter in his respective team.

Undeniably, Jimmy G is more capable than the quarterbacks the other rookies had to beat, yet keeping both players on the 49ers for next season without a possible restructured Garoppolo deal is hard to believe. When would be the appropriate time for the 49ers to take on an eventual change of baton at the position?

Is door shut on Jimmy G returning to 49ers in 2022? “There’s a chance for anything,” Kyle Shanahan said. https://t.co/TWyNbv1PeR pic.twitter.com/81qwafBE6U

Browns get Kareem Hunt and Jack Conklin back

The Browns have taken a very important step towards the close of the 2021 NFL Season. Last Monday, HC Kevin Stefanski declared at a press conference that RB Kareem Hunt and RT Jack Conklin should participate in practices this week from Cleveland ahead of next Sunday’s game against Baltimore. And just so it was.

The Browns announced Wednesday that both Hunt and Conklin were designated to return from Injured Reserve. Hunt has been out since suffering a calf injury against Arizona in Week 6. Conklin suffered a dislocated elbow in Week 8. Now, a 21-day window opens for Cleveland to officially activate the roster. of 53 to both players and everything indicates that they could even see action on the field already this next Sunday when they face the Ravens.

This 2021, Hunt, who serves as RB2 behind Nick Chubb, accumulates 522 total yards from the line of scrimmage (361 on the ground, 161 in reception) and 5 TDs. Meanwhile, Conklin started in the 6 games he has played this year; in fact, he’s started in the 21 games he’s played since joining the Browns in 2020. Can Hunt and Conklin power Cleveland in a bid for the postseason?

In more NFL news, the Dolphins’ running game could take a drastic turn in the foreseeable future. This Wednesday it was confirmed that Miami claimed waivers from RB Phillip Lindsay, announced his agent, Mike McCartney.

Lindsay signed as a free agent with the Texans in the previous offseason, however, Houston decided to dispense with his services on Tuesday. This season he has only 130 total yards and 1 TD on 50 carries, in addition to 3 receptions for another 37 yards and 1 touchdown.

However, despite the fact that his numbers this season are not convincing, his talent is undeniable. In both 2018 and 2019, playing for Denver, he managed to overcome the 1000+ yard barrier, combining for 16 TDs. Plus, right in 2018, his rookie season, he was selected Pro Bowler, and now, he’s looking for a fresh start.

For the running attack of the Dolphins, this incorporation will seek to solve the multiple problems that have gone through this season. At just 77.4 yards per game, Miami’s rushing offense is the second worst in the NFL, led by RB Myles Gaskin (433 yards, 1 TD) and Malcolm Brown (125 yards, 1 TD). Can Lindsay make an immediate impact with the Dolphins?