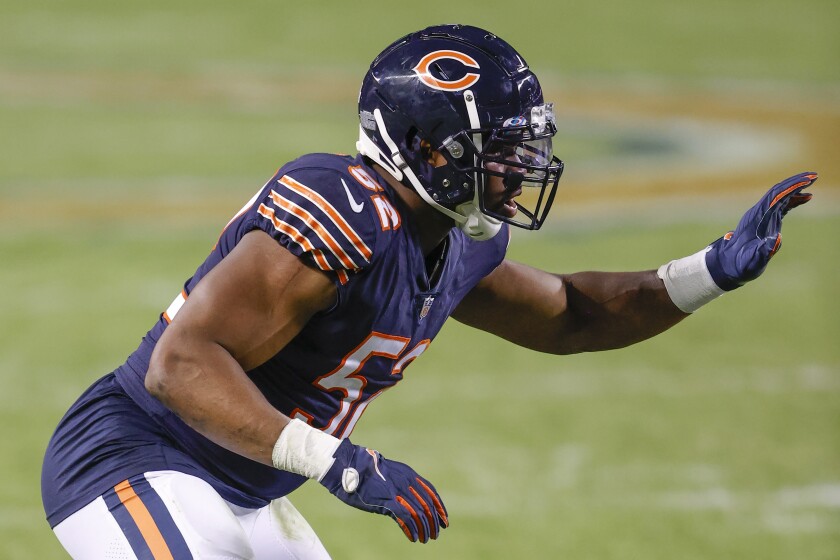 In January, coach Brandon Staley spoke about the Chargers’ defensive struggles in 2021, noting the attrition the team experienced “at the point of attack and in the secondary.”

Staley then mentioned two areas that need to be addressed this offseason: the defensive line and the secondary.

So, in that fairly clear context, welcome to 2022 free agency, where the Chargers will take their next significant steps in reshaping a roster that Staley says needs to be “complete” and “deep” for the team to improve. .

Negotiations with available players throughout the league can begin at 9 a.m. PT on Monday. Transfers can be made official from 1 pm on Wednesday.

The Chargers’ first major step toward defensive improvement came Thursday when they agreed to trade for edge rusher Khalil Mack, sending Chicago a second-round pick in 2022 and a sixth-round pick in 2023.

There will be more moves. The Chargers’ other concerns heading into free agency include the right side of their offensive line, running back, tight end, wide receiver and linebacker.

Yes, linebacker, which means that side of the line of scrimmage could see a notable makeover before Staley’s second training camp with the team opens this summer.

Among the decisions facing general manager Tom Telesco and his staff are what to do with three young inside defensive free agents: edge rusher Uchenna Nwosu, tackle Justin Jones and linebacker Kyzir White.

The acquisition of Mack suggests that Nwosu will not be hired again. On Friday, a message Nwosu shared on Twitter — “Business is business” — seemed to confirm that his time with the Chargers is ending.

Jones missed six games last season — five with a calf injury and one while on the COVID-19 reserve list — and his absence was obvious.

White emerged in his fourth year, starting all 17 games and leading the Chargers with 144 tackles, third-best in the AFC. He also had two interceptions and provided the defense with an incisive character.

As for outside free agents, the Chargers have the room to be aggressive buyers, even after Telesco said earlier this season that he will be “more selective” in his free-agent budget.

The Chargers are among the teams that have been linked to JC Jackson, widely regarded as the best cornerback on the market. Pro Football Focus projects the former Patriot’s next deal will be $18 million a year.

Another option the Chargers will likely consider is Darious Williams, the Rams’ starter the past two seasons, including 2020, when Staley was their defensive coordinator. Williams is the fifth-ranked free cornerback by PFF.

A similar connection can be made with defensive tackle Sebastian Joseph-Day, who has started 38 games for the Rams since 2019. The list of available standout tackles also includes former Chicago Bear Akiem Hicks and former Cincinnati Bengal BJ Hill.

The Chargers finished 30th against the run last season, allowing 138.9 yards per game. Opponents also converted 49.5% of third downs in the league.

“It’s got to be a lot better going forward,” Staley said. “I know it will be. That will happen over time.”

The Chargers lost the two starters on the right side of their offensive line — tackle Bryan Bulaga and guard Oday Aboushi — to injuries that ended the 2021 season. Bulaga, who has one year left on his contract, is expected to be released and Aboushi is a pending free agent.

There are plenty of options in free agency, including guards Laken Tomlinson, Connor Williams and Austin Corbett, and tackles Morgan Moses, Trent Brown and Riley Reiff, all of whom are ranked among the best available by PFF.

Running back and tight end are two positions where the Chargers could use more depth.

Austin Ekeler produced 20 touchdowns out of the backfield last season, but he needs help. Veteran tight end Jared Cook, brought in via free agency a year ago, doesn’t appear to be returning.

The Chargers could also be looking for another wide receiver, including with Mike Williams signing a three-year extension on Tuesday. With a quarterback like Justin Herbert, too many potential targets aren’t possible.

Whatever the Chargers look like in the 2022 season, the picture will continue to take shape very soon.

Despite all the big names on the table, Staley said the idea wasn’t just to amass the most talent.

“Talent… that word is something that doesn’t add up to me because it’s not what a team is built with,” he said. “There is a difference between being a talented team and being a champion team. The goal is to become a complete team. That is where we are heading as an organization.”