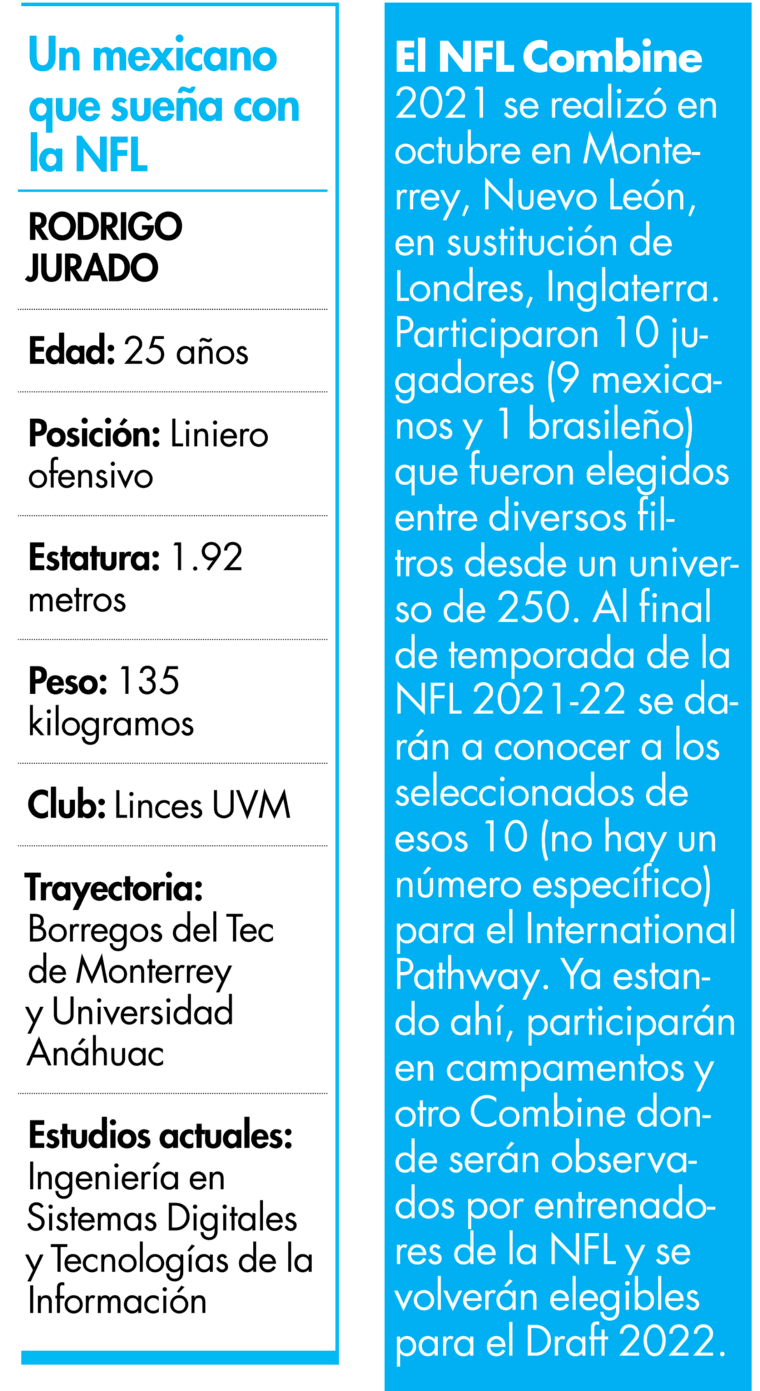 American football is recognized for being the cultural sport par excellence of U.S, but since the dawn of its most important league, the NFL, has had a touch of multiculturalism from other nations. In the current season, there are a total of 56 players born in different countries on the five continents present in the first team rosters, although the door is not yet fully open for Latin America.

The Mexican Isaac Alarcón of the Dallas Cowboys, the Chilean Sammy Reyes of Washington and the Brazilian Cairo Santos of the Chicago Bears are the only representatives of the region in the main rosters, but thanks to projects such as the International Pathway and NFL Combine, talent detection in Latin America and other parts of the world has begun to refine and push the dreams of those who aspire to reach the highest level.

One of them is the Mexican offensive lineman Rodrigo Jurado, who was part of the tests of the NFL Combine last October in Monterrey, Nuevo León. This program consisted of the detection of around 250 candidates around the world who, through various filters, were reduced to 10, of which at least one Mexican will make the leap to the International Pathway, which is the prelude to the main rosters from NFL. Alarcón and Reyes left for Dallas and Washington, respectively.

“From the moment they tell me that I am one of the final 10 selected, it was not so much a shock for me, but rather the nervousness changed to pride because this is a reward of years of work,” says Rodrigo Jurado to The Economist, after being selected at the NFL Combine from a list of between 30 and 50 Mexicans, but of which only nine and one Brazilian remained.

Jurado is an offensive lineman and plays for Linces of the Universidad del Valle de México (UVM); previously, he was a player in the Anahuac University Y Sheep from Tec de Monterrey. He is 25 years old and studies Engineering in Digital Systems and Information Technologies; He measures 1.92 meters and weighs 135 kilos, a very favorable condition considering that the average height of his position in the NFL is 1.95 meters.

“The Mexican physiognomy has a marked stereotype in height except for some positions. Particularly on the offensive line, the Mexican does not tend to be very tall, but the Mexican has a lot of heart, I can say that I was the strongest lineman in the Combine ”, says Rodrigo, who thanks to the improvement of his routines in recent years now He is capable of lifting 280 kilos with squats and over 35 repetitions of chest with 215 kilos of lifting.

His original idea was to complete his studies and play American football in the Canadian league, because although he is a fan of the Seattle Seahawks and “without being fatalistic”, he felt that reaching the NFL it was a more than complicated path. But after nine years since he started in this sport, he intensified his routine to reach his highest physical-tactical level and the opportunity was opened thanks to the Combine.

“The whole process is a work of years, although I started playing late (16 years old, in high school). Once a veteran told me that football is a sacrificial sport, that everything you sacrifice for it is going to pay off and fortunately it is being proven. The same that I sacrificed, I do not doubt that the others who were in the Combine: parties, outings, family reunions, commitments, those things change them for training sessions, gyms, diets, all those specific issues mark a lot, excellence comes from exceeding oneself and tyranny of the small differences ”.

After the Combine, there will be a camp that will start between January and February and conclude between March and May, as well as another Combine with a Pro Day with NFL team visors, where those chosen can be selected for the 2022 Draft, with the presence of coaches watching prospects, as happened to the Mexicans Isaac Alarcón and Alfredo Gutiérrez, the latter is not yet in the 49ers first team but already trains with the practice squad.

“Before the Combine, one of my roommates recommended that I send a message to Isaac (Alarcón) to ask him for advice and I thought he was not going to answer me, I wrote him on Instagram and not two hours passed when he answered me and it The first thing he did was congratulate me, he told me that they were very interested in seeing fast linemen and that I should polish my English a bit, that’s how I did it. Isaac is a very religious and humble person and I had no problem communicating with him ”, remembers Jurado, in a small conversion that nourished him a lot in his spirit of competition.

–How much growth have Mexican players had to get closer to the NFL?

– “Mexico has been developing more and more not only in American football, but in sport in general, each time they are turning more to see here, before soccer was the sport where it was common to see that some Mexican went abroad, but that there are more and more sports means that it is growing. I had to meet the marketing director of NFL Mexico and he mentioned that the NFL has the best athletes in the US, but now they want to focus on having the best in the world and that is why they pay so much attention to Mexico, because compared to other countries, That tells you that Mexico is already a benchmark, the eyes are already here and what pride that we open the way for future generations ”.

–How much difference do you keep noticing between American football in Mexico and in the US?

– “The truth is, I consider that we are far from far, at the end of the day everything is a matter of rhythm, perhaps the football there is faster, but the only difference is the physical preparation, I am not saying that there is better or worse, but different because here unfortunately or fortunately there are teams that do have infrastructure, in Borregos (Tec de Monterrey) they have an incredible team while there are others with very basic gyms, that part is still very limited in Mexico ”.

The decision of those elected to the International Pathway will be until the end of the current NFL season. In 2021, a total of 11 elements were selected from Germany, Japan, France, Austria, New Zealand, the United Kingdom, Italy and of course the Latin Americans Gutiérrez (Mexico) and Reyes (Chile), the latter being the most prominent in giving the I jump straight to the main Washington Football Team roster.

NFL Combine, a door that opens dreams in Mexico