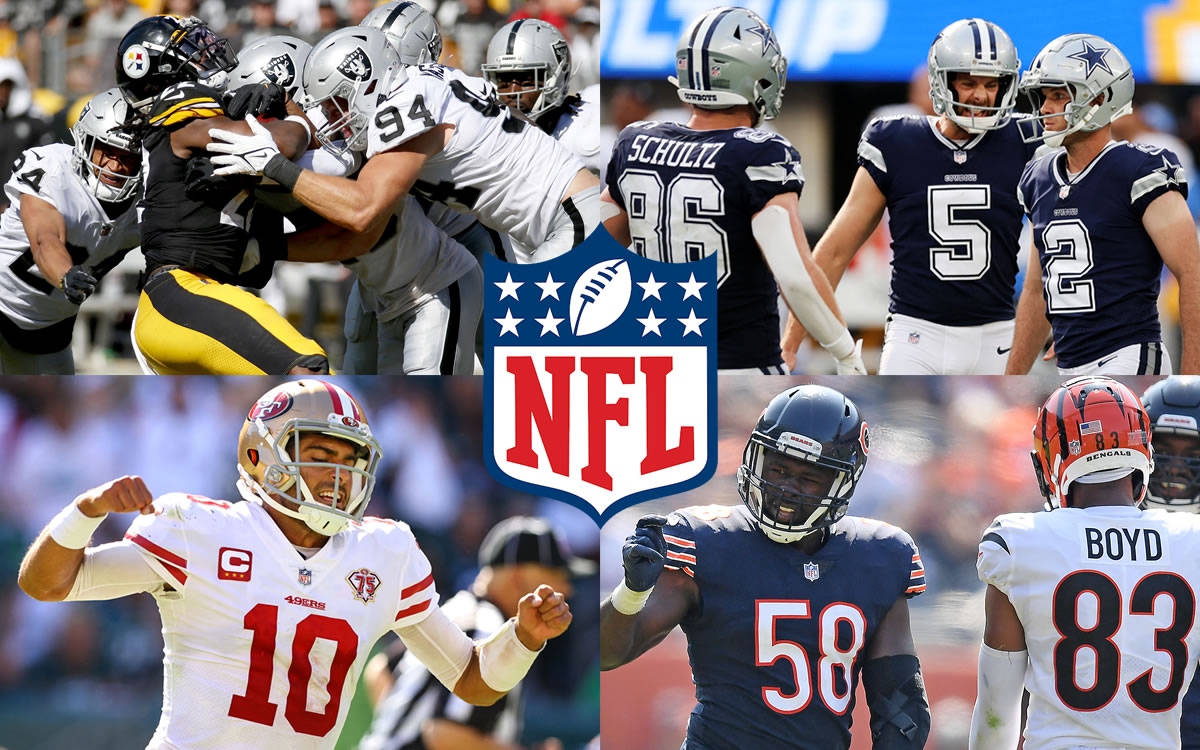 The second week of the NFL showed that Pittsburgh steelers They are not as strong as it was thought after giving the surprise in Buffalo the previous Sunday, since this day they lost at home against the Las Vegas Raiders; on the contrary, those who they won visiting were the Dallas cowboys, like the San Francisco 49ers.

So you know how your team and absolutely all the franchises did this Sunday, September 19, here you have the Week 2 results with videos of the highlights on every battlefront.

After leaving a very pleasant impression in the opening game despite the loss to Tampa, the Dallas cowboys visited one of the teams contending for playoffs in the American League and with rushing touchdowns of Ezekiel Elliott and Tony Pollard they beat Los Angeles, although the decisive play was Greg Zuerlein’s 56-yard field goal With the clock running out

Two rivals from the AFC North and two wins for Las Vegas Raiders at the beginning of the campaign; Last Monday it was against the Ravens and now they got to Heinz Field in Pittsburgh to beat Ben Roethlisberger and company despite not having their starting running back, Josh Jacobs, but they made up for it with an aerial attack led by Henry Ruggs III with 113 yards and a touchdown.

The Mac Jones’ first win at New England as a professional in the NFL. He made 22 of his 30 passes for 186 yards and his main task was to avoid mistakes or deliveries of the ball; on the ground was how those led by Bill Belichick did damage with Damien Harris and James White.

Another devastating display of Tom Brady at the Tampa Bay checkpoints with five passes to the diagonals and nine in total after just two games. This time he connected twice with Mike Evans and Rob Gronkowski, and the last one with Chris Godwin. Added to that, defender Mike Edwards scored twice returning interceptions.

Philadelphia could have gotten points from practically its first four offensive series, but settled for just one field goal and paid dearly against a huge defense like San Francisco’s. In attack, Jimmy Garoppolo passed for a TD and ran for another, although the most striking move was the shock to Trey Sermon.

An NFL team versus a student team, this is how the confrontation between Buffalo and Miami looked, a team that to top it all lost his quarterback, Tua Tagovailoa, through injury, in the first half. The Bills made the running attack their mighty weapon with two touchdowns by Zack Moss and one more by Devin Singletary, on a low-key afternoon by Josh Allen with less than 200 passing yards.

Seattle blew away a 24-9 lead at halftime and overtime Tennessee took the game out with a field goal the newly activated Randy Bullock, who made four out of five attempts. The one who was irrepressible – unlike his discreet first week – was Derrick Henry with 35 carries, 182 yards and three touchdowns.

What a great game in the desert that Minnesota let out missing an automatic field goal of less than 40 yards with the clock dying, adding their second adjusted loss of the season because in Week 1 they fell in overtime at Cincinnati. This Sunday, Kirk Cousins ​​and Kyler Murray threw three touchdowns each.

From beating the Green Bay Packers to being inoperative in Carolina; that seems to be the story of New orleans with the inconsistent Jameis Winston at quarterback, who this time barely passed for 111 yards. For their part, Panthers – who lost a while of the game to Christian McCaffrey due to cramps – they scored twice by air and once by ground.

Nick Chubb had 95 yards and a touchdown rushing as the best of Cleveland’s offense, which didn’t look as explosive as it did in Week 1 against Kansas City, but did what it took to defeat Houston, for whom the quarterback Tyrod Taylor was injured.

Andy Dalton’s reunion with his former team was short-lived because the quarterback was injured and Justin fields took the controls of Chicago, whose defense was the key to defeating Cincinnati, who scored two touchdowns in the last six minutes of the game to make it exciting, but the other three-quarters of ineffectiveness paid dearly.

Los Angeles’ second mighty exhibit, now visiting Lucas Oil Stadium in Indianapolis. Cooper Kupp is Matthew Stafford’s weapon of choice and they connected twice in the end zone, plus a seven-point carry by Darrell Henderson, who was hit by a rib in the fourth quarter.

The expectation in Jacksonville with Trevor lawrence it’s going down the drain my soon because they added their second defeat, in which the marshal barely passed for 118 yards, one TD and two interceptions. Now it was Denver that beat them with Teddy Bridgewater throwing for 328 yards and two TDs.

This was the first game on Thursday of the 2021 Season and he was cardiac with multiple exchanges of leadership, until the Football Team with Taylor Heinicke as quarterback – due to the injury of Ryan Fitzpatrick – had the last series and they left Dustin Hopkins in position to win it with a field goal.