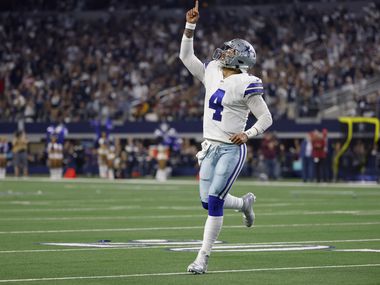 Denver – Micah Parsons has become leader of the Dallas Cowboys.

After a recent road win for the Dallas Cowboys, wide receiver Simi Fehoko tweeted: “I was just trying to find my seat on the plane and Micah tackled me. No one is safe “.

Everyone seems to have an opinion on rookie linebacker Micah Parsons.

The do-it-all defender combines uncommon versatility: He lines up as linebacker, defensive end and even over center, with stubborn determination as he chases quarterbacks and continues to rack up all-time NFL records and stats.

Parsons’ 13 sacks are within one and a half of the rookie record set by Jevon Kearse of the Tennessee Titans in 1999.

Parsons is already the first rookie in 15 years to have a dozen sacks and three forced fumbles.

With 79 tackles so far, Parsons has a chance to hit triple digits in tackles.

He has a good chance of becoming the first player in 40 years to sweep the league’s top two defensive awards, Player and Rookie of the Year.

The previous one to do that was American Football Hall of Famer Lawrence Taylor in 1981.

“I’ll say it’s hard to have expected to see what he’s up to,” Cowboys executive vice president Stephen Jones said of Parsons.

“Who could have thought that they could do all that and be able to line up in all those different positions and do it?”

Parsons did think so.

The first glimpses of his ambition were manifested during the HBO series “Hard Knocks” in training ground.

Parsons begged to be in every preseason game and wasn’t happy when he didn’t.

He told an assistant coach, “The lion is always hungry,” and that motto has haunted him ever since.

Parsons did not play his final college season to avoid the covid-19 pandemic and was selected by the Cowboys last April.

Dallas dropped two spots in the draft after two cornerbacks the club was looking for in the draft were taken.

Jaycee Horn from South Carolina went to Carolina and Patrick Surtain II from Alabama was chosen ninth by Denver.

Now, Parsons leads a defense looking to give Dallas its first NFL title in 25 years.